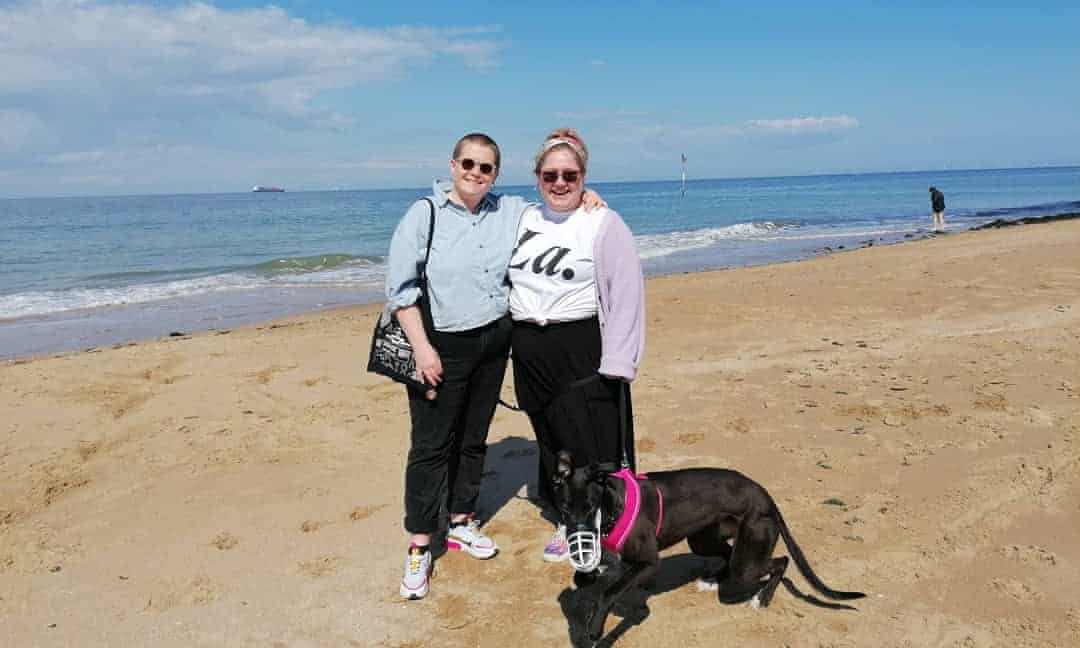 The pandemic made dating a lot more complicated – but it didn’t stop it. Here, seven couples share their stories

Jenny says: During the first lockdown, I matched with Sophy on Hinge and we had our first “virtual date” on the phone. Luckily, we didn’t have the cameras on, as it turned out Sophy was in the bath the whole time. We chatted for more than an hour, so she turned into a prune.

Once we were allowed outside, we went for a drink in Elephant and Castle in London. We went on to have a lovely summer of park dates and adventures in between Sophy’s crazy schedule of nursing shifts. Fast-forwarding to October, we both contracted Covid and went into quarantine in my very small studio flat. If you can survive 10 days in a room together, you can survive anything, right?

After a slow recovery, we decided to fulfil lesbian stereotypes and move in together. We are now happily living our best lives in Margate. If you had told either of us a year ago that we’d be in a relationship and living by the seaside, we wouldn’t have believed you.

‘We booked flights to Berlin on our first date’

Kelvin says: My school friend Emily is a good matchmaker: I met my first girlfriend through her when we were at university. Then, last summer, Emily came to the Trinity Arms in Brixton with a few friends from university, including the now love of my life, Natasha. We didn’t speak much on the night, but she did compliment me on my music taste and my bicycle, so we agreed to go for a cycle. At the time, I assumed she was seeing someone else and treated it merely as a wholesome bike ride.

Anyway, after many glasses of Aperol spritz, it transpired we were single – and we stupidly booked flights to Berlin immediately. We then realised that none of the bars, nightclubs or Christmas markets would be open. We decided to scrap Berlin and work from Portugal for a few weeks in October. It’s safe to say the relationship has remained chaotic, fun and loving ever since.

‘We only had each other for company’

Nicholas says: We had our first date a couple of days before the national lockdown in March 2020. It went so well that we ended up in a bubble. We live alone most of the time, so we spent a huge amount of time at each other’s flats in Hackney, London.

It was odd, at first, since it was so early in our relationship. In normal times, it would have been diluted by meeting up with friends or going out to gigs or other events. As none of that was allowed, we only had each other for company. We soon realised we were happy just the two of us.

Jade is from the Netherlands and has been unable to see her friends and family. We’re desperate to go travelling again. We are very much in love and it has made a challenging year so much better.

‘We formed a bubble the first time we met’

Vishav says: Doctor life was hectic and gloomy last year amid the pandemic and lockdowns. I was also single, with no family in the UK. I then stumbled upon a Canadian called Shivani, also a medical doctor, on a dating website. We would share our routines and spend hours daily talking on the phone.

At the time, Shivani was working in Coventry and I was in Gloucester. It took us three months to meet for the first time, when we formed a bubble together in line with Covid rules. She invited me to her accommodation and cooked a big lunch for me, which I remember precisely: lentil soup, a spinach curry called palak paneer and naan breads. I was very impressed by her culinary skills.

I soon proposed and we got engaged in October. We continued our relationship, staying in Coventry and Gloucester, since our work commitments kept us apart. But, finally, in April, we married. We are still under restrictions, but the love affair continues. The pandemic times were tough, but these memories will stay with me for life.

‘It was all very Victorian’

Camilla says: John and I matched on Tinder in April last year and messaged a lot before we met, at the end of May, when lockdown lifted partially. All we could do was walk together, so that’s what we did for our first two dates. It was all very Victorian. He was living with his parents and I have auto-immune issues, so we needed to take it slowly even when lockdown started to ease. Our third date was drinks outside. One year on, we’re about to move in together.

We both say that the slow start was a great thing for us. It was good to get to know each other the old-fashioned way. When we were properly together by the third English lockdown in December, we had a lovely time cooking, walking, playing Scrabble and drinking bubbles. We feel lucky to have met each other during such a tough year.

‘He wore a mask, which was thoughtful’

Carolina says: I am Chilean-Spanish and have lived in the UK for almost 17 years, working as a scientist. I was locked down with my daughters, which meant cooking twice every single day. I do not like cooking. My elderly parents live in Spain and the news coming from there was not good, which added to the stress.

Three months or so into lockdown, I started to behave out of character. I planted vegetables in my garden, I started to run, I meditated, I got a sewing kit and I downloaded a dating app for the first time. I just felt compelled to do something for myself. I had no plans to have a relationship or to fall in love; I was just looking for a bit of fun.

At the end of September, my now boyfriend caught my eye and I swiped right. We met for a coffee and he arrived with a mask, which was thoughtful (masks were not compulsory at the time). We talked the whole hour, I asked him for his number and we took it from there. When the second English lockdown came along, we had the bubble conversation. We spent Christmas Day together – and he cooked.

Even though we have been together for a relatively short time, it has been quite intense, since we didn’t see anyone else. We still haven’t met each other’s friends. They say that two months of a lockdown relationship feels like two years – and it certainly does. We have already watched quite a few box sets.

‘We have a surprise baby on the way’

Aaron says: I’m a biomedical PhD student. After my lab closed during the first lockdown, I answered the call and volunteered to work at the Milton Keynes lighthouse laboratory conducting qPCR testing on Sars-CoV-2 swab samples. I thought I’d only be here for a few months, but we’re still here.

When I started in the lab, we were split into four groups and I joined team three. A few of us car-shared between our hotel and the lab and we became friends. This was how I met Chloe, a final-year biomedical science student at the University of Hull.

In the summer, when the national lockdown eased, a large group of us went on a trip to Snowdon in Wales. Chloe and I got separated from the rest during the climb and we ended up spending the day together. We spent more and more time together from that day onward. We are still testing, but have now moved out of the government-sponsored hotel and into a lovely flat in Bakewell. We have a surprise baby on the way, who is due on my mum’s birthday. My mum passed away 23 years ago, so I hope the baby is on time.