The number of solar panels being installed in the UK has fallen by more than 80 per cent, according to an analysis of new figures in the latest sign that the industry is being strangled by government policies despite being one of the cheapest sources of electricity.

The Solar Trade Association (STA), which produced the figures based on recently released government statistics, found the first three months of this year had seen a catastrophic collapse in the number of solar panels being put up following the withdrawal of virtually all subsidies, a stunning business rate hike of up to 800 per cent and the imposition of “red tape”.

No form of energy generation – renewable or fossil fuel – can currently be built without some form of subsidy and the STA stressed it was simply seeking a “level-playing field”.

Overall, there was an 81 per cent decline in new solar panel capacity compared to the average over 2016.

The STA said it was particularly concerned by a 65 per cent drop in the number of large-scale solar schemes on hospitals, factories and other large buildings, which may well have been caused by the business rate increase. The figures equate to just one large factory roof having solar panels fitted every month in the whole of the country.

And the number of people putting solar panels on their homes is now at a six-year low.

Between January and March, there were about 650 rooftop deployments a week – a fall of more than 75 per cent on the long-term average of 2,700 a week since 2010. 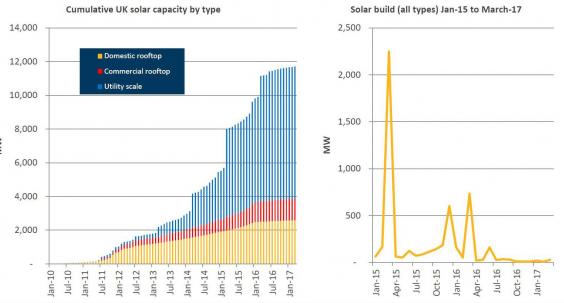 Solar has grown rapidly in the past few years, but installations have now crashed (Solar Trade Association)

The number of new solar farms, producing large amounts of cheap and green electricity for the grid, has also crashed after being “shut out of a heavily distorted electricity market”. New installations are running at about an eighth of the level in January last year.

Under government rules, solar has not been allowed to bid against other power generators for contracts to supply electricity at a guaranteed price even though it is in a position to save money for consumers.

Paul Barwell, the STA’s chief executive, said: “At a time when we need more generation, the Government is hindering market competition against the best interests of consumers by suppressing the tremendous potential of solar power in the UK.

“Solar is being needlessly impeded in the UK by shock taxes, red tape and by a serious failure in the only remaining supportive policy.

“We urge Government to act now to stabilise the industry.”

He stressed they were not asking for any new rooftop subsidies “despite clear difficulties”.

“What we are asking for, and urgently, is fair tax treatment, fixes to a failing policy, less red tape and just a level playing field,” said Mr Barwell, who insisted the Government would not be able to “thwart technological progress”.

“It makes no sense to shut the most popular and cheapest clean power out of the energy market.

“That’s the last thing that consumers and a healthy, competitive market needs.”

“Whether deliberate or not, the UK Government is acting to frustrate the success of this technology and the solar industry here in the UK,” he said.

However, such complaints fell on deaf ears in Whitehall.

A spokesperson for the Department for Business, Energy and Industrial Strategy said: “This Government wants Britain to be one of the best places in the world to invest in clean, flexible energy.

“Solar power is a great success, with more than 11 gigawatts of capacity installed in the past five years – that’s enough to power more than 2.6 million homes with clean electricity.”

Nina Schrank, an energy campaigner at Greenpeace UK, said: “The UK is missing its moment in the sun. Globally there has been record installation of solar panels. Solar technology is improving, costs are falling and forward-thinking nations are harnessing the power of the sun for clean, green energy.

“But UK ministers are stifling this cutting-edge industry instead of seizing the opportunity for jobs, investment and cheap energy. Damaging tax hikes are making solar investment uneconomic for the UK.

“Our Government could be cutting off an entire sector, with major growth potential, at a time when we need strong industries and action on climate.

“They should put their money where their mouth is, and provide the necessary support to actually allow the solar industry to be the great success it should be, rather than holding it back unnecessarily and burying their heads in the sand.”