Rising from the waters of Guanabara Bay, the Museu do Amanhã, or Museum of Tomorrow, is Rio de Janeiro’s most visited museum. Santiago Calatrava designed it; it cost $100m to build, was heralded as one of the main draws for Rio in the run-up to last year’s Olympic Games, and has been credited with the regeneration of the entire port area.

One mile west of the much Instagrammed building stands another museum. Few visitors hear of the Instituto Memória e Pesquisa Pretos Novos, or IPN. Despite its 21-year existence, the privately run museum has received consistent financial support from the city for just the past two years. But that support – around £1600 a month – ended earlier in March. Without a consistent cash flow, the museum announced four weeks ago, it must close.

Yesterday, it got a stay of execution. Having announced plans to close on 31 March, supporters raised enough money to secure its existence for April. Yesterday, following crisis talks with local authorities, it received £2040 to see it through till May, with a plan to fund “basic activities” for another year. But beyond this month-to-month existence, its future is uncertain. And its programme of exhibitions, workshops and courses remain unfunded.

Museums close all the time, of course, but the IPN isn’t just a museum. The “Institute for the Memorial and Research of the New Blacks” is the final resting place of up to 30,000 enslaved Africans, who were shipped to Brazil in the 18th and 19th centuries and died on arrival in Rio de Janeiro. 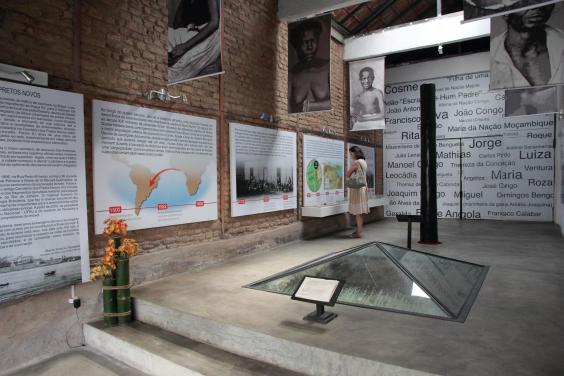 The IPN is part museum, part memorial to the enslaved Africans dumped at the site (Wikimedia Commons/Halley Pacheco de Oliveira)

“When we first uncovered the [skeletons] no one wanted to do anything with them,” said Merced Guimarães, who runs the museum from her own home (the site was discovered when she had builders in; she promptly stopped the work and turned her house into a memorial). “No one wanted to research them and take care of them. But we fought and fought. We built all of this and now they are continuing to disrespect the dead.”

The parlous state of the IPN – “pretos novos” means “new blacks” – is, some say, the latest example of the systematic whitewashing of Rio’s heritage. At the tourist information point by the Museu do Amanhã, visitors can pick up information about the new Olympic Boulevard and the regeneration of the port area. The Brazilian tourist board waxes lyrical about the Santa Teresa tram and gliding off Pedra Bonita, but the IPN merits only a small listing in the museums section. 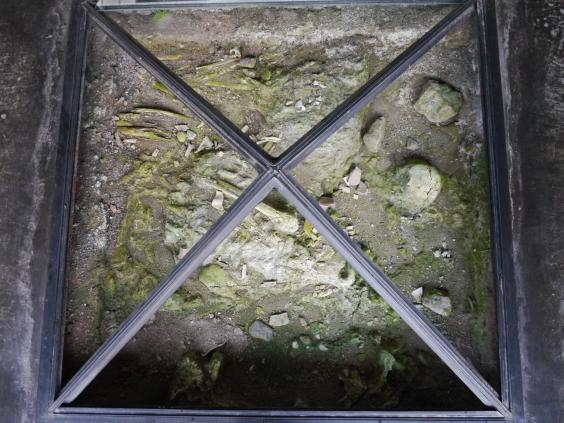 Afro-Heritage tourism in Brazil is usually synonymous with Salvador, the capital of Bahia province. But Rio received more enslaved Africans than Salvador – more than two million arrived at the port, where the Museum of Tomorrow now stands, between 1500 and 1856. More enslaved Africans landed here than in any other port on earth.

“I always thought of Rio as a tropical getaway full of shopping and beach lounging,” Ashleigh Reddy, an American tourist visiting the IPN this week, told The Independent. “It feels like black history needs to be erased from Rio to sell it as a cosmopolitan destination.” 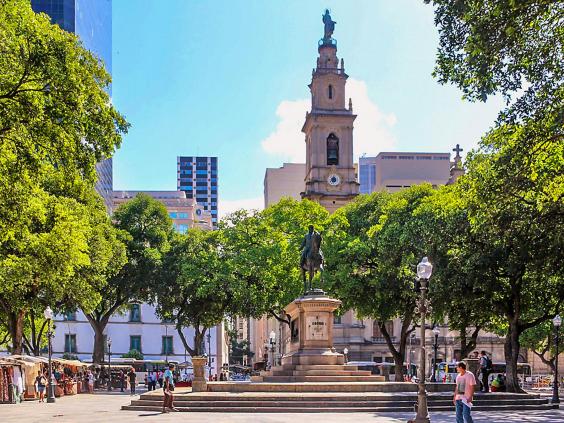 The port area – now billed as Rio’s ‘newest’ district – is strongly intertwined with the Atlantic slave trade. Sites include Praça XV de Novembro, a square beside the ferry terminal, which was the site of Rio’s original slave auction; Igreja de Nossa Senhora do Rosário e São Benedito, the 18th-century “black church” that was the centre of Afro-Brazilian life; and the Pedra do Sal, or salt stone, known for its weekly outdoor samba party thrown by locals. Considered the birthplace of samba, Pedra do Sal is the historical centre of Rio’s “Little Africa,” a historical neighbourhood where enslaved Africans escaped during slavery.

“The weekly party has actually helped to create more interest in the history of the area,” Gracy Mary Moreira, founder of the Organização Cultural Remanescentes de Tia Ciata, told The Independent. “When tourists ask locals about Pedra do Sal, we always describe how the area was a place of resistance for blacks.” 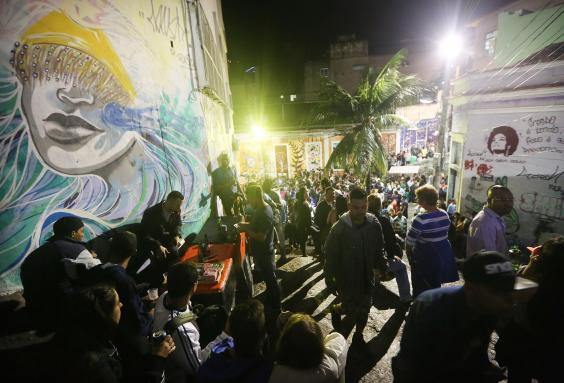 Pedra do Sal is now home to a weekly samba party, but it’s been a place of black resistance throughout history (Getty)

As has happened with Pedra do Sal, the promotion of the port area’s African and Afro-Brazilian history has largely been a feat undertaken by private entities and individuals. Guimarães was renovating her house in 1996 when workers uncovered the remains of 26 Africans. Their bodies – aged between three and 25 years old – had been dumped and incinerated; archaeologists estimate that more than 6000 enslaved Africans who had died on the transatlantic passage were buried at this site, with 30,000 dumped in the surrounding area. Guimarães turned her house into a museum, at her own expense. Over 72,000 people have visited over the past two decades, but she told The Independent, “I can’t charge people to visit a cemetery.”

She’s not the only one who feels queasy about charging people to learn about Rio’s Afro heritage.

“I can’t bring myself to be just another person making money off of black bodies,” historian Sadkane Baroudi told The Independent. Baroudi offers a self-guided tour via her website, but also offers full-day guided visits to those who request them and refuses to charge a fee. 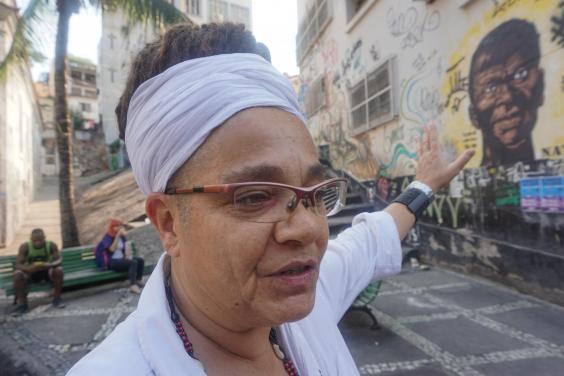 For her, it’s more important to bring visitors face to face with the more shameful parts of Rio’s history – at a time when she feels the city is covering them up and letting existing monuments deteriorate.

“To put [the Museum of Tomorrow] at the exact location of the slave port is a gross slap in the face,” she said.

A plaque that once explained Pedra do Sal’s history has deteriorated so much that it has been removed. Local authorities created an ‘African Heritage Circuit’ as part of the pre-Olympics port regeneration, yet few know of its existence. 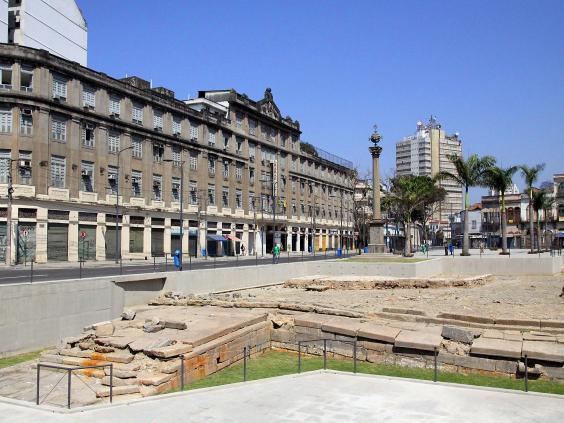 Valongo Wharf, where over 500,000 enslaved Africans were brought, gets no more than a plaque (Creative Commons/Halley Pacheco de Oliveira)

In 2011, when construction work uncovered the Cais do Valongo – the wharf where more than 500,000 enslaved Africans docked between 1811 and 1831 – locals campaigned for the port area to be transformed into an Afro-Brazilian cultural destination; instead, they got a plaque. Plans to build a proper public memorial at the wharf have been stymied even though an elaborate design already exists. UNESCO will add to its World Heritage list in July, and the Cais do Valongo is in the running. But Guimarães is sceptical as to whether the authorities will support the bid.

The city’s new culture secretary, Nilcemar Nogueira, has lofty dreams of building a “Museum of Slavery and Liberty” near the wharf, and last week, Rio’s authorities announced plans for it to work in tandem with the IPN. But the behaviour of new mayor Marcelo Crivella has sown doubts as to his commitment to the city’s black heritage. An evangelical pastor, he failed to appear at a single carnival event this year, the first mayor ever to boycott the event. His absence and silence from some of Rio’s largest Afro-Brazilian festivals and religious rituals since taking office in January have also raised eyebrows. 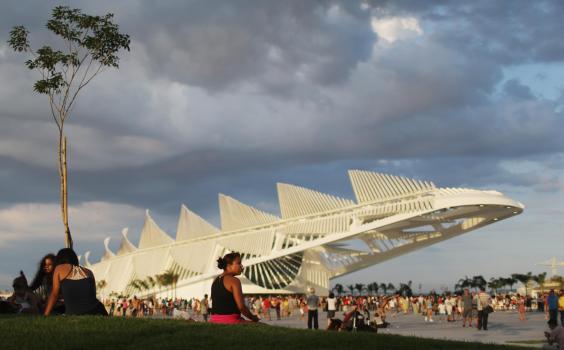 Ten minutes west of the Cais do Valongo, the IPN lives to see another day – or so the authorities say. Beyond their promises, though, the future is uncertain. If, in due course, the museum closes, Guimarães will remain in her home – but, she warns, the bones may have to be interred.

“We had to agree [to the funding deal] or we would close,” she told The Independent last night. “We will keep fighting to demand that the government keeps the memories alive.”