As a photographer who specialises in capturing births, maternity and newborn babies, Nahomie Hann has come face to face with the blood, sweat and tears of labour more often than most. But the culture of fear and uncertainty surrounding the process of bringing a tiny person into the world meant that even she was unprepared for what it would be like.

“The excitement died very quickly,” says Hann, who is from Canada and lives in Glasgow with her husband. “We’ve all seen the movies where the pregnant woman’s water goes, she is rushed to the hospital and by the time she gets there baby is about to arrive. Well, if you expect childbirth to be like in movies, it’s not,” she says bluntly.

Instead, Hann’s first birth in 2012 was “traumatic” she tells The Independent. Determined not to repeat the experience a second time two years later, she did a little digging and discovered the Positive Birth Movement (PBM) which she, like other women, swears transformed her view of pregnancy. The grassroots organisation aims to demystify pregnancy and childbirth with free-to-attend antenatal sessions and social media groups where mothers can share their experiences and ask questions without judgement.

Founded four years ago, the PBM comes as part of a push for honest parenting, with mothers and fathers speaking openly about how tough having and looking after children can be. And it seems this shift in attitudes couldn’t have come at a better time. Birth rates in England and Wales rose from 697,852 in 2015, up from 0.4 per cent from 2014. Meanwhile, our understanding of childbirth is developing. A recent study at Bournemouth University found that portrayals of childbirth in the media affect how people see the process, and highlighted that “normal” births are missing in pop-culture. And at least one in ten women have avoided pregnancy altogether because they have tokophobia: a deep fear of pregnancy and childbirth, according to the NCT. Triggers can include hearing negative stories, watching programmes depicting shocking birth experiences, as well as miscarriages and stillbirths. Pain and a loss of control during labour are also common. 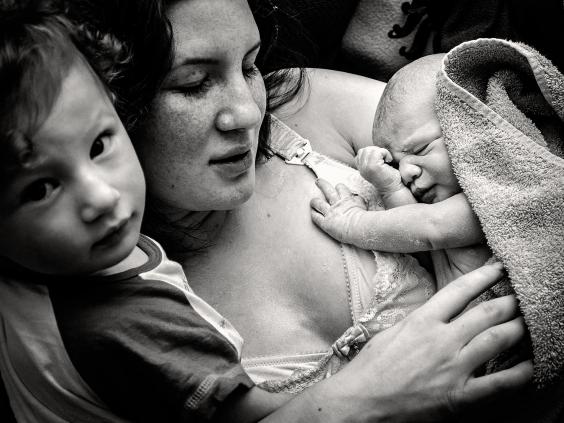 “I just thought I’d have a group of women round to my house to have tea and cake and talk about birth,” says Milli Hill, the founder of the PBM, a former therapist and mother of three child living in Somerset. Now, there are over 450 groups globally, including 250 in the UK alone. And Hill recently released a book entitled The Positive Birth Book: A New Approach to Pregnancy, Birth and the Early Weeks. This has received praise from Cathy Warwick, Chief Executive of the Royal College of Midwives, who called it “a great read: honest, lively, fresh and helpful. This book puts women in the driving seat which is key to positive change”.

Hann wishes she had known about the PBM sooner. When her water broke when she had her first child, she says she was told by medics that she would “ideally” give birth in 24 hours. When she was admitted to hospital, she says “I would be told from time to time to ‘calm down’ because it was not real labour and I was going to know pain then.”

If you expect childbirth to be like in movies, it’s not

“I was forced and held down on a mattress because foetal monitoring had to happen. I was lied to that it was mandatory and couldn’t be refused.”

“I was then fully dilated but having been restrained and my legs held down and closed by a midwife meant that my body couldn’t even attempt to try doing what it should have had. The midwife realised her mistake too late, refused to wake up my husband and left the room with my weighted down my blankets calling for my husband or someone to help me and remove the monitor and help me move.” She was then rushed to theatre.

“That is when an angel walked in in the form of a lovely anesthesiologist who heard my wishes, cleared my space, asked for my husband to be brought in first and made sure I was heard.” She believes the ordeal could have been avoided if she had been better-informed about her options during labour and had not expected an unpleasant experience.

“I think I was very naive when I went through the midwifery unit’s doors for the first time,” she says. Depictions in TV and film and stories she’d head “in hushed tones in supermarkets or waiting rooms” had her confused. She trusted that she would go to hospital, be told what to expect next from labour and “be walked through every step of the way and taken care of”.

“After my first birth I felt at a great loss as to the entire experience. Bonding with my little girl came from surviving an experience where we both had been completely powerless,” she adds.

“Here is what is scary about childbirth,” she goes on: “being treated for nine months like the most glorious representation of womanhood, complemented, treated with care and respect only to be treated on the day that should be the crowning day – pun intended – of pregnancy as less than an animal, with little to no respect or dignity, no real information, emotional blackmail over giving up your rights, misleading information and isolation.” 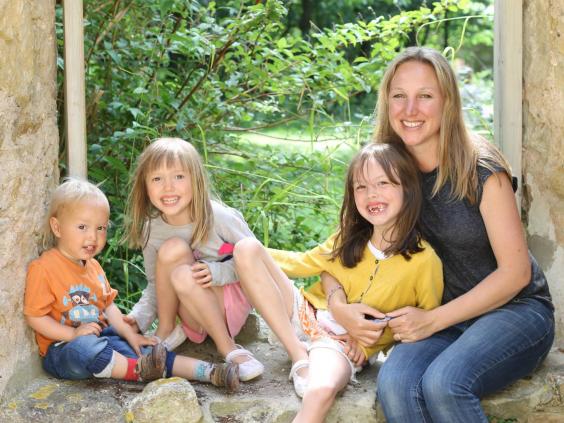 Milli Hill founded the PBM four years ago. Now, there are 450 groups worldwide

But what struck Hann about the cautionary tales she heard was that they rarely involved medical emergencies. The scary parts of these accounts could have been avoided. Meanwhile, women who had experienced near-death experiences were too afraid to speak out in case they disturbed the idea that they were “good” mothers or scared their peers.

“A lot of the scary birth stories are scary because they are a tale of women being stripped off their voices, manhandled by medical providers then handed over a baby and expected to go on with life as if everything that had just happened was the most normal thing in the world, that since you had a baby in your arms all the hassle, pain, trauma, violence, disrespect and so on, was worth it and had been necessary,” says Hann.

The PMB helps women by helping to prepare for birth in a way that best suits them, be that a birth in hospital or in a water bath at home. It asks women to question everything they have absorbed about pregnancy and childbirth – from horror stories from friends and families to depictions of labour in the movies – and to honestly consider whether they are afraid and how that can be changed.

In the book, labour itself is dissected into phases in chapters: from The Cracking on Phase, to Crowning, The Head Being Born, Baby in Arms and The Tea and Toast Phase. Sections entitled “Will there be lots of blood” and “What about poo? Will I poo myself in labour?” take a no-holds-bar approach to pregnancy.

Hill defines a positive birth as one where women are where they want to be; who make choices that are informed by reality not fear; who are listened to and treated with respect and dignity; feel empowered and enriched; and are left with memories that are “warm” and “proud”.

Megan Porter, who lives in Falkirk, Central Scotland, had the opposite experience to Hann but was equally confused by pregnancy. Porter, who runs a designing and painting business and the blog The Mother, has a three-year-old son and a two-week-old daughter. After hearing stomach-churning stories about women being horrifically torn, she was preparing herself for a harrowing birth.

“It was not what I expected at all, in fact it was amazing. I didn’t expect my body to just know what to do and I definitely didn’t expect to come out both times with no stitch in sight. Yes it was sore but not in the way I expected, it was very surreal and really empowering.” So, she convinced herself that she would “pay” for her positive first birth with her second.

“How could I be THAT lucky?! I was certain something was going to go wrong.” Luckily, her doula introduced her to the PBM in the last few months of pregnancy. 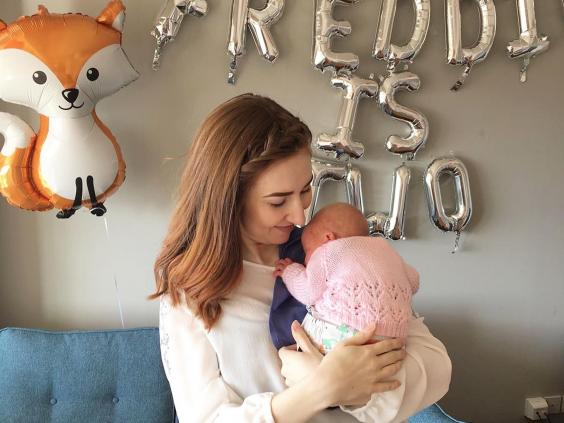 “I went from being a nervous wreck convinced this time was going to be hell to being scarily calm and so well informed on all my choices.”

“The book made a huge difference too. I used it to make our visual birth plan, up until then the birth plan had been stressing me out as I had no idea how to put what I had in my head onto paper.”

Hill says it was these attitudes that lead to the PBM organically forming into what it is now.

Yet, what the group offers women is startlingly simple. There’s nothing high-tech involved, no ground-breaking techniques. Rather, it helps women to inform each other and access the treatment that suits them best, understand what their bodies can do by removing facts from fear, and encouraging women to share their birthing stories both positive and negative. And that doesn’t mean making birth sanitised and stripping away anxieties – which Hill stresses is perfectly normal – or making pregnancy and labour into a freak show.

“What’s not ‘normal’ is for the fear to take over,” argues Hill. “At the moment I worry that it has an unhealthy grip not just on women but on midwives and obstetricians which can lead to defensive practice and a lack of personalised maternity care built on human connection – which ironically is safer and more satisfying for everyone involved.”

“What we need to be talking about is rights in birth, dignity in birth, listening to women and respectful care.  Women who experience this usually feel good afterwards, whether they had tea lights and a birth pool or blue lights and surgery.”

Hill advises women – whether they are mothers or apprehensive first-timers – is to take an active role in the birth and learn and your options and human rights.

“Making a plan, and learning about the physiology of labour and how to create the best possible birth environment, for example, can be really helpful. Even if you have a caesarean, there is still loads of info out there to help you improve the experience. And at the end of it all, of course a healthy baby is what matters, but it’s not all that matters. Women, and how they feel afterwards, and how their partners feel, that matters too,” she says.

Now, Hann is pregnant with twins and is trying to pass on what she has learned the hard way to her daughters, who accompany her at midwife appointments and understand what happens to the body during pregnancy.

“My daughters know about what their mother’s body is doing currently being pregnant, they ask questions and get honest answers and my four year old Lilly remembers being present for her sister’s birth. She is not scared. She is excited. Birth is natural.”