The latest glossy openings and faux-speakeasies tend to grab the column inches when it comes to New York City’s bar scene. But there are still a few watering holes in New York that started serving long before Trump Tower was built, before Prohibition came and went, before the United States even became an independent republic.

The best of these old saloons and taverns continue to exist almost timelessly. Some agreeably shabby, others lately renovated, they make space for visitors to mix with locals and mingle with the city’s ghosts. Here are five to try on your next visit.

This spit-and-sawdust Irish pub has scowled at every social change since opening in 1854. One cast-iron house rule stated “men only” until city legislation finally forced the owners to admit female patrons in 1970. On a Wednesday night in early 2017 the place still seems a living shrine to its own past, give or take the flat-screen TV. 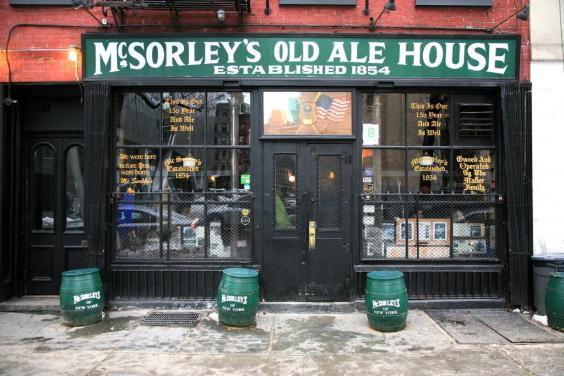 The walls are scarred with ancient, hieroglyphic graffiti, carved right into the original wood, and the bar is festooned with historic curios, from Harry Houdini’s handcuffs to wishbones left behind by regulars who never came back from the First World War. Its present, independent owners do not cater to contemporary tastes and choices – the only two drinks available remain McSorley’s own light and dark ales, each pint poured in two old-school half-pint mugs by barrel-chested, shaven-headed Irishmen.

The atmosphere is entirely convivial though, the dim lighting and ambient hubbub creating something of a 19th-century mood. Except of course for the welcome presence of 21st-century women, a group of whom are discussing quantum mechanics at the table beside mine.

Celebrating its 200th anniversary this year, the bar on the bottom floor of Soho’s historic James Brown House has sold booze in various incarnations since 1817. It’s been a tavern, a liquor store, a speakeasy, and a club for longshoremen from the Hudson River dockyard down the street.

According to my bartender Barbara, there used to be a brothel and a smuggler’s den upstairs too. Pouring me a pint of Ear Inn Ale (made specially by Brooklyn Brewery), she says the place is supposedly haunted by the ghost of a sailor called Mickey, who was either killed by a car or died of drink while waiting for his clipper to come in, depending on who you ask. “I work the day shift,” says Barbara, “so I’ve never seen him.” 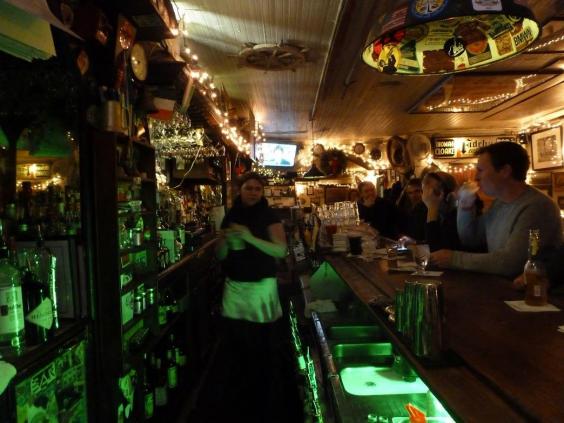 This afternoon the bar gives off a modern, greenish neon glow, while English and Irish regulars watch an Arsenal-Chelsea match on the TV. Current owner Martin Sheridan does his bit to preserve the old days by asking customers to refrain from mobile phone calls.

Pete’s first opened in 1864, when Lincoln was president and the civil war was still raging. It has kept its original tin roof and tiled floor, and the walls are decked with portraits of famous patrons, from former mayors to Johnny Depp and Angelina Jolie “celebrating” the release of their woeful movie The Tourist.

My bartender Garrett, a fellow Irishman from County Monaghan, is an amateur historian of the place. He says he often thinks about the staff and patrons who have come and gone, and wonders if their spirits pop back in sometimes. During Prohibition, the front section became a flower shop to hide the speakeasy in the back.

He invites me to check out old photos in the rear dining area, where an elderly lady looks up from her “Spaghetti a la Pete’s” to point out her grandfather in one of them. He was a city politician at nearby Tammany Hall, she tells us. So he opposed Prohibition, I ask?

“Well, what do you think? He was in here every day.” 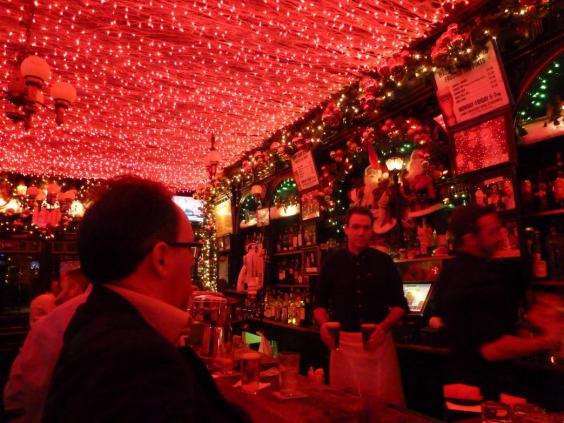 Now dwarfed by the surrounding financial towers of Broad Street and Wall Street, this is the bar in which General George Washington said farewell to his officers on December 4, 1783, after beating the British in the Revolutionary War.

Today the upper rooms house a rich gallery of paintings, weapons and artefacts from that period, while the bar and restaurant downstairs have been restored to something like their 18th-century appearance. They’re semi-separate entities, says museum curator Jessica Phillips, who enjoys pseudo-historical dishes like the “Jefferson Cobb Salad” while knowing very well that Thomas Jefferson never ate any such thing. 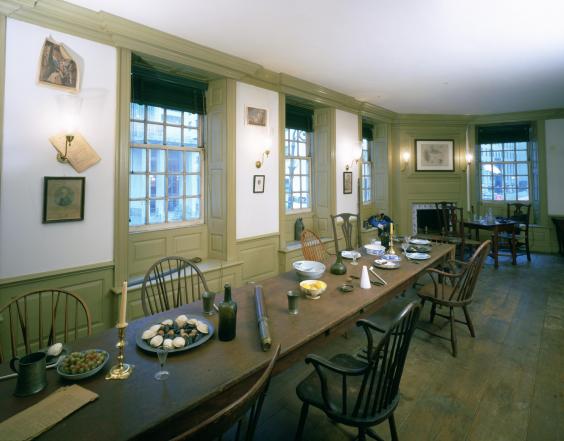 “If you want the real history, you come upstairs, if you want a good pint you go down there.”

Sure enough, the Porterhouse Bar does a really excellent Oyster Stout.

Socialist socialite Leland Chumley opened his own joint in 1922. It was an HQ for fellow members of the Industrial Workers of the World, and a hangout for writers like William Faulkner, Orson Welles and the Fitzgeralds, who supposedly drank here on their wedding day. Table 26 is now a shrine to that unhappy couple in the newly reopened Chumley’s. 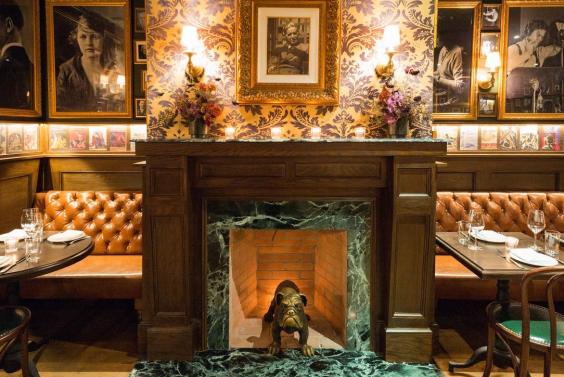 Closed for a decade after a chimney collapsed, I find the place beautifully fixed up by busy owner Alessandro Borgognone. He’s restored the speakeasy feel, with no sign outside to help you find the place, and a cosy interior lined with leather, wood and brass, original photos and book jackets. “We wanted that old New York hustle and bustle,” says Bourgonone. “You come in for a cocktail or sit down for dinner. It’s not trendy, it’s classic.”

The house burger is now said to be the best in the city and people are booking weeks ahead, but there’s no special treatment for big names who want a table at short notice.