It was a relationship breakup that pushed Adam Nawrot into living in a van. Not because he was homeless, though; the filmmaker and photographer from New Jersey had often hankered after the lifestyle.

“I’d always had a fascination with the idea of living in a van, this archetype of the American nomad,” Nawrot, a climber, told The Independent. “There’s a long tradition of climbers and kayakers living out of their vans so they can pursue the idea of the ‘endless summer’ – where surfers would move south for the winter and north for the summer. So I thought of living in the van as a continuation of this tradition.”

Van dwellers, as they call themselves, are a growing community in the US. And despite what you might assume, they’re largely living in vans out of choice, not necessity. They sleep where they want to – whether that’s a beach, national park or salt flat – and curate social media feeds full of mouth-watering pictures. When Nawrot split up with his girlfriend of five years, he wanted a “rebirth”.

Adam Nawrot’s year in a van

“My life was on a path and didn’t feel exciting,” he says. “I just wanted to feel young again.” He was, it should be pointed out, just 23 at the time.

He bought a former NYPD surveillance van, and rechristened it “Gnarnia” – partly because he hoped he’d be going to places as mythical as Narnia, partly because “gnarly” is what extreme sports people call what they do. He took a month to refurbish it, adding not just a bed but a workspace with a desk, computer and two monitors (powered by rooftop solar panels) and a storage space for his climbing gear, complete with detachable axe (for climbing, not van-dwelling) as the handle. There’s no air con, no water supply and no bathroom, but that, he says, is a small price to pay for living the dream.

He lived in the van all last year, coming back to New Jersey regularly for work commitments between road trips. How many times did he criss-cross the country? “Well, there’s the vertical traverse as well as the horizontal one,” he says, struggling to count. Assume the answer is in double digits.

During his year on the road, he went to national parks like Yosemite and Zion (he prefers the latter), and compiled his favourite drives (the best, he says, is Route 70 west of Denver, which takes you through the Rocky Mountains to Grand Junction and Utah). The highlight of the entire year? White-water rafting down the 65ft Lower Mesa Falls in Idaho.

America is the ultimate road trip, he says, because “you can drive 600 miles in one direction and you don’t have to change currency or speak a different language. The road infrastructure is pretty good, so it really encourages this kind of travel”.

Van dwelling might seem like a solitary lifestyle but Nawrot’s certainly wasn’t. Firstly, there are van communities – in Seattle, where he spent some time, he says a group of them used a gym car park as a camp ground. But more often than not, he wasn’t flying solo – because the van only managed 11 miles to the gallon, he roped in travel companions to share the cost of petrol. 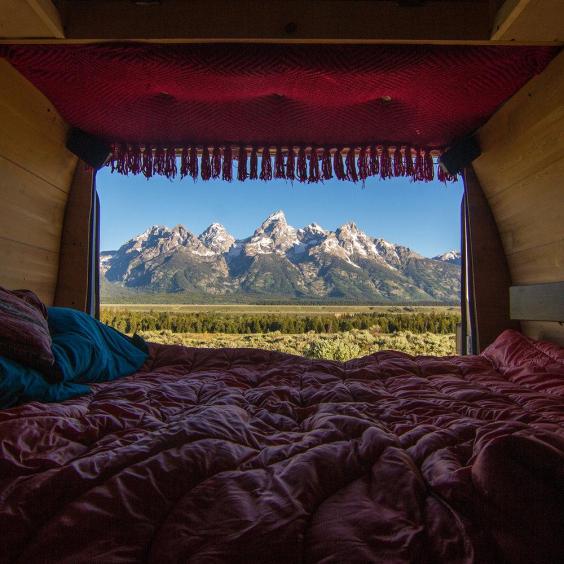 Gnarnia can sleep up to six people, he says: “One on the floor, one on the desk, two in the bed, you can sling up one in a hammock and, if there’s a short person, you put everyone’s stuff up in the front of the van in the cavity between the two seats and the person can lie across them like a mattress.

“You have to like them a lot,” he adds, with understatement. In winter, there are benefits to huddling up – the combined body temperatures work to keep the van warm. In summer, it’s a different story.

Nawrot’s life last year wouldn’t be for everyone – showering in gyms, at the beach or in hotel pools that he sneaked into, eating van-dweller staples that included dry ramen and oatmeal mixed with cold water.

Sometimes with a bit of chutzpah he got further. “The classic trick is to walk into the breakfast buffet at a hotel,” he says, noting that most of the time, breakfast is served just off the lobby. Sometimes he went one further, crashing buffet dinners. What’s the trick? “You just have to look confident.”

This year, he’s swapped the van for domestic life with his new girlfriend, who he met towards the end of his van-dwelling stint. Only during the week, though – at weekends, he takes off (this month, he’s returning to Utah). Luckily, his girlfriend is a fan of Gnarnia, because for Nawrot, the van will always come first.

There were low points to 2016 – namely food poisoning so bad that he had to abandon the van and crash with friends – but overall, Nawrot says last year was the best ever. 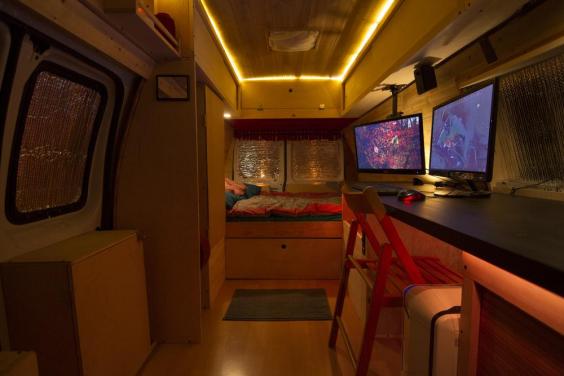 “I was just out of a five-year relationship, I was at the point where I felt my life was on a path, but it didn’t feel exciting. But everything felt fresh and new again after living in the van.

“It was the happiest year of my life, and it was the realisation of all I wanted to do,” he says. Luckily, at 24, he has a lot more van-dwelling ahead of him.