It is fair to say that when Manchester City visit Anfield on New Year’s Eve, the challenge posed to Liverpool’s defence by Kevin De Bruyne, Raheem Sterling and Sergio Agüero, if he’s recalled by Pep Guardiola, will be a bit different to the one here where the names involved for Stoke were Peter Crouch, Jonathan Walters and Mame Diouf.

And yet, for Liverpool – in front of a spying Guardiola – it proved to be the ideal warm-up for the most significant league fixture to be held at Anfield this season, largely because Liverpool’s evening was relatively comfortable, the last half-hour was played at practice speed and no injuries were suffered.

Liverpool have reacted well over the last ten days to Chelsea twice moving nine points ahead of them at the top of the Premier League table, instantly cutting that lead by a third with contrastingly carved wins in their next games. 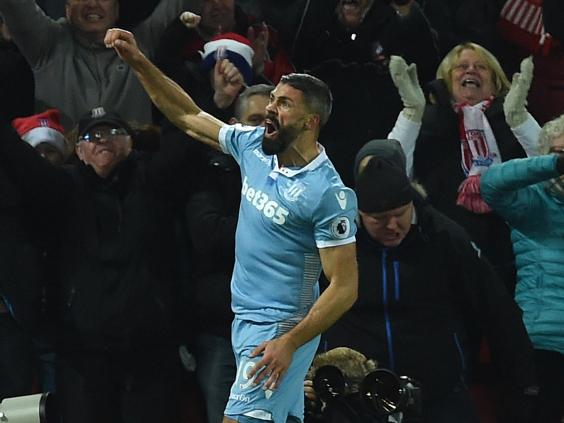 If Liverpool had to claw all of the points from Goodison Park in the Merseyside derby, the narrative of this story displayed other qualities because they had to find a solution to Stoke’s lead and fully recover. Ultimately, the final scoreline was reflective of Liverpool’s dominance and the margin of victory shows once again what they can do when the momentum is with them. Daniel Sturridge’s goal was Liverpool’s fourth and the 100th registered in the league by Jürgen Klopp’s team in the 48 games since his appointment.

Klopp, however, was right to concede that Liverpool’s performance was not perfect. “There were a lot of things we could have done better,” he said, admitting that Stoke’s approach had initially been unsettling, with Mark Hughes’s decision to use two strikers putting pressure on Liverpool’s defence.

Liverpool, indeed, were unbeaten in 22 games at Anfield and Stoke were the last team to triumph here. That result came last January, though it was an occasion laced in disappointment for Stoke because Liverpool ended up progressing from the League Cup semi-final second leg tie on penalties. 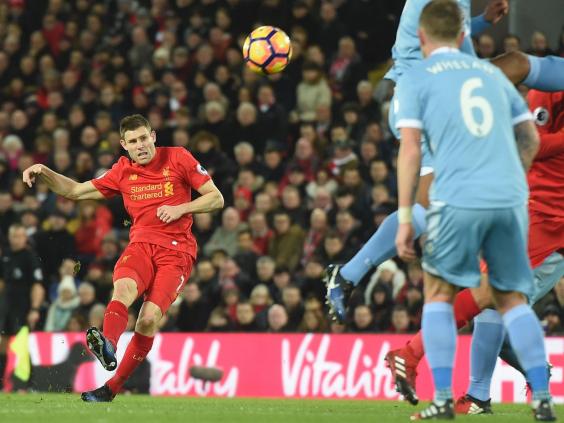 James Milner curls one into the Stoke box (Getty)

Mark Hughes repeated his decision from that night by inserting Crouch, aged 35, into his team for only the second time in the league this campaign. His and Walters’s mission in attack not particularly scientific: to try and disturb Liverpool’s supposed soft underbelly.

Their appointments were justified in the early stages because both were involved in Stoke’s opener. Crouch’s presence in the box required two markers and in the confusion after his downward header from Diouf’s cross was half-cleared by Ragnar Klavan, Liverpool were undermined by the things they failed to do during the second phase of play: Sadio Mané not getting close to Erik Pieters before he supplied a delivery into the danger zone; from there, Dejan Lovren was unable to stop Walters’s run across him and then, Simon Mignolet was flat-footed as the flick that followed zoomed off his right hand and inside the post. Walters is an Evertonian. He celebrated like one.

Stoke’s problem was, as Klopp later identified, using Crouch and Walters meant lots of space for Liverpool to exploit behind them. Though Crouch’s value was soon felt at the other end, clearing off the line when it seemed as though Roberto Firmino had equalised, Liverpool’s leveler eventually came just as it began to feel as like Stoke had quelled any threat coming their way. Liverpool had Glen Johnson to thank for the opportunity presented to them. The former Liverpool right back’s reaction to Adam Lallana’s initial shot was neither a control nor a clearance and this allowed Lallana to sweep in his seventh goal of the season.

Hughes reflected that everything for Stoke unraveled from there. “We haven’t defended correctly, which is a shame because we came with a game plan which they struggled to deal with,” he said. 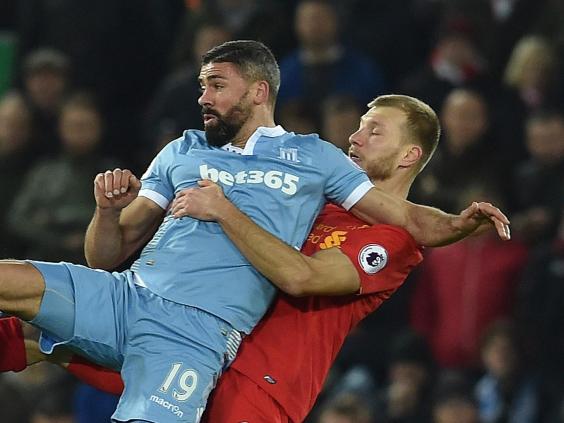 Jonathan Walters and Ragnar Klavan vie for the ball (Getty)

Suddenly, Liverpool possessed the confidence that makes them so dangerous. Had all of their chances been converted, the outcome would have been settled by half-time. Instead, it was 2-1; Liverpool’s lead coming when Johnson and Ryan Shawcross decided to retreat as Firmino prepared to release a shot which bounced off both posts before slithering across the line.

Liverpool’s victory was threatening to become a landslide. By the hour mark, it was 3-1. Though this goal was largely consequence of Jordan Henderson’s crisp pass to Divock Origi, Stoke again had themselves to blame to some extent. None of their four defenders had tracked Mané in-field sprint and that meant Giannelli Imbula had to chase him from a deep position. The Frenchman managed to reach Origi’s cross before Mané but in turn slid the ball into his own net.

Many of the critical questions about Liverpool’s title credentials relate to the depth of their squad. At the moment, Klopp can call upon Sturridge and Emre Can as substitutes. Sturridge had been on the pitch for less than 30 seconds when he made it 4-1 with his first touches, seizing upon Shawcross’s terrible backpass to round Lee Grant.

Klopp refused to comment on the prospect of Sturridge starting against Guardiola and City. “Our problems are becoming nicer ones, though” he concluded.