Their title defence may be misfiring but the fairytale Premier League champions continue to justify their status in the Champions League. After five of their six group matches, they are through to the knock-out rounds as group winners.

It was not quite as comfortable as they might have hoped after sweeping to a two-goal lead inside half an hour after a bright and confident start against the team they had beaten 3-0 in Belgium in September.

Brugge rallied after time and Jose Izquierdo’s goal gave Michel Preud’homme’s team a chance to wrestle back the advantage that Shinji Okazaki and Riyad Mahrez had given Claudio Ranieri’s side. 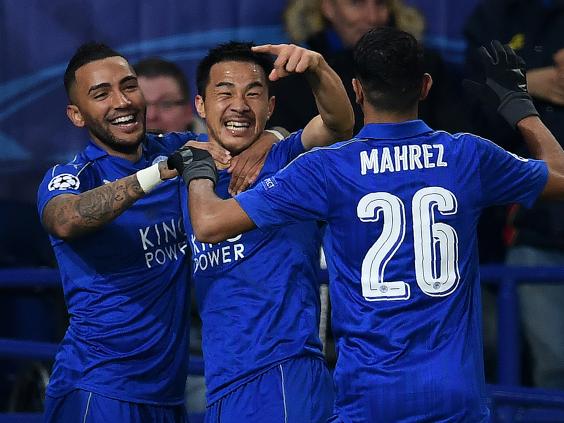 But Leicester worked hard and with discipline to protect what they had and with Porto held in Copenhagen their 13 point is enough to ensure they top Group G regardless of what happens when they travel to Porto on 7 December.

The evening could hardly have started any better for Leicester, for whom the inclusion of Andy King for Daniel Amartey was the only change from the side beaten at Watford in the Premier League last Saturday. 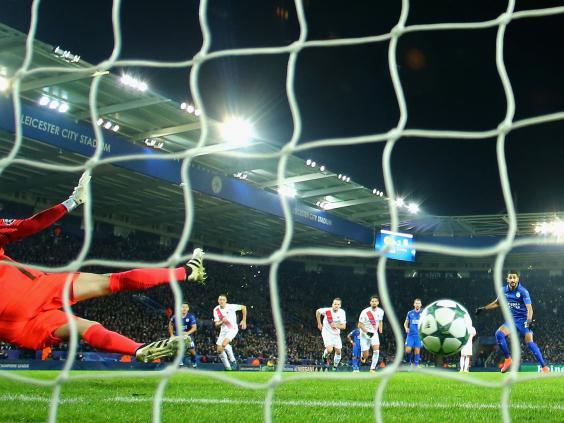 They were in front inside five minutes after their first meaningful attack, a classic Leicester goal from a move that began deep in their own half.

Marc Albrighton, who had scored an identically timed goal to launch Leicester’s campaign in Belgium in September, swept a pass upfield in search of Jamie Vardy, who had left back Christian Fuchs running with him to pick up a sublime flick from his teammate. Fuchs drove forward along the left before releasing a cross that perfectly bypassed three defenders before Shinji Okasaki met it at the near post and hooked the ball past goalkeeper Ludovic Butelle.

The stadium was suddenly an explosion of noise, which can have done little for the confidence of the Brugge players, who were still looking for their first point in the Champions League despite performing well domestically. Where Leicester have worries on that score, Brugge arrived here in fourth place in the Belgian First Division after winning six of their last nine matches. 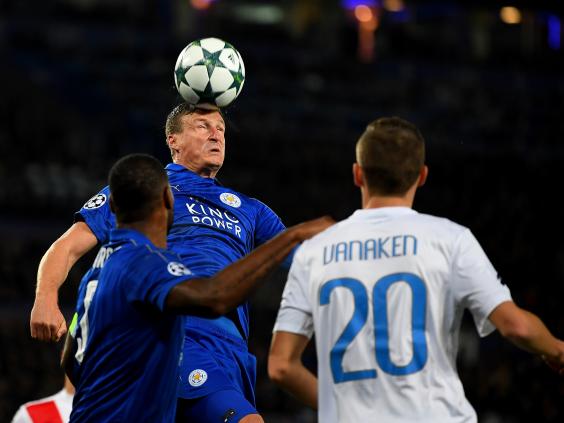 Huth jumps for a header at the King Power Stadium (Getty)

Their chances of gaining anything here receded further when Leicester’s lead doubled in the 29th minute. The visitors had enjoyed some good possession, enough to suggest they might find a way to draw level, but then a trip by Dion Cools on Albrighton just inside the box on the left gave away a penalty, which Riyad Mahrez converted for his fourth goal in the group matches.

It was already shaping up to be Leicester’s best win at home in the competition, having beaten their other two group rivals with a single goal. With Kasper Schmeichel sidelined by the broken hand he sustained in Copenhagen two weeks ago, responsibility for carrying forward Leicester’s unblemished record of clean sheets rested with Ron-Robert Zieler, making his Champions League debut.

The German was not seriously tested until three minutes before half-time, when Jose Izquierdo found the space for a diagonal shot towards the right-hand corner. Zieler responded effectively enough, diving to his left to punch the ball away. 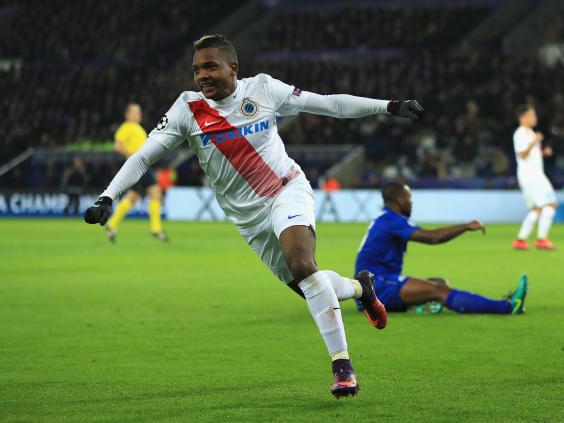 Iziquierdo pulled one back with a spectacular second-half effort (Getty)

He and his teammates must have felt comfortable with their night’s work as half-time arrived but that changed when the seventh minute of the second half brought the end of Leicester’s perfect goals against record as Jose Izquierdo suddenly fired Brugge back into the game with a stunning goal.

Breaking from the halfway line, the Colombian forward played a neat one-two with his strike partner, the former Middlesbrough and Burnley front man Jelle Vossen, before outpacing Fuchs with a scorching run down the right that he ended with a clean strike into the top right-hand corner to which Zieler had no answer.

Leicester now needed a third goal to ease any building apprehension. They thought they had it just inside the hour when Vardy backheeled a low cross from Fuchs past Butelle. It looked like the cheekiest of goals but the flag was up for offside, and correctly.