Even now, in the slow descent of his career, Cristiano Ronaldo has the power to bend games his way, to surprise and punish any opponent or observer who dared wonder if the old magic was starting to wear off.

In the first half of this Champions League quarter-final, Ronaldo was anonymous and his Real Madrid team were nowhere. They could not live with Bayern Munich, who went 1-0 up and should have had a second only for Arturo Vidal to put his penalty high into the stands. That was at the very end of the first half when it still felt like a big home win was on the cards.

But the second half was different. Ronaldo scored two clever poacher’s finishes, turning a 1-0 deficit into a 2-1 lead. He got Javi Martinez to foul him, then foul him again, a yellow card swiftly turning into red. Bayern collapsed, in a way that a team with this much experience should never do. Real seized control of the tie and now it is very hard to see them not being in the semi-finals.

Should it be a surprise? They are reigning European champions after all, having won the big one in 2014 as well. Yes, at half-time here it certainly felt like they would be heading out.

But the reality of this Real Madrid team is that they have always been about seizing the moment more than dominating games. That is how they beat Atletico Madrid in those two famous finals, and that is what they did to Bayern tonight.

It was a perfect example of a team realising that a match was still within their grasp. Bayern had begun the second half slowly, still cursing themselves for Vidal’s clumsy penalty. Real burst forwards, Dani Carvajal breaking down the right.

He darted a cross to Ronaldo, pulling back into space in the box. He swivelled and volleyed the ball into the bottom corner, a masterful finish, his 99th European goal. Not bad for a player who struggled to control the ball in the first half. 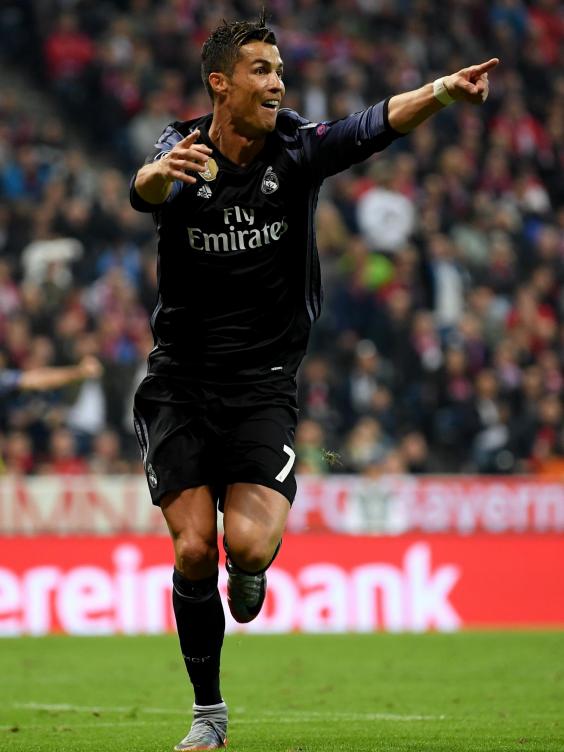 The momentum had switched, the crowd silenced, as Manuel Neuer tipped a Gareth Bale header over the bar. Real had the away goal and Bayern had the regret they had not made the most of their dominance.

What they needed most was cool heads and deep breaths. What they got was the opposite. Javi Martinez pulled Ronaldo back and was booked. Just two minutes later Martinez, who should know far better, clattered Ronaldo to the grass as he broke down the middle.

The only defence was that he had forgotten his earlier booking, but either way Martinez was off. 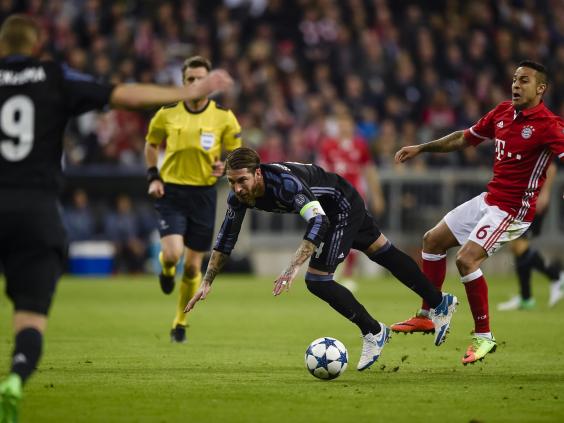 Thiago Alcantara had a fine game in midfield (Getty)

Bayern were in emotional and tactical tatters. Zinedine Zidane made what looked like a conservative change, withdrawing Gareth Bale, who was feeling a stiff hamstring, for Marco Asensio. But by going to 4-4-2 Real got the control to kill the game.

They started to churn out chances, enough to eventually to take a crucial lead. First Carvajal played in Benzema he should have done better than shoot at Neuer. Then Benzema had the ball on the left and found Ronaldo on the penalty spot, but Neuer stopped it with a crucial strong arm. 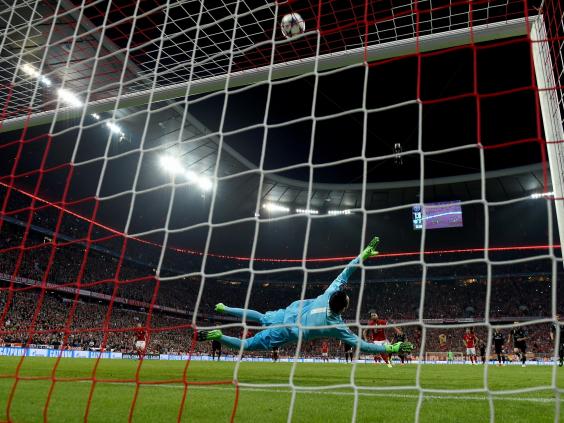 Vidal ballooned his penalty attempt over the bar (Getty)

Even Neuer could not hold off the inevitable forever. Asensio got the ball in space on the left and swung in a cross. Ronaldo met it in the middle and his shot squeezed through Neuer and in.

That was his second of the night and his 100th in Europe in his career, the first ever player to reach that remarkable milestone. More importantly, it was Real Madrid’s second away goal of the night, and it felt like a killer blow to Bayern.

It could have ended even worse for the hosts when, in second half added time, Sergio Ramos headed in a free-kick only for it to be disallowed. That surely would have been the end of the tie but even this, a 2-1 away lead, feels like an implausible mission for Bayern in the Bernabeu next week. 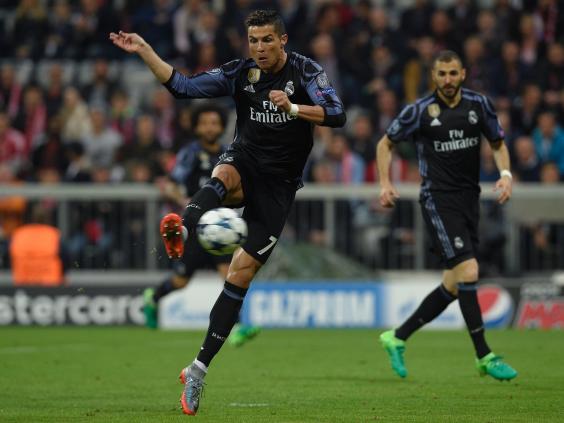 All of which is a surprise given how well Bayern played in the first half. Thiago Alcantara was easily the best player on the pitch, or at least, before Ronaldo decided otherwise. He ran the midfield, first to everything, stopping Real’s attacks and starting his own.

Even Luka Modric and Toni Kroos were outmanoeuvred in midfield and this did not look like a Real side that would eventually be winning 2-1.

Bayern had pinned Real back and they took the lead from a corner. Thiago took an out-swinger and it was met by the thumping run and header of Arturo Vidal, Bayern’s barrel of muscle in midfield. 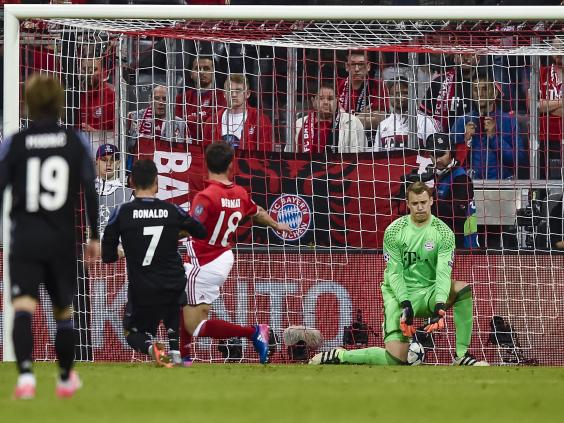 Vidal was everywhere and soon enough he had a chance to double Bayern’s lead. When Robben stood up a cross to the far post no-one saw Vidal’s run until it was too late, but his unstoppable header whistled just over the bar.

That was a good chance but even better was the penalty kick at the end of the first half, forced by waves of Bayern’s pressure. Ribery’s shot was blocked by Dani Carvajal’s arm and Nicola Rizzoli awarded a harsh penalty. Vidal stepped up but blazed it far over the bar, missing his moment to give Bayern a 2-0 lead their dominance deserved.

At the time it was not obvious that was the moment that Bayern lost the game and their chance of reaching the semi-finals. But Cristiano Ronaldo only needs the narrowest opening to take control, and if Bayern did not realise this, then whose fault is that?