A review into the 2m social distancing rule in England will conclude “within the coming days”, Culture Secretary Oliver Dowden has told the BBC.

It comes amid warnings many businesses will not survive under the current guidance as the government prepares to ease more restrictions on 4 July.

Pubs, restaurants and hotels are among those hoping to reopen.

Pubs could be patrolled and people could be encouraged to use apps to order drinks, according to The Times.

Whitehall sources said the government would update the country on the social distancing rules next week.

It comes as the coronavirus alert level was downgraded from four to three on Friday.

Prime Minister Boris Johnson commissioned the review on 14 June, saying there was “margin for manoeuvre” in the 2m social distancing rule as the number of coronavirus cases falls.

The other nations of the UK have not announced any plans to change the 2m distance. Scotland’s First Minister Nicola Sturgeon has said she is looking at the evidence, and Northern Ireland’s Economy Minister Diane Dodds has said she is open to changing it.

A coronavirus adviser to the Welsh government said the risk in reducing the distance “isn’t very big”.

The daily UK update provided by the government on Friday showed there were 173 coronavirus deaths recorded across the UK on 18 June, taking the total to 42,461.

Culture Secretary Oliver Dowden told BBC Radio 4’s Any Questions that the government’s review of the 2m rule will be “concluding shortly, within the coming days”.

His comments came as a raft of measures reported in The Times revealed how parts of the hospitality sector could look significantly different compared to pre-lockdown:

Kate Nicholls, CEO of UK Hospitality, told BBC Radio 4’s Today programme that the guidelines seen by the industry involve businesses carrying out their own risk assessments, rather than a one-size-fits-all approach for “everything from a burger van in a park to the Fat Duck in Bray”.

The government has been under pressure from industry leaders and its own MPs to relax the 2m rule, with widespread concerns around the impact it would have on the UK economy.

Ms Nicholls said a third of pubs and restaurants could not reopen with the 2m rule in place, although all hotels could. But reducing it to 1m meant rather than generating 30% of normal revenue and losing money, businesses could break even at 70% of normal revenue.

“Every day we have delay and uncertainty about that opening date, the industry is haemorrhaging cash and jobs and livelihoods are at risk,” Ms Nicholls said.

The UK government currently advises people to stay 2m (6ft 6in) apart from others to avoid spreading coronavirus.

The World Health Organization recommends a distance of at least 1m (just over 3ft), but the UK government’s scientific advisers say that being 1m apart carries up to 10 times the risk of being 2m apart.

Prof Calum Semple at the University of Liverpool, a member of the government’s Sage scientific advisory group, said he had changed his personal view on the need for social distancing because there were now “low levels, and sustained low levels, of transmission throughout the country”.

He said 2m was still safer than 1m, but it was “now a reasonable political decision to relax these rules” and to open businesses where the 2m rule is harder to maintain, as long as there are other precautions in place.

If the UK faces a second wave of infections, Prof Semple said it might consider imposing social distancing rules on a regional basis, with different requirements for London compared to Carlisle, for example.

Chancellor Rishi Sunak told the BBC earlier this month that he would like to see the rule relaxed if “safe and possible” to do so, adding that the review will take evidence from scientists as well as economists. 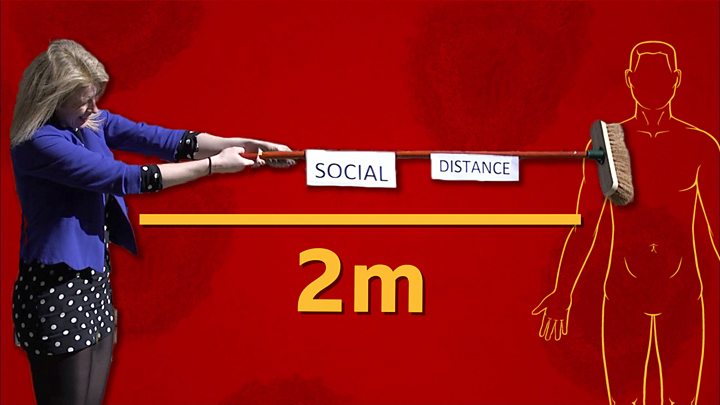 Some bars, restaurants and pubs say they will be unable to make a profit if the 2m guidance is still in place when they reopen.

Tourism firms have also warned of tens of thousands of job losses unless the distance is shortened.