The scoreline is not as big, but the challenge still feels so much greater. Barcelona are going to have to pull off another unlikely historic comeback at the Nou Camp to stay in the Champions League, after getting resoundingly beaten 3-0 by a Juventus team who feel like the competition’s future. You could say the excellent Paulo Dybala is football’s future, but he is already so brilliant in the present, having scored the two early goals that set the Italian champions on their way.

Juve were at that point so relentless and ruthless, before Giorgio Chiellini made it an emphatic 3-0, but there followed a fair few moments of fortune. Barca had still created and squandered more than enough chances to actually come back and claim the advantage in this first leg, and the match – that may well have seen one of the performances of the season from Juventus – still required maybe the save of the season and the tackle of the season.

Barcelona started almost as badly as in the last-16 first leg away to Paris Saint-Germain, and the real worry for them for was that Juventus scored within just seven minutes, but you could still say the goal was coming. The Italian champions had snapped into action so well, clearly suspecting a certain vulnerability in the Catalans.

Gonzalo Higuain should have scored a header after just two minutes and, although Marc-Andre ter Stegen held that, he almost lost the ball with his feet moments later when Mario Mandzukic pressed him. That was happening all over the pitch. Barca barely had time on the ball at that point, something that was certainly not the case when Juan Cuadrado picked it up on the right wing. He jinked inside to barely a challenge from Jeremy Mathieu, before picking out Dybala.

The Argentine revelation turned and finished supremely, but the wonder was how Barca could give a player of such reputation and talent so much space. Juve had clearly identified where the space was in Luis Enrique’s set-up, as they kept looking to go down the wing.

The one caveat was that Barcelona did look so much better going forward, and Leo Messi still managed to be one of the best players on the pitch in the first half. He was a key part in one of the best passages of play in the game, and one that could yet end up being seen as a decisive moment in this tie. On 21 minutes, Messi cut inside and slipped a glorious ball through for Andres Iniesta. The pass was so inviting, and delivered to player of such intricate technical quality, that it seemed certain they had an equaliser, only for Gigi Buffon to immediately get down and pull off an immensely impressive save. 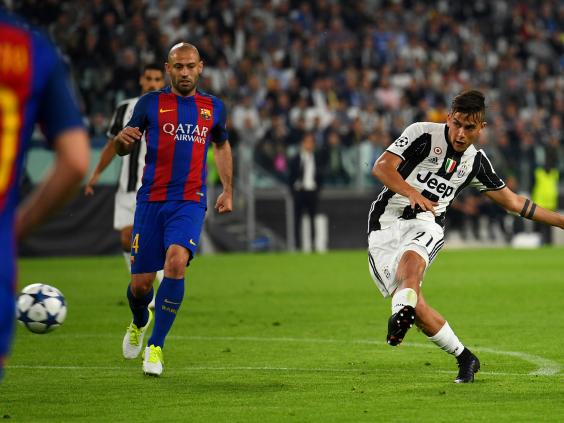 Juve then went straight up the other end and scored an immensely impressive goal. Again, they went down the wings and, again, Dybala was the scorer, but this was a much more difficult and brilliant effort as he curled the ball round a Barca defender to also beat ter Stegen. It was quite an announcement.

There was yet another moment of potentially huge either-or importance just minutes into the first half, when Suarez suddenly looked to get through on goal, only for Leo Bonucci to deny him with an improvised tackle that was probably the equal of Buffon’s save. Although he had somehow fairly clipped it back in sensational manner when the Uruguayan was about to break through, the ball wasn’t completely cleared, and only went as far as Messi. He tried to delicately roll it past Buffon, only for it to roll past the past. 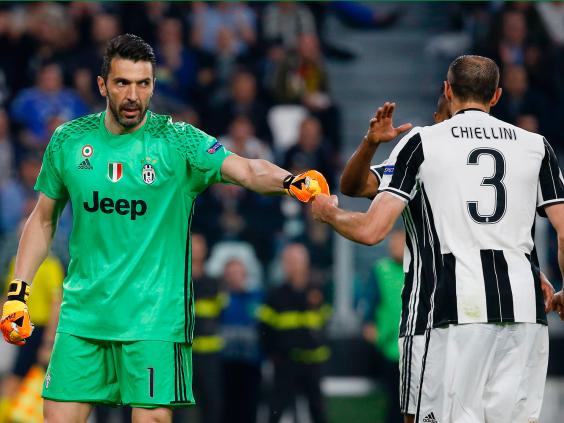 Suarez almost got in again minutes later but, as all this was happening, Juve were still as dangerous as ever. Sami Khedira curled over the bar from distance, and Higuain again only found the hands of ter Stegen.

Allegri’s side were just playing like one of those sides who now knew they were better, not to mention with the kind of confidence that comes from such a formidable home record in Serie A, and they soon had the extra goal to embolden them too. On 55 minutes, Chiellini scored the header from a set-piece to make it 3-0.

If the centre-half had made the score so emphatic, he still got very lucky on 68 minutes, when a Suarez shot so clearly hit his hand just inside Juve’s 18-yard box. The Barca number-nine had already squandered another big chance just before that. 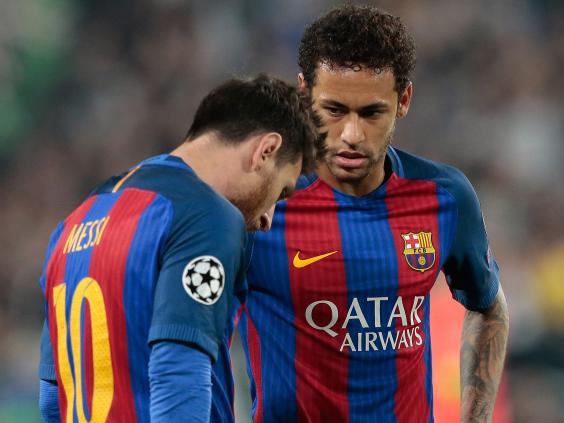 A week of introspection lies ahead for Barcelona (Getty)

It was the curious irony to this game, as well. Juventus were good value for their win and so much of what they did was deserving of a definitive scoreline given how devastating they had been, but Barcelona had still made and wasted so many chances.

While the Catalan players just couldn’t seem to get that crucial final touch in attack, Juve were just about getting it in defence. Chiellini so conspicuously punched the air having made one challenge, while Barca were putting hands to heads, as they endured misses like the ball going just inches over Samuel Umtiti’s head.

The gap between the sides, then, is so much greater. Maybe, this time, too great. Juventus look that good, a lot better than Paris Saint-Germain, and now looking so much better than Barca