New letters from some of India’s Muslims soldiers who fought in the First World War have been discovered by an academic at Birmingham City University.

The personal letters date to 1915 and reveal how Indian soldiers compared their experiences of England to their home nation.

Approximately 885,000 Muslims were recruited by the Allies, the majority of whom would have never visited Europe before.

One of the soldiers, named as A Ali, talks of his first experience of the London Underground and department stores.

“We visited a shop where 2000 men and women were working and everything can be bought. There is no need of asking as the price is written on everything,” Mr Ali wrote.

“Then we went in the train that goes under the earth, it was for us a strange and wonderful experience – they call it the underground train.” 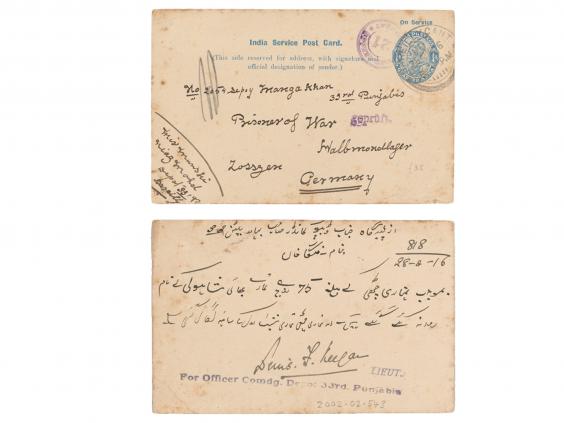 This postcard was sent to ‘LIEUT For Officer Commanding depot 33rd Punjabis’ by SepoyManga Khan, 33rd Punjabis, who was a prisoner of war at Halbmondlager in Zossen, Germany (British Muslim Heritage Centre/National Army Museum)

Mr Ali also reserved special praise for the police and the respect they demand.

“If one policeman raises his hand every single person in that direction rich and poor alike, stands still where he is as long as his hand is raised.”

Another letter, written by Abdul Said, compared butcher’s shops in Britain to those in India.

“Every shop in this country is so arranged that one is delighted to look at them. Whether you buy much or little it is properly wrapped up, and if you tell the shop man to send it to your house you have only to give him your address and he delivers it,” Mr Said wrote in 1915.

“The butcher’s shops in Hindustan are very dirty, but here they are so clean and tidy that there is absolutely no smell.”