The aircraft crashed in a field in Weston Hills, near Spalding

A US military aircraft has crashed in a field near houses and a school in Lincolnshire.

Witnesses saw the F-15D come down in a field off Broad Gate, Weston Hills, near Spalding at about 15:30 BST.

The pilot have ejected from the aircraft and police said he had escaped with very minor injuries.

The US Air Force said the jet was from the 48th Fighter Wing based at RAF Lakenheath in Suffolk and had crashed during a combat training exercise. 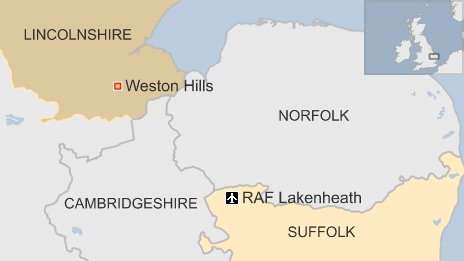 The aircraft was based at RAF Lakenheath in Suffolk

He added that it was unclear what had caused the crash.

An HH-60G Pave Hawk helicopter transported the pilot back safely to the base where he is being treated.

Witness Janet Prescott said: “It’s frightening to think that the jet has passed over houses and the village school. Who knows how that jet could have come down.

“From the point he ejected to where the plane came down is probably a mile. That jet has continued flying with no-one in it.

“It could have hit any one of a number of houses. Thank God it didn’t.”

Weston Hills Church of England Primary School was evacuated but a member of staff said everyone at the school was fine.

Shaun Gough, whose twin five-year-old daughters are pupils at the school, said part of the aircraft’s wing had landed in the field about 400yds (365m) away.

“It was coming down from the sky backwards like it was out of control in a spin,” said Mr Gough.

“There were two aircraft which had been circling around most the afternoon and there was a roar, then silence, which made us look across.” 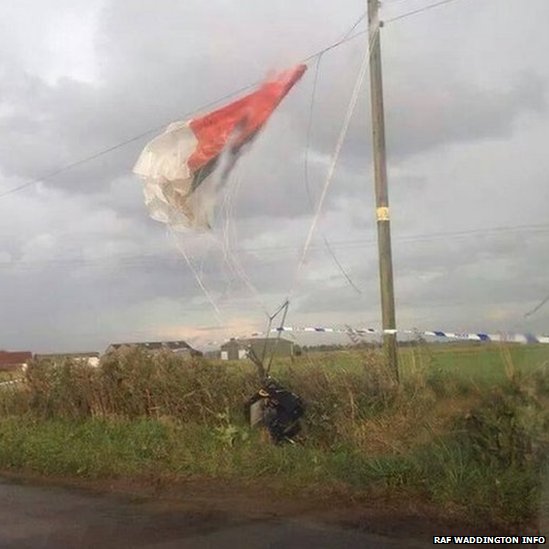 “I was watching when it came down back end first, and when you’re standing watching it come down close to your daughters’ school it’s pretty horrendous,” he said.

“When my wife went to the school to pick up my daughter she said the black smoke was blowing across the car park and into the school.

“I’ve seen a Sea King helicopter land and pick somebody up. I’m guessing it’s the pilot.”

Bernard White, who had earlier seen the plane go up in a “fireball”, said Weston Hills was now in “lockdown”.

He said police officers asked him to leave his house due to “acrid smoke” but he refused.

Mr White said he saw American military vehicles enter the village. A number of firefighters were at the scene but he said everything had since “quietened down”.

Lincolnshire Police advised people to avoid the area as fumes from the fire may be hazardous.

A statement said: “The plane has come down in an isolated rural area and no premises have been affected.

“The plane belongs to the US Air Force based at RAF Lakenheath and the pilot has escaped with only very minor injury.”

Bernard White, who was working at home in Weston Hills, said he heard “a scream” overhead.

“The aircraft seemed low and then it went ‘woof’ like a big thump,” he said.

“I looked out the kitchen window and it was down. I saw a parachute in the distance. [The aircraft] was a fireball but now looks incredibly intact.”

The US Air Force said the plane crashed at 15:28 while conducting a combat training mission.

A statement said: “One person was on board the aircraft at the time and ejected safely.

“A board of qualified officers will investigate the accident.” 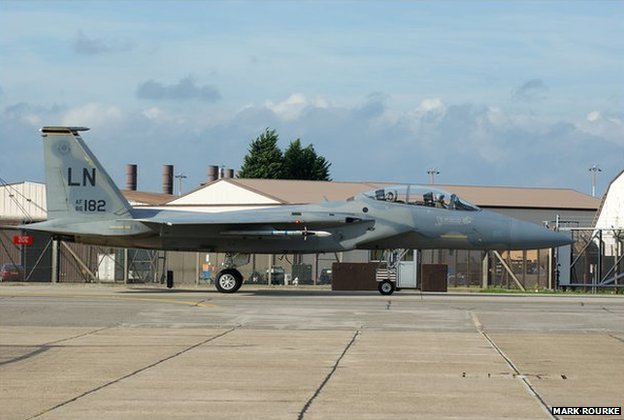 The aircraft was a two-seater plane from RAF Lakenheath, like the one above. 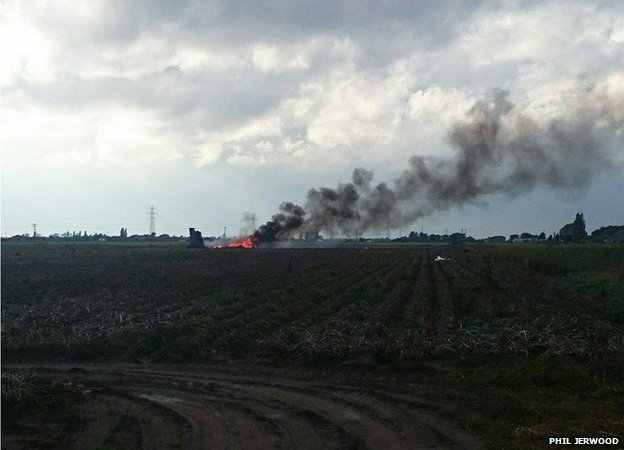 The US Air Force said the aircraft was conducting a combat training mission.