“Men used to get so crazy in the darkness they would play Russian roulette with loaded rifles,” says the barmaid, Anne, as she pours me another pint of strong, auburn pale ale – a heady tipple from Spitsbergen island’s own brewery. “Before the first commercial flights began coming here in the mid-1970s, the sea ice would freeze the boats in the bay, cutting us off from the rest of the world. No way in. No way out. Just an unrelenting night that would go on for more than 100 days.”

Little wonder, then, that the only permanently populated island in Svalbard – a far-flung archipelago that sits between Norway and the North Pole – should produce its own beer. By the end of October each year, the sun has cast its last rays upon these Arctic islands, heralding its fifth season – “dark winter”. For four months, the sun forgets this isolated frontier. By moonlight, the icy fjords and vast glaciers that surround the capital of Longyearbyen – population 2,144 – are illuminated by a bluish, ethereal glow. But during periods of snow and rain, the sky falls remorselessly black.

How does this ceaseless darkness affect the locals? I’d only been in Longyearbyen a few hours, but the lack of light had already started playing tricks with my body clock. It was just 4pm and I was on my fourth pint. I’m not a teetotaller by any stretch of the imagination, but heavy afternoon drinking, in an empty pub, in the Arctic? Anne sought to reassure me. “People here drink so much more in winter. The lack of sunlight makes it feel like the end of the day much earlier.”

I also found the alcohol had a much-needed warming effect. Temperatures here in winter hover between -25C and -30C, and the Arctic wind can cause frostbite on exposed skin within seconds. It came as no surprise that the majority of Svalbard’s 2,600 permanent residents spend so much time inside – just removing a glove to fumble with my phone resulted in agonising pain in my fingertips.

Perhaps unsurprisingly, the This is Svalbard study conducted each year by Statistics Norway has consistently found that more alcohol is consumed per person on Svalbard than in any other region of the country. And it turns out a culture of heavy drinking goes all the way back to the archipelago’s coal mining industry in the early 1900s. “The mines were grim and dangerous places where death and serious injury were common,” my guide, Jim, told me as we explored the now decommissioned Coal Mine 3, deep below Svalbard’s Arctic surface. “Heavy drinking became part of the Wild West-like culture that once existed here – especially during dark winter.” 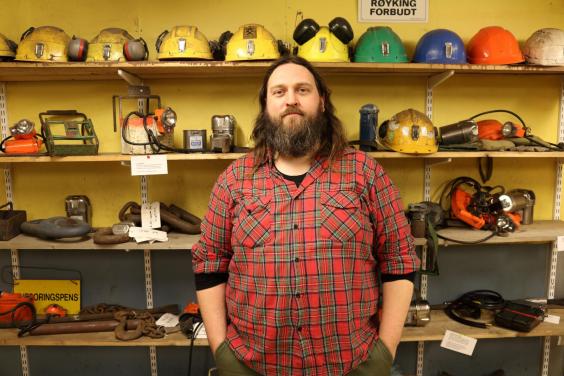 Coal mine guide Jim at decommissioned Coal Mine 3 (George Godson)

Coal Mine 3 is an eerie vestige of Svalbard’s once thriving coal industry, which has been in steady decline for more than a decade. It’s no longer profitable to run several mines spread across the archipelago, so Coal Mine 3 is surplus to requirements. Left almost exactly as it was on its final working day back in 1995, it now resembles a horror film set: a series of deserted mines and offices, spookily devoid of human beings. Helmets, lamps and overalls hang neatly outside the common room while sledgehammers, pickaxes and gloves remain ordered in the cubbyholes of the mine’s once all-male staff. “It was dark above and below ground for months,” Jim told me. “This place could turn any man to drink.”

To this day, there are no taxes levied upon alcohol in Svalbard, because the Spitsbergen Treaty, signed in 1920, said the archipelago should be free of Norwegian duties. I’ve nursed £14.50 pints of beer in Oslo, Bergen and Trondheim in the past, but on Svalbard the alcohol remains staggeringly cheap in comparison. Large cans of beer are priced from just £1.45 and harsh blended whiskies can be snapped up for as little as £5.80 per litre.

But in the same way that thirsty miners were restricted by their employers, today’s residents remain limited to a monthly quota of either 24 beers or two litres of hard liquor. These days locals need to present a special alcohol card at point of purchase, while tourists need to hand over their boarding pass.

Oddly, wine remains outside of this quota – meaning you’re free to buy as much as you wish. In the liquor store, especially, one can buy decent bottles of Argentine shiraz for just £4.30. “We’re much busier during the dark months,” the shopkeeper told me as I smirked at the cost of the booze around me. “People slow down and stay home at this time of year, whereas in the summer it’s 24-hour sunlight and there’s much more to do.” 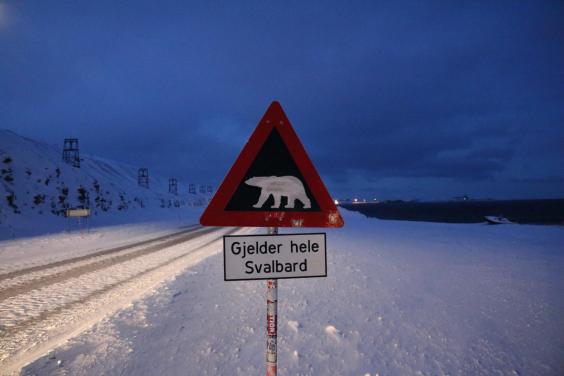 Anyone can live on Svalbard providing they look after themselves – there’s no social welfare system here. And while the hospital is good at dealing with broken limbs and frostbite, there’s no maternity unit because there are too few people to justify one; pregnant women travel to the mainland two to three weeks before their due date. Dying is an even bigger problem – the permafrost prevents buried bodies from decomposing. Those who happen to die on Svalbard are sent to the mainland where they can be buried, or else cremated and then scattered on the island. A sense of adventure is certainly a prerequisite for people wishing to settle here.

But migrants are tempted by the 8 per cent income tax, in contrast to upwards of 25 per cent on the mainland. While most residents are Norwegian, there’s a population of around 40 Filipinos, a handful of Brits, and a 120-strong cohort of Thais – lured in by the higher wages.

“How could you live here during dark winter?” I asked a (sober) taxi driver from tropical Phuket, on a short ride between two pubs (it was far too cold to face the walk). “I quickly got over the darkness, because the money is so good,” she replied. “I came here for a few years, then I’ll leave.”

And while “island fever” is accentuated during the dark months, I didn’t encounter anyone who took their dark-wintertime drinking too far. Everyone has to pay their own way on Svalbard – so people may drink more, but rarely to an extent where they can’t get up and go to work. It all seemed like a slightly tipsy utopia, where the Danish concept of hygge had taken on a pleasantly sozzled, Arctic flavour. 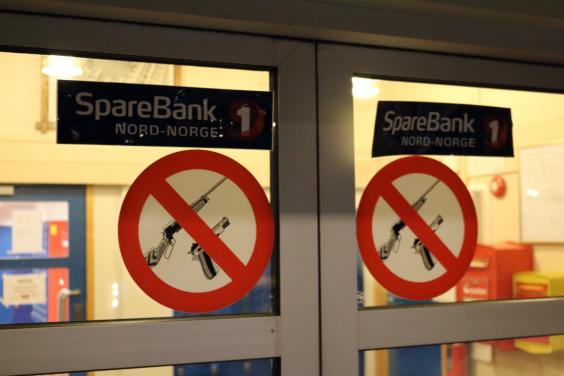 Longyearbyen might be the archipelago’s largest settlement, but really it’s just a handful of snowy avenues glowing under 24-hour, tangerine streetlights. One low-rise high street is home to a handful of pubs, cafés and souvenir shops.

Architecturally, it reminded me of northern Norway; wooden cabins with steep triangular rooftops designed for dealing with heavy snowfall. On brisk, sobering jaunts between bars, I could see vitamin D “happy lamps” glowing from within cosy living rooms, as the hum from snowmobiles echoed through the ice-covered Longyear Valley. (There are said to be 4,000 snowmobiles on Svalbard, as none of the settlements here are connected by road.) 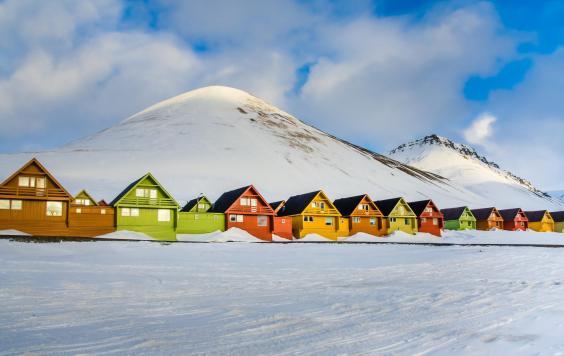 Houses in Longyearbyen, the capital of Svalbard (Shutterstock)

Occasionally, if I looked away from the town’s manmade glow, a few wisps of greenish aurora spiralled up from behind the neighbouring Adventfjorden bay like a silent, cosmic volcano. For the locals, the Northern Lights come and go mostly unnoticed, but for tourists they are a big deal. Congregations of gloved photographers can be found on the fringes of town, fiddling endlessly with exposure durations and F-stops. Most visitors to Svalbard come between March and September, however, for 24-hour sunlight and polar bear sightings; despite its remoteness, the archipelago received 130,000 leisure tourists in 2015.

One popular tourist activity is, inevitably, dog sledding. I met Peder, a former Norwegian soldier, as he tended to his 200 yapping huskies, used for excursions. His eyelashes heavy with pearls of ice, a rifle slung across his back in case of an encounter with a hungry polar bear, and his tough hands exposed to the -27C cold, he cut a hardy figure. “If I don’t keep a strict routine of going to the gym, getting up for work and eating at normal times the darkness can make me sleep for 15 hours,” he told me. “On an average drive to the supermarket I often end up rescuing a car from a snowdrift.” 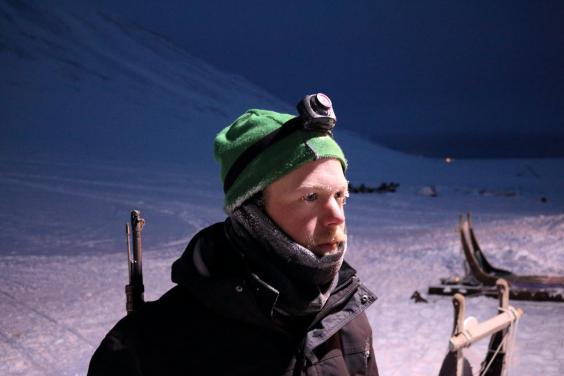 The idea of migrating to Svalbard appealed to my lust for isolated places – but there’s no way I could handle the darkness for longer than a week. I quickly found myself daydreaming of sunny days and bright, natural colours. I said this to Peder, but he was having none of it.

“Dark winter is an adventure. Everything becomes more exciting and people party more,” he told me.

“And what do you do tonight?” I asked. “Tonight?” he replied. “Tonight we go to the pub, of course!”