An enervating young side packed with energy, ideas and players ready to bring something new to the Champions League. This was the script which seemed to have been written for Tottenham Hotspur when they finally won their battle to the reach the continent’s high table last Spring, though it was the one that Monaco wrote, on a night which brutally ended the adventure of Mauricio Pochettino’s charges.

Though the pat answer after an elimination such as Tottenham’s – whose tournament never got  better than a win at CSKA Moscow and who were even outplayed when they drew at Bayer Leverkusen – is that it takes time to learn the Champions League ropes. Leonardo Jardim’s newly assembled side utterly deconstructed that notion. ‘Monaco veut enflammer l’Europe’ (‘Monaco want to light up Europe’), Le Figaro had written of them on Tuesday morning and that’s what their players showed. The Champions League seemed to ignite them.

The same could not be said of Spurs, who were were technically second best and sent out with a game plan which was, frankly, naive. Their high attacking line and wing backs exposed them to the thrust of a side who have scored 39 goals in 13 domestic games. Pochettino’s talk of this being Tottenham’s last stand came to nothing. No Tottenham player stood out. 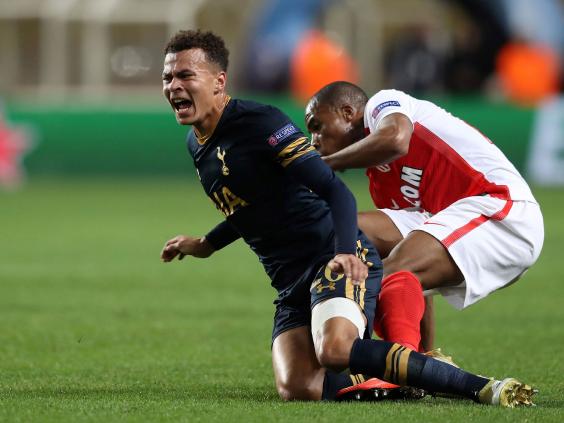 By early evening the Riviera bars were full of Tottenham fans, looking for a sign from Bayer Leverkusen’s early game in Moscow that this night would not extinguish their Champions League adventure. The Germans’ draw – with the Russians spared late on by their own crossbar – built some belief.  It would not be win or bust for Tottenham, as Mauricio Pochettino had feared beforehand.

It would have removed some of the pressure immediately had Son Heung-Min seized a gilt-edged opportunity delivered when Dele Alli bisected the centre backs with a pass which sent the South Korean bearing down on Daniel Subasic, the Monaco goalkeeper. He dithered, though, and was forced right where he lost control, a mere seven minutes in.

The verve and sometimes breathless intuition of the Monaco attacking play compounded the gravity of the miss. Pochettino had taken some eye-catching selection gambles with a defence which, with Kieran Trippier and Kevin Wimmer chosen ahead of substitutes Kyle Walker and Jan Vertonghen, was vulnerable in the face of the French side’s brim. 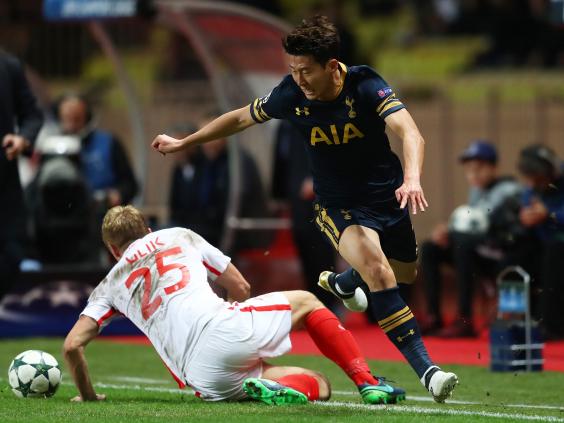 Son looks to take the ball past Kamil Glik (Getty)

By half time Monaco had rained 11 shots on Hugo Lloris’ goal, while Tottenham had not mustered a solitary one and Radamel Falcao’s 11th minute penalty miss didn’t seem hugely consequential. “El Tigre”, as they call the resurgent Colombian in these parts, reverted to his Manchester United mode with his poor right foot kick, which Lloris saved comfortable to his right.  (It was a wild and tired kick at Fabinho by Eric Dier which had conceded the spot kick.)

But Monaco then seized on the space left behind by the Spurs full-backs whose advance equipped the team with a mere three-man rearguard and looked suicidally risky. Full back Benjamin Mendy, down the Spurs right, has been one of the many shrewd summer buys (from Marseille) who have transformed this team and he damaged Spurs in a way which suggested he is one to watch. The forward Valere Germain offered more of the same, puncturing Pochettino’s high defensive line and firing the best of two good chances a few inches wide.

Spurs struggled to find any kind of accuracy as they sought to build out of defence. Mousa Demebele was a key shield but the distribution was wayward.

The goals which seemed inevitable arrived fast and furious in a five-minute period on which the game hinged and which displayed once again the French side’s threat from the wide areas.

Mendy turned Harry Winks inside out on the left and despatched a cross which Djibril Sidibe headed home from a central position. 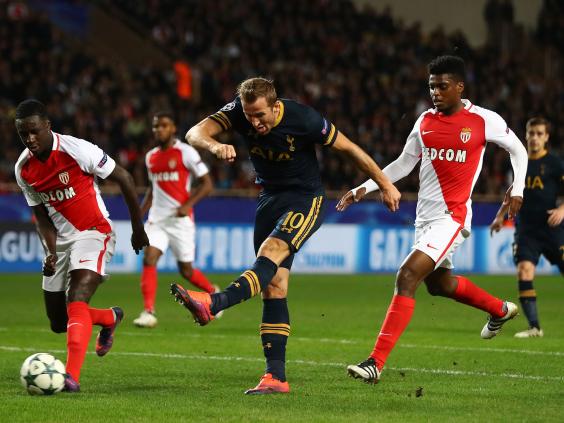 Tottenham responded immediately, when a good ball into the area from Trippier found Alli, whose arm was grabbed by Kamil Glik in the area. Harry Kane despatched the penalty right footed to Subasic’s right. But the reprieve was desperately temporary. Monaco attacked down their own right flank, from where Djibril Sidibe’s cross on the overlap reached Thomas Lemar, whose first-time finish from an acute angle was so powerful that Lloris had barely moved when it flew past him.

Of necessity, Pochettino threw on Vincent Janssen and Christian Eriksen to bring some attacking thrust and Eriksen curled a shot that was blocked away. But it was Monaco who drived at Tottenham, again and again, bringing a monumental performance from Lloris to keep his side’s evaporating hopes alive. He leapt into an extraordinary reflex save from the Polish defender Kamil Glik’s point blank header, then smartly blocked Falcao’s shot, when he broke the defensive line.

He winked at Glik after the first of the saves. A sobering night and tournament.