Scoring freely, conceding nothing, Chelsea’s perfect storm of form rolls on. Antonio Conte’s emerging team have now won six in a row and sit top of the Premier League as they prepare to face Tottenham at home and Manchester City away in the next two games.

It was 1-0 here, but it is 17-0 over the past six league matches. It is now ten league goals for Diego Costa, while it is approaching ten hours since someone scored past Thibaut Courtois.

The last player to do so was Arsenal’s Mesut Özil, who made it 3-0 before half-time a week after Liverpool had won at Stamford Bridge. But that was in September. It feels a long time ago.

In the second half of that Arsenal match, Conte switched his side to 3-4-3 and Courtois has not been beaten since.

Against a determined, if offensively limited Middlesbrough, it was 78 minutes before Courtois was forced into serious activity. He fell to his left to parry an improvised volley from Alvaro Negredo, who was otherwise isolated and ineffective.

Boro puffed a bit at other moments – Adama Traore and Gaston Ramirez firing over when well-placed – but Chelsea came through relatively untroubled.

Four minutes before half-time, Costa gave them the points with a sharp volley, a predator’s goal. This was the third consecutive game he has scored and, tellingly, Costa is scoring away from home – at Watford (the winner), Swansea (equaliser), Hull, Southampton and now Middlesbrough (winner).

No wonder Conte is calling Costa “one of the best strikers in the world” and “our reference point”. The Italian is also delighted that the Brazilian-Spaniard’s behaviour has improved. Costa has not been booked in this six-game run.

So there were reasons for Conte to smile afterwards, and he did, not least when asked if he could have foreseen this run when trailing 3-0 at Arsenal.

“It wasn’t simple to believe,” Conte said, “after two defeats against Liverpool and Arsenal, that we’d win six in a row and without conceding any goals. Chelsea weren’t favourites to fight then, so it’s difficult now to completely change opinion.”

He then continued to talk his way out of questions about title challenges, but he knows his team is thriving.

Chelsea have played better than they did here, and a 1-0 lead is always vulnerable. But then Victor Valdes in the Boro goal has settled in on Teesside and provided a barrier to repel Eden Hazard, Victor Moses and Pedro.

Had Valdes not also thwarted Marcos Alonso 22 seconds into the second half, then it could have been a much more convincing victory in terms of goals. 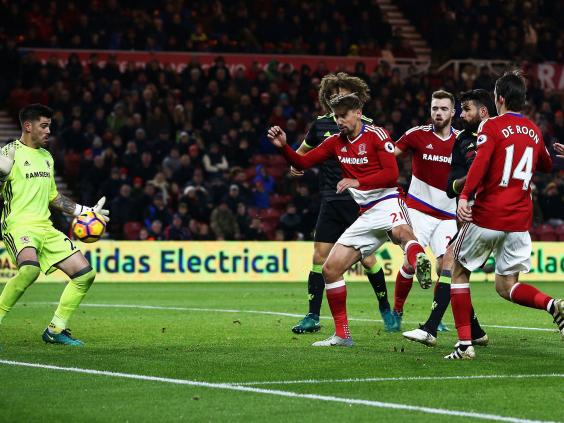 Valdes parried Alonso’s low drive and Calum Chambers nipped in to clear before Pedro could slide in the rebound.

Boro could not have recovered from a second then. Ultimately, they could not cope with Costa’s strike just five minutes earlier.

It stemmed from a disputed Hazard corner. Alonso jumped with a clutch of red shirts and in the crush, the ball hit Chambers’ back. Spiralling into space and dropping, all stood and watched apart from Costa. He was on the move and smacked a tasty six-yard volley beyond the hesitating Valdes. 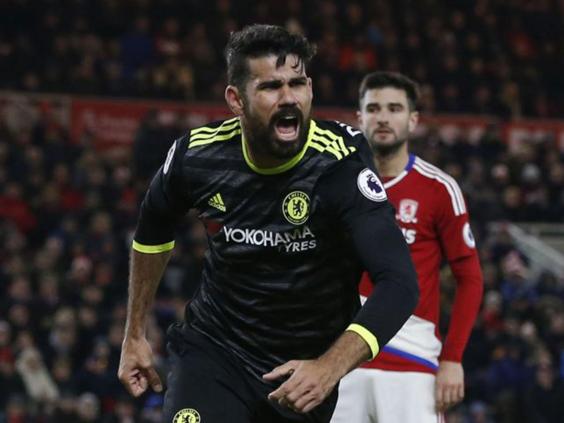 Costa celebrates after putting Chelsea ahead shortly before half-time (Reuters)

Boro were winded. Had Aitor Karanka’s team got to half-time at 0-0 they would have felt very much involved. Conte praised Boro’s defensive organization and frequently the home side had ten men behind the ball. Their aim was clearly to stay competitive as long as possible.

Yet Hazard and Moses made headway down the flanks nevertheless as Chelsea probed and probed, and in the second half, as the game expanded, further chances came. From one delightful and unselfish headed Costa knockdown on 63 minutes, Pedro crunched a volley against the crossbar with Valdes beaten. 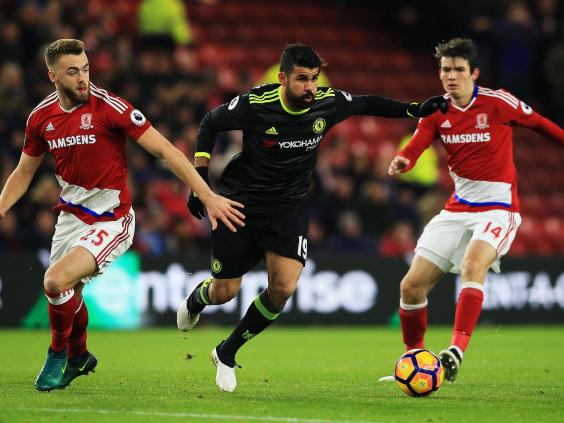 Middlesbrough tried to engineer some forward thrust but as Conte was to say: “In this period, it is difficult to play against Chelsea.”

“This period” now extends to Spurs at Stamford Bridge on Saturday. It could well be a defining period for Chelsea.