Arsenal head into next Monday’s Champions League round of 16 draw with no regrets after Lucas Perez’s hat-trick secured a superb win in Basle to see Arsene Wenger’s side finish as surprise winners of Group A.

Wenger gave his side just a 10 per-cent chance of advancing top of the group but that is exactly what happened as rivals Paris St Germain only drew at home to Ludogorets to open the door for the Gunners – and they forced their way through it with an emphatic 4-1 win in freezing conditions.

Arsenal went into the final matchday almost certain of advancing to the round of 16 as runners-up for the fourth straight season – knowing even victory in Switzerland would not be enough if PSG picked up an expected win.

But Wenger’s men duly delivered a hammering 4-1 win courtesy of Perez’s hat-trick and an Alex Iwobi effort, with Basle surrendering tamely and only striking a late consolation through Seydou Doumbia.

And remarkably, Ludogorets pulled off a surprise result some 250 miles away in Paris, meaning Arsenal go into Monday’s draw as winners.

Although they could still land the likes of Bayern Munich or Real Madrid, at least Wenger knows he did all he could to avoid the big boys and looks to progress into the quarter-finals for the first time since 2010.

The Frenchman brought a strong squad and played the likes of Mesut Ozil and Alexis Sanchez in clash at a bitterly cold St.Jakob-Park.

Arsenal set about their task early on and it was Sanchez who crafted the opening goal for Perez, lofting a perfect pass to Kieran Gibbs, who squared for the Spaniard to tuck home his maiden Champions League strike.

His second followed eight minutes later, this time Ozil playing in Gibbs and Perez stuck away his second, again from point-blank range, after the England full-back’s drive was pushed out by Tomas Vaclik. 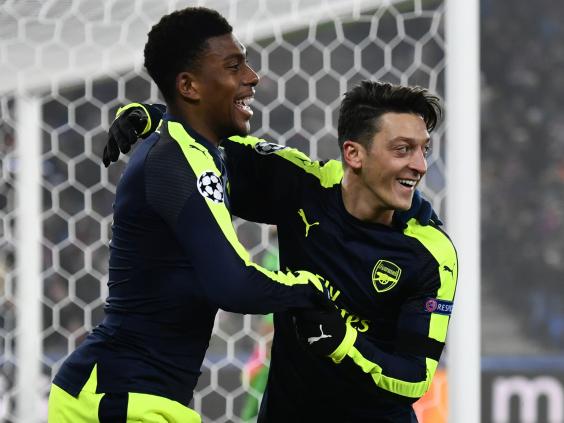 Basle skipper Matias Delgado headed over when well-placed but it was Arsenal who went in two goals to the good, with the news from Paris no doubt filtering through the away dressing room.

And they wrapped up their three points just two minutes after the restart as Gibbs’ heavy pass was missed by Sanchez but collected by Perez, who slotted home to round off his first Arsenal hat-trick.

The fourth came from another flowing move but this time it was Ozil who resumed his usual position of providing the assist, breaking in behind and squaring for Iwobi to finish from close range. 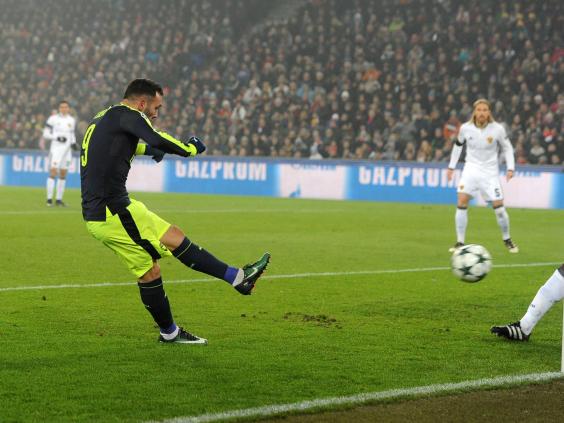 Perez finishes from close range for his second (Getty)

Wenger would have been nervous when Sanchez was fouled and went down in a heap, but the Chilean picked himself up to rattle the crossbar with the resulting free-kick.

Sanchez was replaced by Mohamed Elneny moments later, while Theo Walcott would be introduced in place of Ozil with a little over 15 minutes remaining. 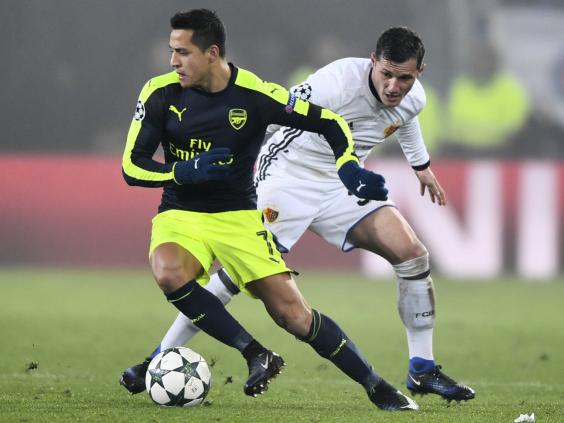 Substitute Doumbia pulled one back for the hosts with a clinical finish, but Basle ended the night bottom of the group and miss out on Europa League qualification to Ludogorets.

For Arsenal, they advance with an unbeaten record from their six games and will be hoping the draw is kind to them when it takes place here in Switzerland next week.