Andres Iniesta was in tears as he announced he was leaving Barcelona after 22 years. He also confirmed he would not be moving to any other club in Europe.

‘We arrived 25 years ago in our family car,’ he said of his trip to Barcelona’s La Masia youth academy with his parents and grandparents for a trial at the club.

‘Now they are here with me as I say goodbye. That journey was emotional but it was also terrible because then I ended up here on my own and I was only 12 years old! But evidently it was worth it.’ 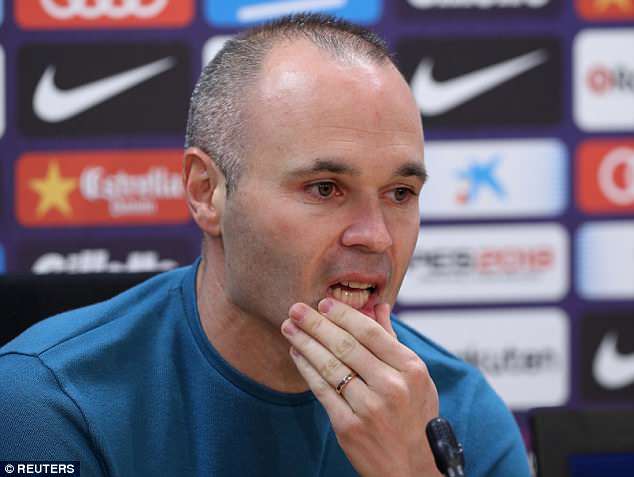 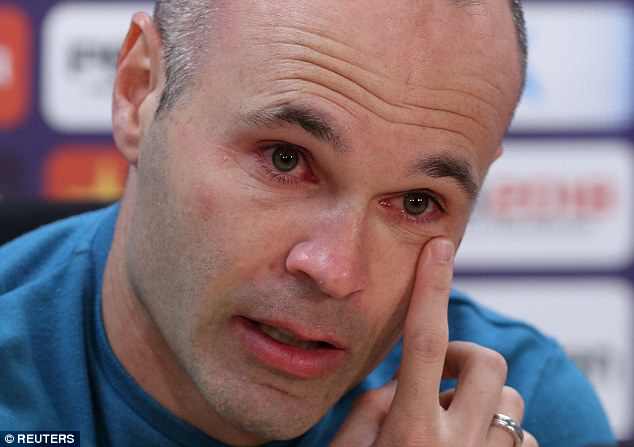 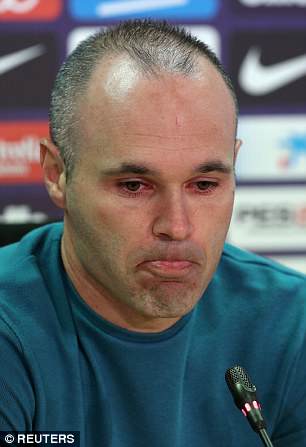 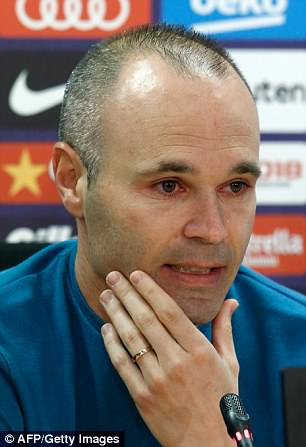 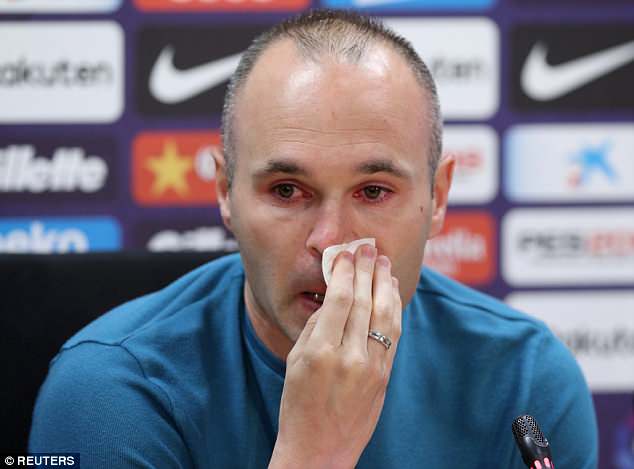 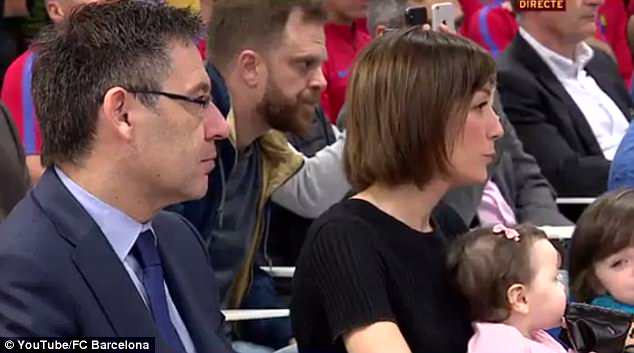 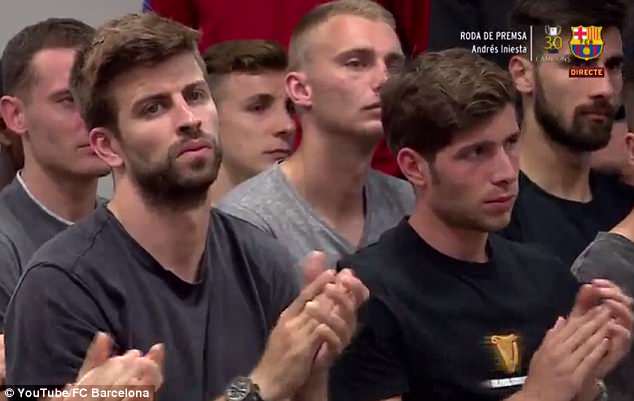 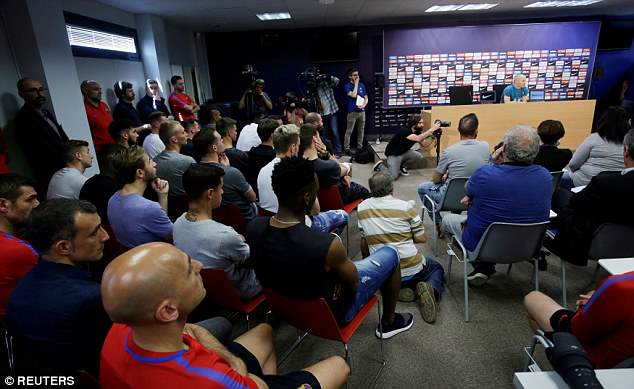 Emotional Andres Iniesta will leave Barca at end of season

Senior debut: October 29, 2002 vs Club Bruges in the Champions League

There were tears as he thanked his team-mates who packed the press room to watch him say goodbye. Only Lionel Messi and Luis Suarez of the first team regulars were absent. It was when he mentioned his team-mates that the tears first began to well up in his eyes.

There was no confirmation of his move to China at the end of the season but he did confirm that he would not be opting for a Premier League swansong despite interest from Manchester City and his former manager Pep Guardiola.

He said: ‘All the options that are not in Europe are possible. But in Europe, no, because I have always said that I will not play against Barcelona.’

Iniesta was asked about France Football’s recent admission that they probably owed him a Ballon d’Or. He made it clear the ball on the pitch was all that mattered to him.

He said: ‘There was no apology necessary. Everyone likes personal prizes but it was never that important for me.

‘I learned, when I first arrived here, that there is a ball and it is very important to take care of it.’

Asked about Barcelona’s future without him, he said he believed they could continue winning. And joked that he would return in three years to play again. 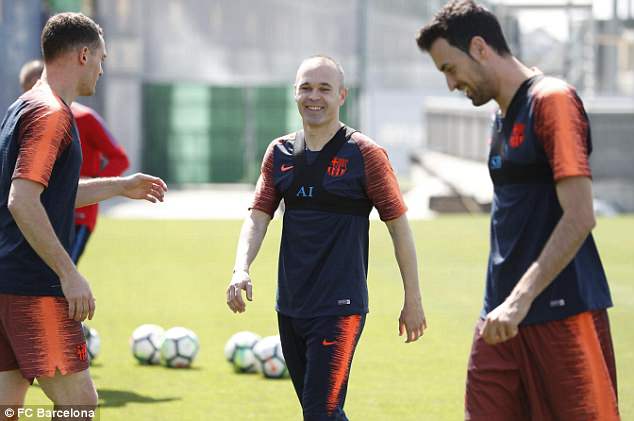 Iniesta smiles during training on Friday morning, shortly before his press conference 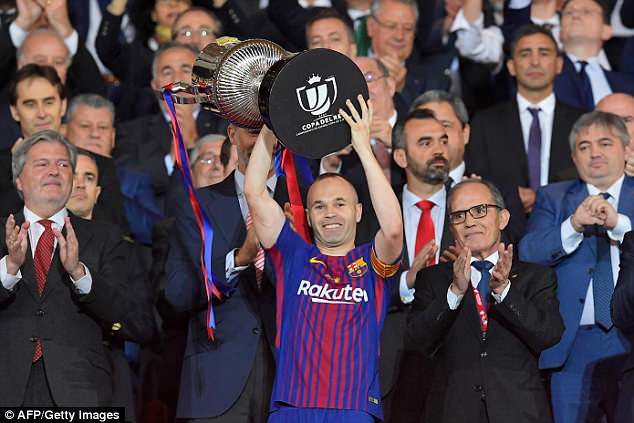 Iniesta’s press conference was watched by his team-mates on Friday, but Lionel Messi and Luis Suarez were both missing.

The Argentine has a history of avoiding emotional public goodbyes, having famously skipped Pep Guardiola’s back in April, 2012.

Iniesta’s press conference was arranged at short notice and Sportsmail understands Messi and Suarez were busy attending a function together on Friday.

That may have been a relief for Messi, who is likely to have become emotional over the departure of his long-time friend and team-mate.

The pair have spent 15 years together at Barcelona and are the club’s joint-most decorated players of all time.

‘I’m going for three years and then I’ll come back and play again,’ he said. ‘No I’m only joking but I could return to transmit all that I have learned through the years.’

He has been putting those lessons into practice for over a decade in the Barcelona first team.

He was a decisive substitute for Frank Rijkaard’s team when they beat Arsenal in the Champions League final in Paris in 2006. But when Pep Guardiola replaced the Dutchman he made Iniesta and Xavi the tick and tock of his brilliant clockwork midfield.

Iniesta played a huge part in the victory over Manchester United in the 2009 Champions League final despite playing under orders from club doctors not to shoot because of a thigh injury.

He was key again two years later when they beat United once more, this time at Wembley.

He was still in the first team under Luis Enrique when Barcelona won the Champions League against Juventus in Berlin in 2015.

‘I have learned from all my coaches they have made me a better person and player, ‘ he said when asked by Sportsmail about their influence.

It was typical Iniesta not to pick out any one of his former managers although he did say his debut against Club Bruges – given to him by Louis van Gaal – was his most significant match. 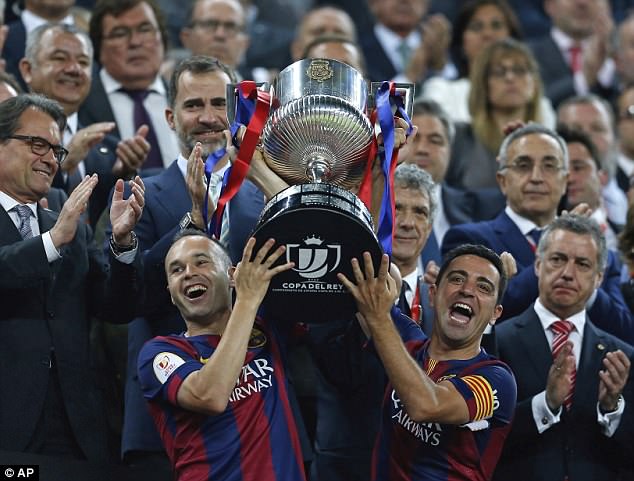 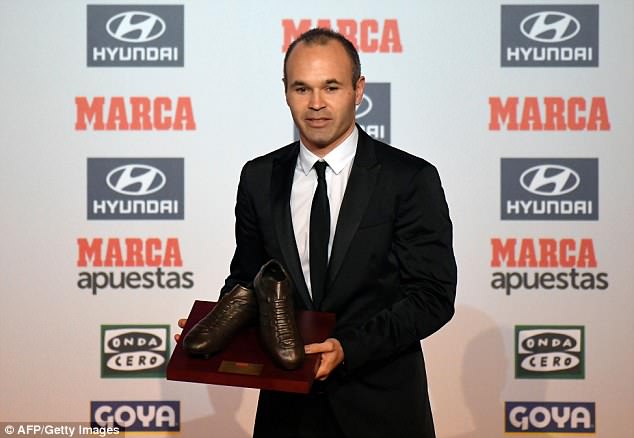 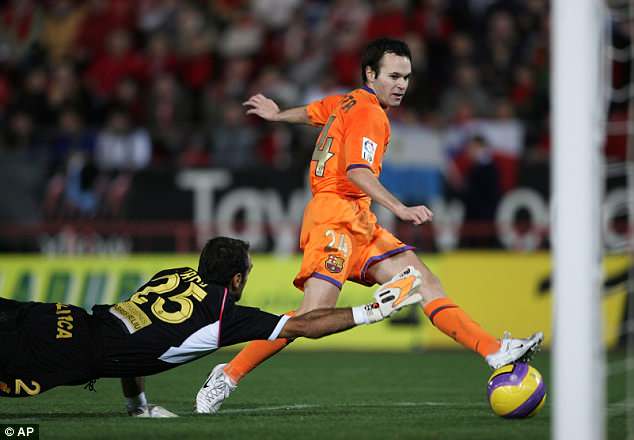 He scored 57 goals in 669 appearances for Barcelona, including this one at Mallorca in 2006 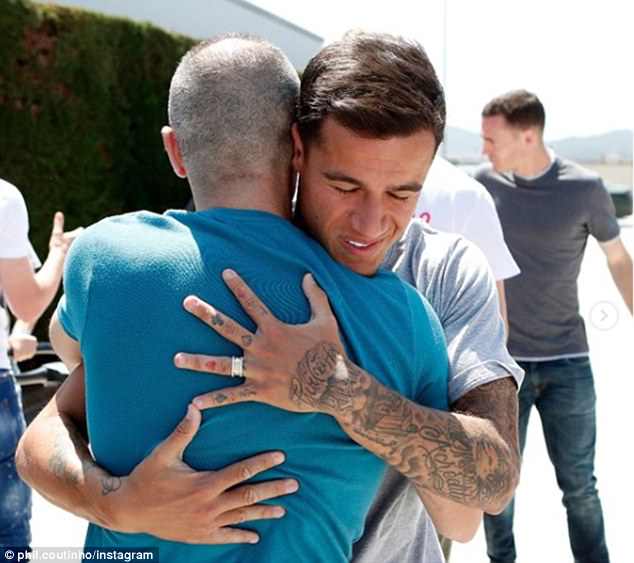 ‘We need a point to win the league and then, God willing, I’m off to the world Cup,’ he said looking forward.

Messi was not present at the event. It’s not the first time he has steered away from emotional public goodbyes.

Asked about his team-mate, Iniesta said: ‘It has been an honour to share all these years with Messi.

‘There is no one like him. He is a fundamental part of the team’s success. He’s unique and it has been magic to play alongside him.’

Asked if the decision was difficult, he said: ‘After 25 years here I know what it’s like what this club means. It is the best club in the world. 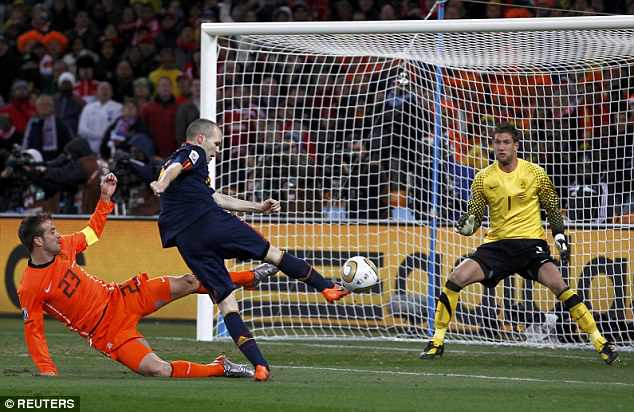 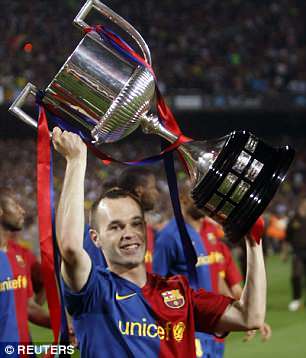 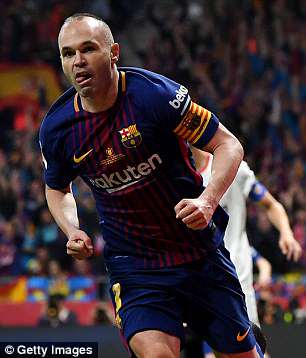 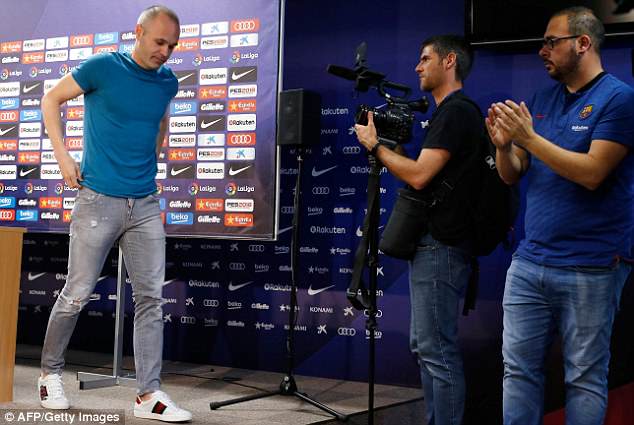 ‘I have been honest with the club that has given me everything. I understand that my time has come to and end. This club deserves the best of me.

‘I’ve been here all my life so it’s very difficult to do this. But it’s the natural process. It was getting harder every season to stay on top.’

Speaking about Iniesta in his press conference on Friday, City boss Guardiola paid tribute to the departing midfielder.

‘I want to say thank you,’ he said. ‘He helped me understand the game better, just watching him and what he does on the football pitch.’

Iniesta has spent all of his senior career at Barcelona and is their most decorated player ever along with Lionel Messi, having lifted 31 trophies. They will both move to 32 if Barca clinch the Liga title on Sunday at Deportivo La Coruna.

The 33-year-old first said he could leave Barca after their 3-0 win over Chelsea in the Champions League on March 14, telling reporters he had to decide whether to accept an offer from China by the end of April.

He was given a standing ovation by both sets of supporters when he was substituted after putting in a virtuoso display and scoring in a 5-0 win over Sevilla in Saturday’s Copa del Rey final.

The midfielder is one of the most loved footballers in Spain after he scored the only goal in the 2010 World Cup final when they beat Holland to lift the trophy for the first time. 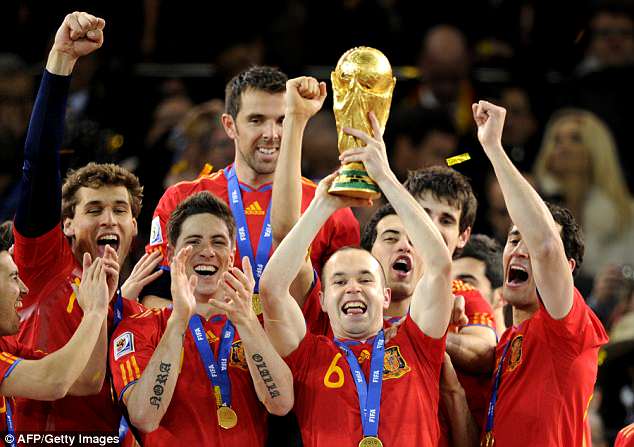 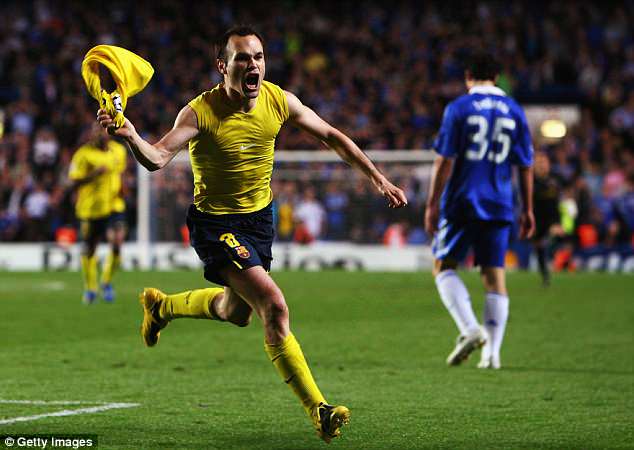 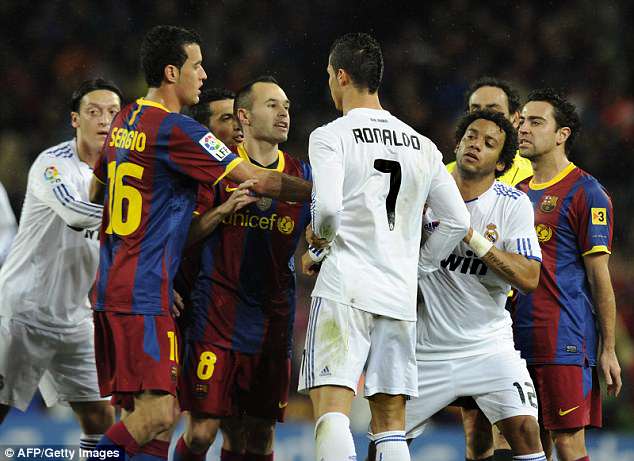 He is also remembered for his touching tribute to his friend, the late Espanyol player Dani Jarque, after scoring the winning goal, ripping off his shirt to reveal a t-shirt saying ‘Dani Jarque, always with us.’

He also won the European Championship in 2008 and 2012 and is routinely given a standing ovation at every ground he plays for Barca. He even gets a positive reception when playing at hated rivals Real Madrid.

Born in the village of Fuentealbilla in Albacete province, Iniesta moved to Barcelona’s youth academy in 1996, aged 12.

Iniesta has made 669 appearances in all competitions for the club since making his debut aged 18 in a Champions League game at Club Bruges in October, 2002 when Louis van Gaal was Barcelona coach.

He will be part of the Spain team at the 2018 World Cup in Russia, after which he is set to retire from international football.