This time, there was no miracle comeback, just a Juventus team willing to sit back so magnificently and regally. The Italian champions thereby might have made a massive stride towards winning this trophy for the first time since 1996, because it looks like the other semi-finalists are going to find it very difficult to score against what may well be the best defence in Europe. Barcelona ultimately found it impossible in this 0-0 draw that kept it 3-0 to Juve on aggregate, and could never generate the kind of storm they did against Paris Saint-Germain. The feeling of the night was too different, the Catalans too wasteful, Juve too strong.

Had Barca even managed that kind of storm, though, it is highly doubtful whether Max Allegri’s marble-hard side would have been blown away by the whirlwind. Juventus look too much like they actually relish classic backs-to-the-wall challenges like this, like they enjoy it. The fist-clenching responses of warriors like Giorgio Chiellini and Leo Bonucci to every individual challenge can testify to that. The anguish on the face of Leo Messi – who missed an unusually high amount of chances for any player, let alone one of his historic quality – only proves it. This is a team that is going to be very hard to beat.

The oddity again was that, just as in the last 30 minutes of the first leg in Turin, Barcelona actually created enough opportunities in the first 20 of the second leg to have at the very least made it 3-2 and a much tenser game.

It did genuinely seem like it was building up to something at that stage, especially when Messi created something genuinely special with a supreme lofted through ball for Jordi Alba, only for the full-back to just fail to make the right connection. Giorgio Chiellini then made a typically concrete block just as the ball seemed set up for Luis Suarez to shoot, before Messi – of all people – then squandered the chance of the first half by screwing the ball wide.

There were two big differences from the PSG 6-1 comeback, though, beyond the fact that Barca hadn’t scored the first-half chances to really unsettle the opposition. First of all, Juventus never looked like they were going to be anything close to as nervy as the French champions. That was displayed within seconds of the start, when they actually went straight up and assuredly attacked Barca, rather than tentatively sitting back. 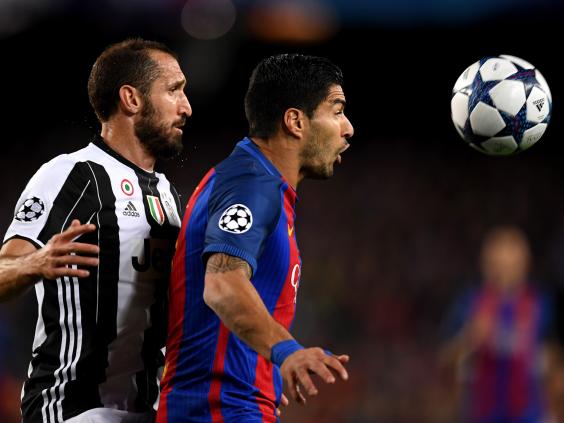 Chiellini kept a lid on a muted Suarez (Getty)

They maybe should have had the early goal themselves, too, either when Gonzalo Higuain blazed over or when Gerard Pique did supremely well to get back and cut out a Juan Cuadrado break. That danger on the counter was always there, but any Juve brittleness was not, not even during that early siege. They were being sternly tested, but staying strong.

Barca probably knew that they needed to get a goal in that period to properly ramp up the pressure and fully test those nerves but, when they didn’t, their frustration was revealed in more ways than just missed chances. They began to get right on top of the referee, complaining for everything, and doing things like petulantly refusing to kick the ball out of play when Mario Mandzukic was injured. 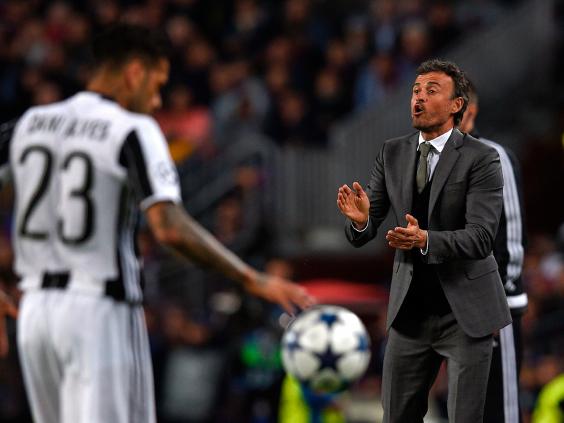 Luis Enrique’s men could not to break Juventus down (Getty)

Worse was the way Neymar, who had again been one of their better players, was letting it get to him with some moments of dissent and drastic challenges. Barca to their credit still weren’t trying anything drastic in attack. Even with the ever-present threat of Cuadrado cutting down the right and firing just wide, they were patiently building in the right way, looking to get the right players in the right positions.

Messi did finally wriggle free on the edge of the box again on 55 minutes, but once more shot narrowly wide, before then curling a free-kick narrowly over. 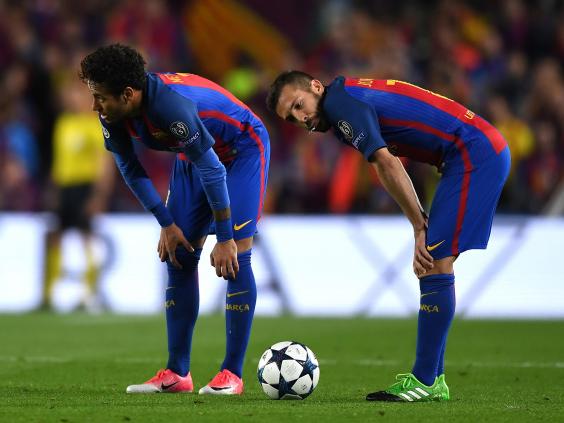 That was the growing frustration with those positions, too. Juve had closed up that bit more in defence, meaning it was harder and harder to get quality ball closer to Gigi Buffon’s goal. It’s harder still, of course, when defenders like Chiellini are always capable of just getting that crucial little touch on the ball to make a big difference as regards where it goes. It was thoroughly deflating, then, when Messi blazed another close-range chance over.

That was once more the contradiction to this tie, mind, and was again reminiscent of the first leg. Juve could justifiably feel they had been so commandingly resolute in defence, but Barca could feel they had enough chances to complete this comeback a few times over.

The talk will now again grow over whether an era has finished, but it could be rather different if Luis Enrique’s team had finished any number of chances over a galling 180 minutes of football. Juventus won’t see it like that. They will argue that, in stopping this Barca so commandingly, their era is only properly starting.