It will take something exceptional if Arsenal are to break the curse which has turned their Champions League round of 16 elimination into one of the rituals of spring and for a time last night a slice of excellent fortune seemed to be suggest a new direction. Then reality bit, as they surrendered a lead and handed their French opponents a one-way ticket to winning this group.

The draw, which leaves Arsenal needing a better result from a challenging trip to Basel two weeks from now than PSG secure from a regulation home tie with Ludogorets Razgrad, was the least the French deserved. The away side made all the running and were the architects of almost everything which was good in the game. As expressions of intended continental dominance go, it was not quite what Arsene Wenger had in mind for this 20th season at this helm.

The sight of Aaron Ramsey claiming to have been struck in the face by Edinson Cavani just before the break, when the striker had shoved at his shoulder with the palm of his hand, was a metaphor for what we witnessed. 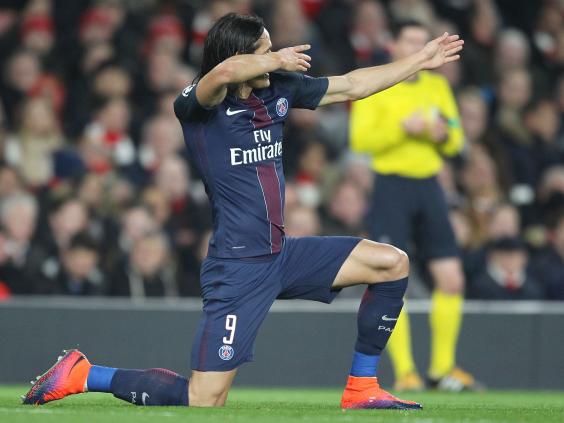 Cavani celebrates opening the scoring at the Emirates (Getty)

Wenger had dispensed with some of his usual circumspection and pronounced before this game that his side now have the quality to win this competition, never mind finish top of a group for the first time since 2011. The course of the first half put that notion into sharp perspective. The ghosts of Hector Bellerin and Santi Cazorla stalked the place.

It was Shkodran Mustafi who was easily rolled by Blaise Mustafi for the goal which suggested this would be a struggle, crossing for Edinson Cavani to slide in his fifth goal in the competition, though there was anaemia all over the field from Wenger’s players.

Alexis Sanchez was as industrious as Arsenal got, also addressing Carl Jenkinson on how to make a meaningful contribution too. The full back is a pale imitation of Bellerin. Aaron Ramsey also offered some fleeting industry, though the central midfield was occupied by strangers, from a North London perspective. 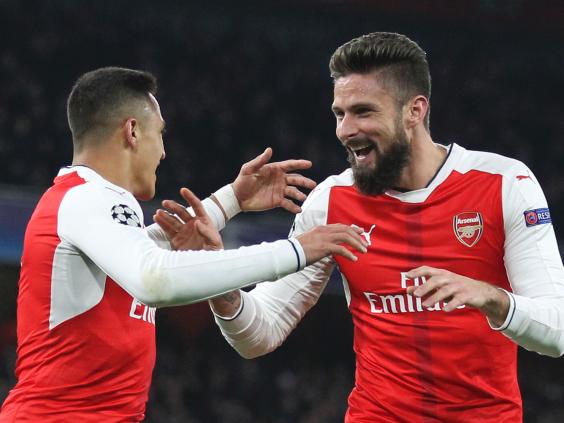 Giroud celebrates with Sanchez after equalising from the penalty spot (Getty)

It was the first time Ramsey had started in central midfield this season and the first time he had operated with Francis Coquelin and the engine frankly didn’t work. Where the supply line to Olivier Giroud, in only his second start of the season, was lamentably poor, the French delivered in abundance to Cavani. Two miscued headers preceded his goal. It was an object lesson in the gulf between the two sides which had been equally visible in Paris.

The Arsenal equaliser on the stroke of half time was as dubious as the performance at that stage. Giroud turned over possession and located Mesut Ozil whose fizzed reverse pass for Sanchez saw the forward crumple under a minimal challenge by Grzegorz Krychowiak. Giroud gleefully despatched the penalty and Arsenal departed for the dressing room with more than they’d deserved.

It had been a smart piece of gamesmanship by Sanchez, positioning his leg in such a way as to ensure there was contact by the defender, though the lifeline did not breathe such ingenuity into the home side’s play. Within seven minutes of the restart, Laurent Koscielny had gifted the ball to Lucas in front of his own, been booked for the panicked scramble to win it back and then watched the Brazilian send the resulting free kick onto the top of the crossbar. 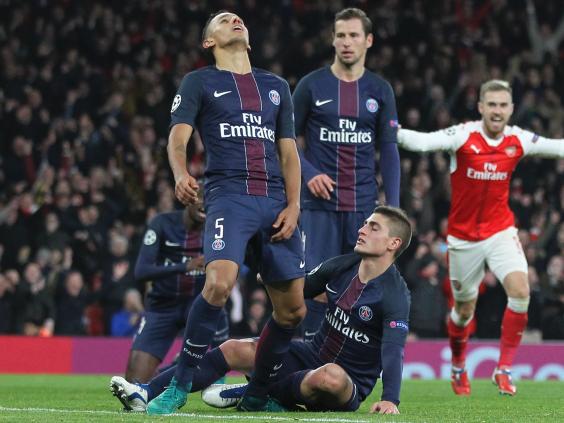 Verratti reacts to deflecting the ball into his own net (Getty)

Arsenal went ahead in a pinball fashion which suggested fate just might be working for them – Marquinos clearing Ozil’s effort straight into Marco Verratti and watching the ball rebound back into Alphonse Areola’s net. The French reaction to the goal was no less than bemusement, leaving them struggling briefly to rediscover their first half superiority. Verokratti, the playmaker, who had spent much of the night demonstrating his capacity to drive the tempo of a game, fell onto his back, staring into the black London sky.

Briefly, Arsenal put their backs into a developing rearguard effort. Jenkinson’s knee was required to divert a dangerous cross to safety as Unai Emery’s players began to rediscover some rhythm. But PSG’s own crucial second arrived with grim inevitability. A corner by Hatem Ben Arfa reached Lucas at the back of the box, whose goalward header was sent on past David Ospina by Alex Iwobi, for the game’s second own goal.

The French side should have been out of sight ten minutes later, when Cavani sprung the offside trap and bore down on Ospina but could only lift his shot at a catchable height. For Arsenal, another challenging Spring may very well await.