“Insanity: doing the same thing over and over again and expecting different results.” Although whether Albert Einstein actually said these words remains unclear, never has a quote so eloquently summed up the plight of a Premier League football club.

In spite of their victory against Middlesbrough here at the Stadium of Light, courtesy of prized possessions Alexis Sanchez and Mesut Ozil, Arsenal remain a side caught on repeat.

Arsene Wenger made six changes from the side that was humiliated at Selhurst Park – the first time the Gunners had lined up with three at the back since May 1997 – but such an overhaul was not enough to cover the cracks and hide his side’s lack of coherence.

Middlesbrough, in contrast, will feel hard done by. The home side put in a valiant performance, with Alvaro Negredo snatching a deserved equaliser minutes after the restart, and enjoyed the lion’s share of chances to push Arsenal to the edge.

Wenger had conceded earlier in the week that he was unsure if questions over his own future at the club were affecting his players’ form – “I honestly don’t know…I hope not” – but tonight was yet another stark reminder of just how much Arsenal have struggled this season, especially on the road.

As such, it was Middlesbrough who started brightest, with the likes of Gaston Ramirez and Grant Leadbitter asking testing questions of the Arsenal backline. While the visitors looked nervy and scatty – with Alex Oxlade-Chamberlain drawing the first card of the game after just two minutes – the home side looked confident and enthused by the challenge ahead. Come the 15 minute mark Steve Agnew’s men had recorded three attempted shots to Arsenal’s zero, with captain Leadbitter’s fizzing shot coming closest.

Indeed, Boro’s persistence almost paid off after the ball was buried into back of the net in the 22nd minute – only for the flag to go up. Arsenal had failed to clear a free-kick beyond the edge of their box, allowing Gaston Ramirez to pounce on the loose ball and pick out Marten de Roon ahead of him. From five yards out, the unmarked midfielder did the rest but his offside position denied the home side what would have been a deserved opener.

Arsenal’s chances, in contrast, were few and far between. A wild, acrobatic half-volley from Aaron Ramsey could only force a corner ball on the half-hour mark while a promising cut-back from Oxlade-Chamberlain, delivered on the right-hand side byline, was intercepted by Leadbitter to deny Olivier Giroud a close-range shot on goal.

Middlesbrough hit back – and hard. A sustained period of pressure culminated in a series of testing deliveries from the right flank that pushed the visitors to the limits of their defending capabilities. With his height and presence in the box, the returning Laurent Koscileny was repeatedly called upon to deter the home side. Were it not for Boro’s indecision and lack of clinical edge, Steve Agnew’s men could have headed into half-time on top. 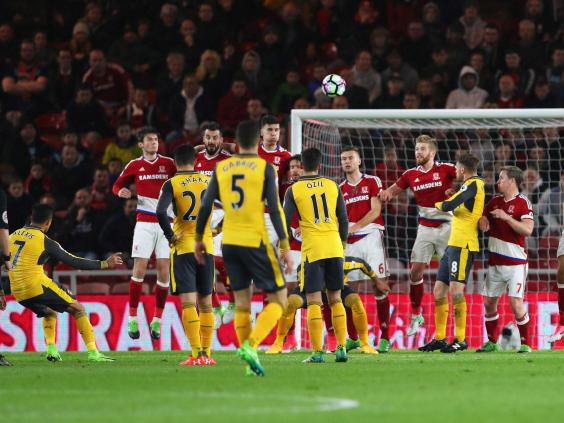 But as been the case for much of Arsenal’s season, the side’s redeemer stepped up to deliver. Dead centre of the goal, and just three yards out from the Middlesbrough box, Sanchez struck with a delicious curled free-kick to pick out the top left corner. A sombre-looking Wenger rose to celebrate his side’s 3000th away goal in English league football and a breakthrough at last.

Their lead lasted a matter of minutes, though. Boro emerged from the break defiant and soon had their equaliser. A misplaced Sanchez pass released Stewart Downing who broke with surprising speed down the right. A neat cut-back ensued, followed by a pin-point precise delivery. Holding off pressure from Koscielny, Negredo stuck out an optimistic leg near the front post to guide the ball past Petr Cech and into the back of the net. 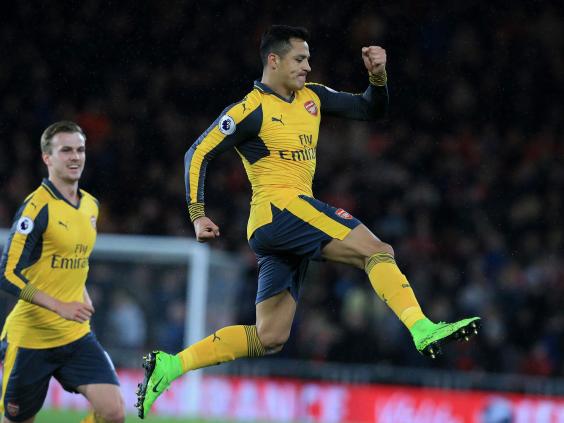 Buoyed by their goal, Boro pushed on. Downing had the chance to become creator-turned-goalscorer moments later but sent his effort from 10 yards out into the stand behind. Daniel Ayala followed this up with his own missed attempt. Leaping courageously through the box to meet Leadbitter’s nod-back, the defender almost added Boro’s second but his effort was blocked and the danger eventually cleared.

Still Middlesbrough came. Substitute Adama Traore marked his arrival with a promising surge into the Arsenal box but was blocked by Koscielny. Calls for a penalty filled the Riverside Stadium but referee Anthony Taylor waved on play. 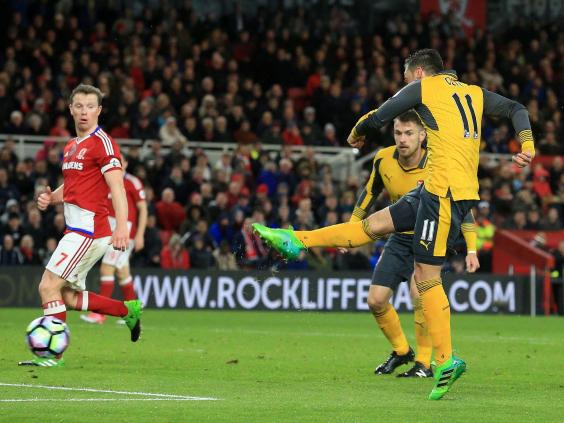 But, once again, Arsenal pulled ahead against the run of play. Sanchez’s floated cross into the box was met by Ramsey’s chested knock-down, setting up Ozil for a low-driven strike that found the bottom left-corner. The German had delivered another underwhelming, lifeless performance but, on this occasion, paid his dues with a well-taken goal.

Boro refused to roll over, fighting to the bitter end, but their determination failed to deliver the desired result. A cruel conclusion for a side that deserved more.

Now level with Everton on 57 points, Arsenal still stand seven points off fourth place. After the disappointment of last week’s shock defeat by Crystal Palace, the Gunners have reacted. But against a side staring relegation in the face, tonight’s victory will have done little to settle the turbulent waters.