endezvous Bay is billed as Montserrat’s only white-sand beach; all the others are volcanic black. When we reached it, the secluded cove was deserted. We followed huge, tractor-like tracks left in the sand by green turtles, and floated in the warm, crystal-clear water as pelicans dived for sprats overhead. Then we dried off – and pulled on our walking boots. This beach doesn’t get crowded because it can only be reached after a stiff hour’s hike. 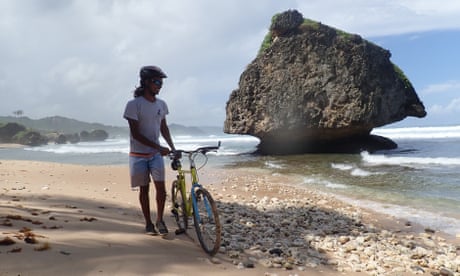 The Caribbean is not an obvious hiking destination but one company is trying to change that. Hike Caribbean launched last September to offer “holidays with hikes” to people who don’t want to just laze on a beach all day. It is not a full-on hiking trip: most walks take a maximum of half a day, so there is still plenty of time to relax with a rum punch. And there is no roughing it with a backpack and a tent – the accommodation is luxurious by the standards of most hiking holidays. Our hotel in Antigua, Sugar Ridge, had three pools, two restaurants, a spa and free shuttles to the beach.

My sister and I started our trip in Antigua, where Hike Caribbean is based. We had a week-long, two-island itinerary; those with more days could fit in three islands. Really keen hikers can tackle the five-peak challenge: 21 days of hiking to the highest points on Antigua, St Lucia, Guadeloupe, St Kitts and Nevis. More islands will be added in future, such as Dominica, which has some of the best hiking in the region but is still recovering from Hurricane Maria in 2017.

Our first hike in Antigua sounded idyllic: through the rainforest in the south-west of the island, down to a string of hidden beaches. Unfortunately, the weather was against us: three weeks of freak rain had made the route too treacherous to attempt. Instead, our larger-than-life guide, Vorn, took us up Boggy Peak, aka Mount Obama, one of the aforementioned five peaks. Usually this hike starts from Sugar Ridge, but the rain forced us to reroute and set off by Jeep. 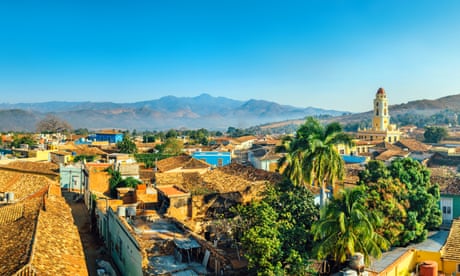 We began knee-deep in water. I had climbed Mount Obama on a previous visit to Antigua with no problems, but torrential rain and squelching mud made it a completely different proposition. Vorn kept our spirits up with his tall tales and encyclopaedic knowledge of the island’s flora and fauna; we seemed to pass a plant to cure every ailment under the sun.

Thankfully, the next day the sun came out as we drove to Galleon Beach. From here, we followed a gorgeous coastal trail up to Shirley Heights, a former military lookout. We stopped at the Mermaid Gardens, where the sea has carved out a natural swimming pool – though the usually flat water was raging due to the recent rains, so we couldn’t take a dip. We walked through cacti and clouds of butterflies to the summit, with its views over Nelson’s Dockyard in English Harbour and far beyond.

Back at the hotel, we stretched out our sore muscles in a sunset yoga class – Hike Caribbean also offers trips combining hiking with yoga, swimming or birdwatching. Sugar Ridge is built into the hillside and the outdoor yoga terrace is right at the top, a stunning setting for a few sun salutations.

From Antigua, it is a thrilling 20-minute flight in an eight-seater plane or a stomach-churning 90-minute boat trip to neighbouring Montserrat (we took the plane there and the boat back). Here, the hiking stepped up a gear. As well as the beach trip, our new guide, Scriber, took us on a five-hour trek along a challenging new trail in the Centre Hills. It was seriously steep going, but the tropical forest was enchanting. Halfway up, Scriber stopped to call the Montserrat oriole, the island’s national bird. As if by magic, a pair appeared: an olive-green female and a bright yellow-and-black male. The species was critically endangered until 2016 and is still classed as vulnerable, but conservation efforts are bearing fruit.

Sadly, the same cannot be said for the mountain chicken, a much-loved giant frog that has been decimated by disease and habitat loss. Officially, it is critically endangered in Montserrat and Dominica, its two surviving relative strongholds, but Scriber thinks it is now extinct on his island. He becomes visibly emotional: “The forest used to be a symphony – the male could call from dusk till dawn.” The species is being bred in captivity, and Scriber hopes it will be reintroduced successfully.

As we climbed higher, we reached an elfin forest, a rare ecosystem featuring miniature trees. At the top, the thick cloud parted for a precious few minutes before swallowing up the hills again.

After the hike, we headed to the Attic restaurant in Olveston, which specialises in chicken roti and fresh juices made from tropical fruits, such as soursop and starfruit. The must-try dish in Montserrat is goat water, a thick, clove-scented stew generally eaten at weddings and funerals. I tried it at a local family’s house, but it is also served at the People’s Place in St Peter’s district on Fridays.

Life in Montserrat changed irrevocably for humans and wildlife alike in 1995, when the Soufrières Hills volcano began erupting; further eruptions in 1997 killed 19 people. The capital, Plymouth, was destroyed, two-thirds of the population emigrated and more than half the island is still an exclusion zone. Islanders had to start from scratch, relocating everything from homes and hospitals to the airport. The volcano is still considered active but hasn’t erupted since 2010 and is extremely closely monitored. Visitors can watch a documentary on the eruptions at the Hilltop Coffee House, an excellent cafe-cum-museum.

Prior to 1995, Montserrat was an upmarket tourist destination. The Beatles producer George Martin opened a recording studio there in 1979, and stars such as the Rolling Stones made albums in the sunshine. (We stayed in Martin’s former home, Olveston House, which is now a guesthouse.) Today, the tourist board is marketing “the buried city”, Plymouth, as a modern-day Pompeii. As it is so close to the volcano, you still need a government permit and a police guard to visit – which Hike Caribbean can organise – and it is an astonishing, unsettling, sobering sight. I wandered around the abandoned streets, past a school, a hotel and a supermarket, all of which were buried under volcanic mud and ash. Photographs reveal a two-storey office building that once stood five storeys high; the spire is all that remains of the church.

But beyond buried Plymouth, life is returning to the island – ash is a good fertiliser and the hills are lush and green once more. Montserratians hope the tourists will return, too, and hiking is just another good reason to do so.

The trip was provided by Hike Caribbean, which has a seven-night trip to Antigua and Montserrat from £1,395, including B&B, four guided hikes and internal flights or ferries. BA has return flights from Gatwick to Antigua from £420