Vote Leave broke the law during the EU referendum by exceeding legal spending limits, a Brexit activist has claimed.

Vote Leave chief Dominic Cummings has already denied the claim and said he checked with the Electoral Commission before donating money to the group.

“Leaving the European Union, I agree with.

The Electoral Commission is already looking into whether Vote Leave spent more than it was entitled to during the campaign.

Brexit Secretary David Davis told the BBC it was the job of the commission, not ministers, to make a judgement.

Labour’s Tom Watson said that “if needs be” the police should investigate too.

Mr Sanni told the Observer that Vote Leave donated £625,000 to the founder of BeLeave, Darren Grimes, before the June 2016 referendum.

Vote Leave would have gone over its campaign spending limit of £7m if it had spent the money.

Mr Sanni claimed Mr Grimes was not in control of how the money from Vote Leave was spent and everything they did they passed through ground campaign manager Mr Parkinson – who is now the prime minister’s political secretary.

He told the newspaper that most of the donation went to Canadian data firm Aggregate IQ, which has been linked to Cambridge Analytica – the firm facing claims it amassed the data of millions of people without their consent.

Mr Sanni said he and two other pro-Brexit friends reported the overspending allegation to the Electoral Commission on Thursday.

“In effect they used BeLeave to overspend, and not just by a small amount… Almost two thirds of a million pounds makes all the difference and it wasn’t legal,” said Mr Sanni, who first worked as a Vote Leave outreach volunteer before working for BeLeave.

“They say that it wasn’t coordinated, but it was. And so the idea that… the campaign was legitimate is false.”

Vote Leave has previously said it made the donation to Mr Grimes because it was coming up to its £7m spending limit and wanted a way of using the £9.2m it had raised from individuals and companies on campaigning activities.

The campaign separately spent £2.7m on the services of AIQ in the run-up to the EU referendum. 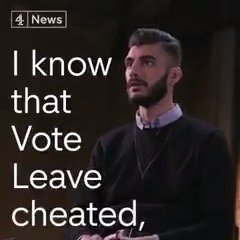 “We’re going on a path of Brexit based on lies, based on cheating, based on essentially a scam”. Brexit insider accuses Vote Leave of cheating- in response the PM’s political secretary denies the claims and “outs” the accuser as gay #TheBrexitWhistleblower https://www.channel4.com/news/brexit-campaign-was-totally-illegal-claims-whistleblower …

BeLeave was set up to give young pro-Brexit campaigners a voice during the referendum.

Separate campaign groups could spend up to £700,000 if they registered as permitted participants.

The foreign secretary – and leading campaigner for Vote Leave – Boris Johnson has dismissed the claims as “utterly ludicrous”.

Observer/C4 story utterly ludicrous, #VoteLeave won fair & square – and legally. We are leaving the EU in a year and going global #TakeBackControl #GlobalBritain

In a blog on Friday, Mr Cummings denied allegations of links between his campaign and Cambridge Analytica and said the claims were “factually wrong, hopelessly confused, or nonsensical”.

Lawyers for AIQ told Channel 4 News that it had “never entered into a contract with Cambridge Analytica” and it had “never knowingly been involved in any illegal activity”.

In a “personal statement” issued to Channel 4 News, Stephen Parkinson denied the allegations and said he was confident he had stayed within the law and spending rules “at all times”.

He said he was “saddened” by the “factually incorrect and misleading” statements from Mr Sanni, who now works for the Taxpayer’s Alliance.

Earlier, Mr Sanni said – in a statement issued through his lawyers – that Mr Parkinson had outed him as gay in his original response.

Mr Sanni, a British Pakistani, said he was forced to tell his family and that relatives in Pakistan could be in danger as a result. 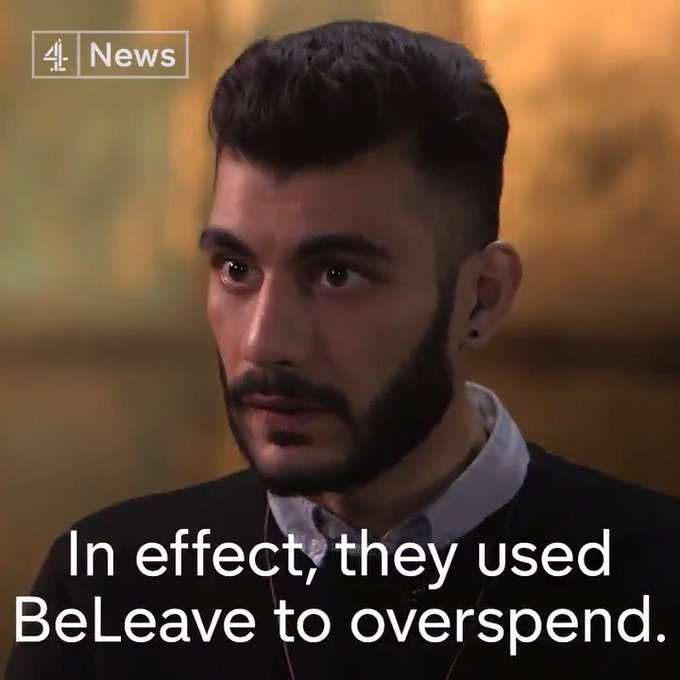 “The idea… that the campaign was legitimate is false.” A Brexit insider accuses Vote Leave of cheating – in response the PM’s political secretary denies the claims and “outs” the accuser as gay. #TheBrexitWhistleblower https://www.channel4.com/news/brexit-campaign-was-totally-illegal-claims-whistleblower …

In his original statement, published on Mr Cummings’ blog on Friday, Mr Parkinson said he dated Mr Sanni for 18 months, before splitting up in September 2017.

“That is the capacity in which I gave Shahmir advice and encouragement, and I can understand if the lines became blurred for him, but I am clear that I did not direct the activities of any separate campaign groups,” he said.

A solicitor for Vote Leave told the programme the campaign had been cleared twice on this issue by the Electoral Commission.

The Electoral Commission said: “The commission has a number of investigations open in relation to campaigners at the EU referendum; it does not comment on live investigations.”

Green Party joint leader Caroline Lucas told the BBC’s Andrew Marr Show: “This is a really complex network – but big, big questions need to be asked and it goes much wider than just the referendum.”

He added: “If it’s got to be investigated again, well then, so be it. But I think most people out there feel we had a perfectly fair referendum.”