The Royal Navy’s fleet of frigates and destroyers has hit a “historic low” and is in danger of falling further to a “completely unacceptable level”, MPs have warned.

The Commons Defence Committee called on the Ministry of Defence to clarify how long eight new “Type 26” destroyers would be delayed for – and said officials should produce “timed production schedules” to make sure the ships did not fall further behind.

The MPs also urged the Government to develop a proper strategy to ensure the UK’s defence shipbuilding workforce did not atrophy, as they said it had during periods of austerity and low shipbuilding. 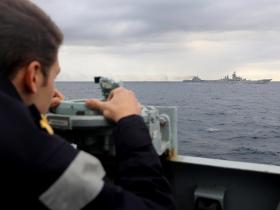 The warning that Britain could lack enough usable escort class ships comes just weeks after the Royal Navy escorted Russian warships through the English channel on their way to Syria.

The MoD has said it will build eight new Type 26 Global Combat Ships and at least five new General Purpose Frigates to replace its 13 existing Type 23 Frigates – an ageing design that dates from the 1980s and which is coming up for replacement.

However, the MPs worry that delays to construction could leave the UK’s escort fleet with gaps for years – as they have done for the Royal Navy’s aircraft carrier component.

The Government’s National Shipbuilding Strategy is slated to be released before the Autumn Statement – which is this due on Wednesday this week.

The strategy will outline how the Government plans to spend the roughly £19bn on surface ships for the navy.

The MPs said: “The MoD recently announced that construction of the Type 26 will commence in the summer of 2017.

“However, that date remains dependent upon a successful conclusion to negotiations on both the design of the ship and the contract with BAES, the main supplier.

“The MoD must provide greater clarity and detail on the timing of the construction phase, including a clear statement that it has the necessary funds to deliver the programme expeditiously.

“The importance of this cannot be overstated. The Type 23 frigates will start to come out of service in 2023 at 12-monthly intervals. If the new frigates are not delivered to that decommissioning timetable, ship numbers will be reduced further from what is already an historic low.