The BBC has spoken to Rohingya Muslims who suffered crippling injuries after apparently stepping on army landmines as they fled violence in Myanmar.

One of them, a 15-year-old boy being treated in Bangladesh, lost both legs.

A woman at the same hospital said she had trodden on a landmine after she and her family were fired on. It’s unclear who laid the mines in either case.

More than 300,000 Rohingya have escaped Myanmar (Burma) in recent weeks. The army there denies targeting civilians.

A Myanmar military source told Reuters news agency that mines had been placed along the border in the 1990s and the army had since tried to remove them, but added that none had been planted in recent days. 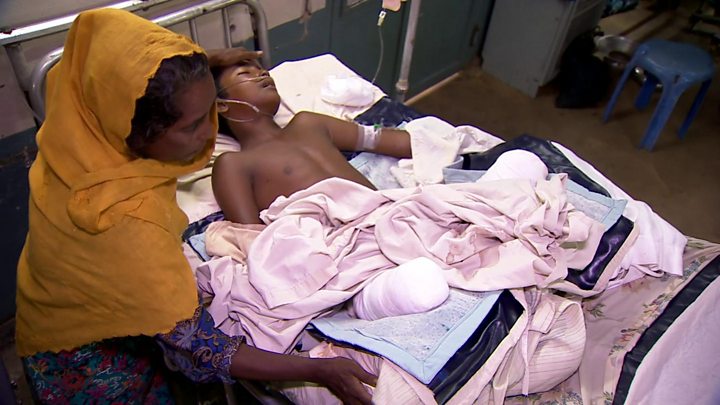 The hospital visited by the BBC has seen an influx of people with landmine injuries, doctors say.

The 15-year-old boy, Azizu Haque, arrived with his legs destroyed. His brother, in another hospital, suffered the same fate, his mother says.

“Their injuries are so bad it’s as if they are dead,” she told the BBC. “It’s better that Allah [God] takes them, they are suffering so much.”

The injured woman, Sabequr Nahar, says she fled Myanmar because the military had been targeting her community, and she was crossing the border with her three sons when she stepped on a landmine.

Azizu Haque’s body has been devastated by a blast, his legs gone, and parts of his torso also injured. His doctor is visibly emotional when he talks of trying to save him – he doesn’t expect to be successful. Azizu has a rare blood type, and the hospital has no blood bank, and has run out of donors.

Next door in the women’s ward, Sabequr Nahar is a tiny, exhausted figure. She says she crossed the Myanmar border behind her three sons – they got through unscathed.

It is unclear who laid the traps that caused these injuries – and when – but the condition of these people nevertheless raises questions about the Myanmar government’s version of events.

The violence began on 25 August when Rohingya militants attacked police posts in the northern state of Rakhine, killing 12 security personnel.

The attacks triggered a vast security operation that has drawn international criticism.

Rohingya who have fled Myanmar say villages have been burned and civilians attacked in a brutal campaign to drive them out.

The UN Security Council said it was looking to meet on Wednesday to discuss the violence after Sweden and Britain requested a closed-door meeting on the “deteriorating situation” in Rakhine state.

The Rohingya, a stateless mostly Muslim minority in Buddhist-majority Rakhine, have long experienced persecution in Myanmar, which says they are illegal immigrants.

Bangladesh is already host to hundreds of thousands of Rohingya who have fled previous outbreaks of violence in Rakhine.

Existing refugee camps are full and the new arrivals are sleeping rough in whatever space they can find, reports say.

But the Rohingya are extremely unpopular inside Myanmar. On Sunday, police fired rubber bullets to break up a mob attacking the home of a Muslim butcher in Magway region in central Myanmar. One protester was quoted by AFP news agency saying it was a response to events in Rakhine.