Six “reform prisons” are to be created in England and Wales as part of a pilot to tackle high levels of violence and re-offending, David Cameron has said.

The governors would have autonomy over their operation and budgets, he said.

The PM also announced new powers to speed up the deportation of foreign inmates and plans for all jails to be assessed through league tables.

Penal charities said reforms would not work if prisoners were “crammed into filthy institutions with no staff”.

Downing Street said the creation of the “reform prisons” from existing jails would happen by the end of the year, although it did not name any locations.

Mr Cameron said “current levels of prison violence, drug-taking and self-harm should shame us all”, with a typical week seeing 600 incidents of self-harm, at least one suicide and 350 assaults including 90 on staff.

In what he described as the “biggest shake-up of prisons since the Victorian era”, he said prisoners should be seen as “potential assets to be harnessed” and the “failure of our system today is scandalous”.

Ahead of his speech to the Policy Exchange think tank in central London, Mr Cameron was shown around HMP Onley, a category C prison near Rugby, where he met prisoners being trained in bicycle repair and barista skills.

Mr Cameron said the government would accept the recommendations made in Dame Sally Coates’s review of prison education, due to be published soon, including a promise to protect the £130m budget.

Prisons in England and Wales in 2015

Former Liberal Democrat MP and education minister David Laws will help develop a new scheme through organisations such as TeachFirst to encourage graduates to take up teaching posts in prisons.

BBC home affairs correspondent Danny Shaw said it was highly unusual for a prime minister to take such a close interest in prison reform, but Mr Cameron wants to make it a “great progressive cause” in British politics.

Last month, the outgoing chief inspector of prisons in England and Wales said conditions in adult prisons had deteriorated over the past five years.

Juliet Lyon, director of the Prison Reform Trust, said Mr Cameron’s proposals were “only part of the equation – you have got to look at what drives crime” but the focus was long overdue.

“We need action now to tackle sentence inflation and the profligate use of prison. Then the prime minister’s vision can become a reality.”

Simon, who was released from prison in June after serving 16 years of a life sentence, told the BBC “more professional staff, more support and more education” was key.

“Taking a humane and personal approach towards addressing offending behaviour, allows them to access support and build a better self – to the benefit of all in society.”

The prime minister said governors would have control over the way they run their prisons. This would include “total discretion” on budgets, and the ability to opt out of some of the thousands of pages of rules and regulations set in Whitehall. 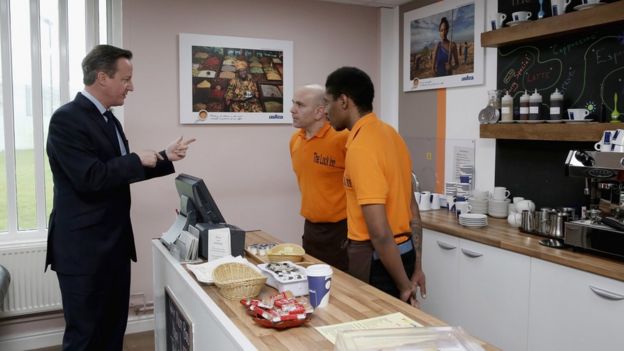 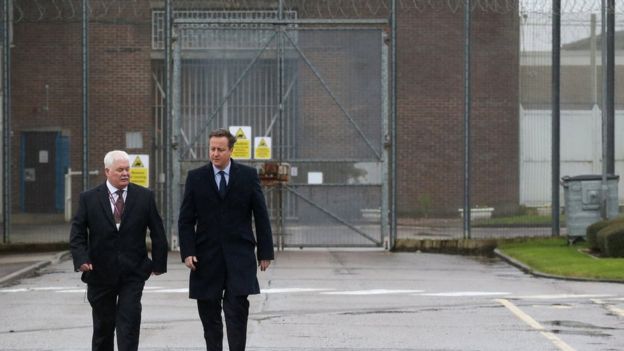 He was shown around the prison by governor Stephen Ruddy

“We need prisons. Some people – including, of course, rapists, murderers, child abusers, gang leaders – belong in them,” he said.

“I also strongly believe that we must offer chances to change; that for those trying hard to turn themselves around, we should offer hope; that in a compassionate country, we should help those who’ve made mistakes to find their way back onto the right path.”

The prime minister said ministers would legislate to require foreign criminals to declare their nationality in court as presently this does not take place early enough “and this can hamper our ability to deport them”.

Shadow justice secretary Lord Falconer welcomed the government plans but said the “scandalous failure David Cameron condemns is his own”.

He said: “The Tories have had five years to improve our prisons and we have heard promises of ‘rehabilitation revolution’ many times before.” 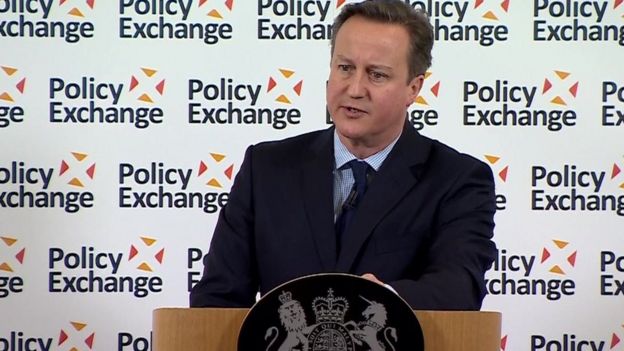 The prime minister has already announced plans to find alternatives to custody for pregnant women or new mothers and confirmed that a pilot scheme to track offenders by satellite would launch later this year.

And in November last year the government said nine new prisons would open in England and Wales under plans to close Victorian-era jails in a bid to save about £80m a year.