For all the talk of saving this game, England it seems would have had defy the laws of physics on this final-day pitch as well as India’s bowlers to escape from this Second Test with a draw.

As it is they will head to Mohali tomorrow for the start of the Third Test on Saturday 1-0 down in the series after a comprehensive 246-run defeat.

England can have few complaints even if their efforts in taking this match to the final day were admirable. In truth this match was lost when they were bowled out for 255 on the third day to concede a 200-run first-innings deficit.

India were just too ruthless and the fear now is Virat Kohli’s side will press home their advantage and go on to dominate in the remaining three matches.

India are ranked No1 in the world for a reason and in home conditions they are virtually unbeatable. England were the last team to defeat them in their own backyard, in Kolkata four years ago.

Since then India have won 13 of 15 Tests on home soil and they will fancy their chances of extending that run over the coming weeks to exact revenge on an England side against whom they have lost their past three series.

The equation for Alastair Cook’s side, who started this final day on 87 for two, was simple. A minimum of 90.4 overs needed to be batted out to deny India victory.

In the end they lasted just 38, the loss of five wickets before lunch proving terminal.

Cook’s dismissal to the final ball of the fourth day was perhaps the moment those chances of saving the game were lost.

England’s captain had batted for close to four hours in making 54, the slowest of his 53 Test half centuries coming in 172 balls.

Cook and Haseeb Hameed had seen off 50 of the 150 overs England needed to negotiate to save the game. Attempting to chase down the target of 405 they were set by India on the fourth day was never an option.

Famous last-day escapes in Cardiff, Centurion and Cape Town and Auckland over recent years had fuelled the notion that perhaps saving the game was possible.

Yet the nature of this pitch in Visakhapatnam was all too evident when Hameed was dismissed by a Ravichandran Ashwin delivery that kept cruelly low. With such variable bounce and turn offered to the bowlers, survival is a matter of luck.

The pitch also plays tricks on your mind and, after the early dismissal of Ben Duckett on this fifth morning, England’s minds appeared scrambled.

Duckett may well go on to have a fine Test career. However, he will surely now be dropped for the Mohali Test, his latest dismissal at the hands of Ashwin his third in as many innings this series.

Duckett, shifted down the order to No4 from the opening position he held during his recent debut series in Bangladesh, simply cannot play Ashwin, India’s premier spinner who has clearly got inside his head. 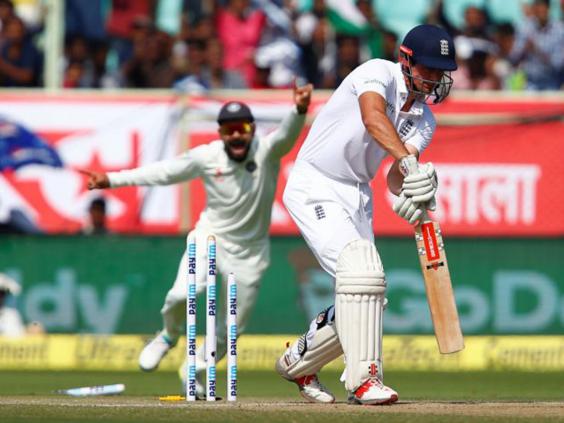 He lasted 16 balls for his duck in this innings, attempting an aggressive sweep against the sixth delivery he faced from Ashwin and seeing the ball loop up off his gloves and into the hands of wicketkeeper Wriddhiman Saha.

England were now 92 for three just five overs into the day and India had the early wicket they needed to fuel their belief.

Joe Root, unbeaten on five overnight, was joined at the crease by Moeen Ali. The fifth-wicket pair negotiated 30 balls before Moeen prodded forward defensively to Ravindra Jadeja’s left-arm spin and was caught by Kohli at short leg.

Root, who had earlier successfully reviewed a caught behind decision off Jadeja, now had Ben Stokes for company. The pair lasted 38 minutes and 11.4 overs before the Durham all-rounder was bowled by a beautiful, turning delivery from debutant Jayant Yadav that beat his outside edge. 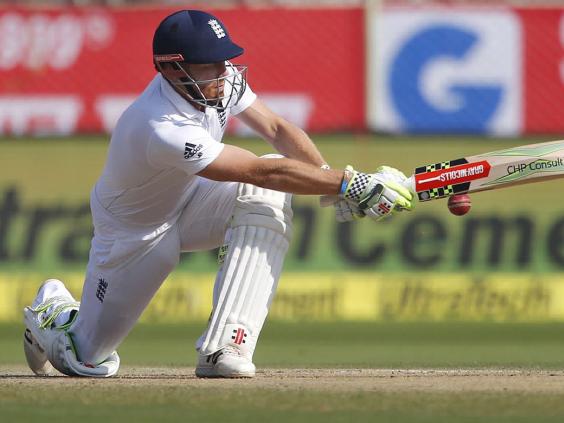 Bairstow was 34 not out (Getty)

India had taken the second new ball by then and it did for Root, who departed two overs later when trapped lbw in his crease by Mohammed Shami.

England were now 115 for six and still had 63 overs to bat if they were to save the game.

By now that was just a theoretical possibility, stretched even further beyond the bounds of probability when Adil Rashid gave Shami another wicket, edging behind after playing a reckless, airy shot outside off stump.

At lunch, with England 142 for seven having seen out 33 overs in the morning session, India knew victory was a formality. With at least 57 left to complete the job it was never in doubt.

Ashwin ensured the inevitable wasn’t delayed too long when he bowled Zafar Ansari – England’s eighth wicket – for an 11-ball duck with just his second delivery after lunch. Ansari couldn’t do much as the ball gripped off the pitch and clattered into off-stump.

Stuart Broad lasted seven balls before he was out lbw sweeping to Jayant. He reviewed in vain.

Jayant then ended a fine debut with the wicket of James Anderson the very next ball, the leader of England’s attack out for a King Pair after his duck in the first innings. India reviewed the original not out decision to their lbw appeal and were rewarded with the final wicket they needed.

England had lasted just 27 balls after lunch in being bowled out for 158.

It now seems a long way back in the series for them from here.