Masks at the ready – the Venice Carnevale, or carnival, takes to the streets from 11-28 February. Events are largely on weekends, which means that during the week, the atmosphere is quieter, allowing you to indulge in more local activities like stuffing yourself with traditional frittelle doughnuts and drinking hot zabaione (kind of like a whipped pudding cocktail).

But February is also your last chance to enjoy the city’s off-season – the hordes arrive in March. And, as Justin Francis of Responsible Travel told The Independent recently, if Venice is to survive, people should try to visit more responsibly. It helps to avoid the obvious places, buy local, and go off the beaten track – here’s how to do all that in a weekend.

Fittingly, Venice is shaped like a fish. Its 118 islands are largely crammed into one small area covering six canal-streaked sestieri, or districts. The historical centre is San Marco, but on this trip you’ll be spending more time in the lesser-visited Cannaregio, Castello and Giudecca.

The Grand Canal bisects the Venice “mainland”; you can cross it via one of four bridges, on a traghetto (a gondola that acts as a bus, ferrying passengers back and forth across the canal) or by hopping on a vaporetto waterbus. Venice is surprisingly compact and walkable, but it’s still worth buying a travel card – a single vaporetto ride costs €7.50 and lasts 75 minutes, but a 48-hour card costs €30.

Start in Cannaregio, perhaps the least touristy of Venice’s six sestieri, at the 15th-century church of Madonna dell’Orto (1), better known as the church of Tintoretto, 10 of whose paintings are housed inside. It’s open 10am-5pm on Saturdays, 12pm-5pm Sundays.

From there, walk east along the Fondamenta Contarini, turning right across the bridge when it ends, and right again when you hit the next canal, the Rio della Sensa. At the end of Campo de l’Abazia, cross the bridge to your right where you’ll find the Scuola Grande della Misericordia (2), the least known of Venice’s scuole or confraternities (open 10am-6pm, Wednesday to Sunday, free admission). 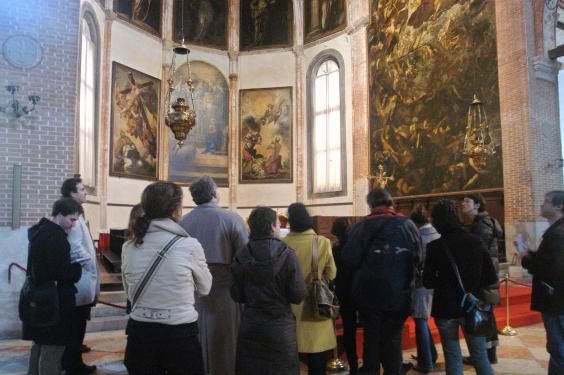 From there weave left and left again to hit the lagoon once more. Walk east along Fondamente Nove, past the Gesuiti church (3) with its marble-clad interior – look to your left as you walk to see the cemetery island of San Michele and Murano behind it. At the hospital turn right – the building is built around the Scuola Grande San Marco (4), whose original gilded coffered roof is worth a pit-stop (open Tuesday-Saturday, 9.30am-5.30pm, entry €5).

A two-minute thread across bridges and through alleys takes you to Campo Santa Marina where at number 5908, Pasticceria Didovich (5) (00 39 041 523 0017; no website) has been serving Venetian and Austro-Hungarian cakes and snacks for over 40 years. Ask which primi are on offer today – the creamy pasta dishes are something to behold. Finish with a frittella, the traditional doughnuts served during Carnevale. Didovich’s are the best in the city.

Next to the Rialto bridge, a grand 16th-century trading hall reopened last October as Venice’s most swish department store, T Fondaco dei Tedeschi (6). Head straight to the top floor where the roof terrace offers arguably the best view of Venice: vaporettos, gondolas and private boats looping round the Grand Canal; a bird’s eye view of the newly refurbished Rialto; and the entire city skyline, from the domes of St Mark’s to the hulking Frari church, and the delicate Ca’ d’Oro palace to the slim bell tower of San Francesco delle Vigne church. On a clear day, you can see the Alps.

Cross the Rialto to wander around the market (7) (Campo della Pescheria, 30125) on the other side, which has been going strong for 700 years. The famous morning fish market will be over by this time of day, but the greengrocer stalls are piled high until nightfall.

From there, follow the signs to Frari, which take you to the San Polo neighbourhood. Here, on Calle dei Meloni, you’ll find Il Pavone (8) (00 39 041 522 4296; no website), where Paolo Pelosin creates notebooks, journals, pencils and even wastepaper baskets from hand-marbled paper. Ask him how he does it and he’ll talk you through the process in his workshop out the back. 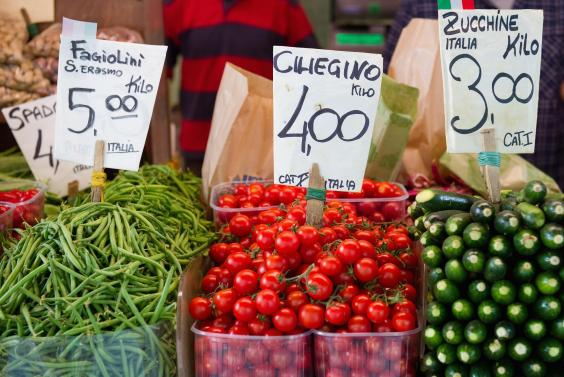 Take in the colours at the historic Rialto market (Getty)

From Il Pavone (8), either retrace your steps one block and then turn right to catch the vaporetto at San Silvestro (9), or continue down Calle dei Meloni (which takes on other names every few blocks) to reach San Tomà (10), where you can choose between a vaporetto or traghetto (public gondola which crosses the Grand Canal). Either way, you’re getting off at Sant’Angelo.

A short walk away, near the Palazzo Fortuny gallery, is Teamo wine bar (11), an upmarket take on Venice’s traditional bacaro taverns. Stand at the bar with locals or sit on the comfy banquette – there’s a good selection of local wines and the service is always friendly. Say ciao to Honey, the resident dog.

Next to the Fenice opera house, Antico Martini (12) is one of those rare grande dames that even locals love – come before a performance and you’ll find it buzzing. Established in 1720 as a café, everyone from Charlie Chaplin to Richard Burton has come for the top-notch seafood, posh cicchetti (sort of like Venetian tapas) and famous risottos. Its historic dining room, the Sala Cherubini, is in the process of being registered as a national historic monument. 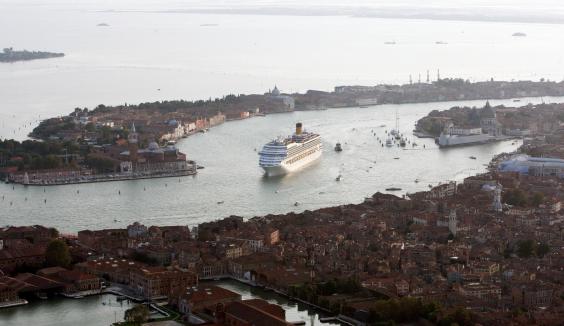 You’ll spend much of day two on Giudecca, the island on the left, where locals still live (Getty)

Trentino-based pasticceria chain Majer has eight locations across Venice, but the Giudecca branch (13), which opened in December 2015, is the biggest, and doubles as a restaurant. Sit at one of the tables lined up on the waterside, overlooking the Zattere and St Mark’s in the distance – and have something sweet or one of the genovese focaccias stuffed with grilled vegetables. 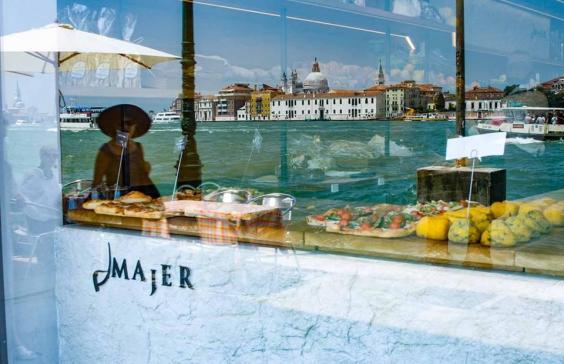 Venice’s “parks” (like the Giardini and the tree-lined stretch of Sant’Elena) aren’t really worth writing home about, but walking along Giudecca is a far more Venetian experience. From Majer, head east (towards San Marco), straight along the waterfront. As well as the views of Zattere and the shimmering Giudecca Canal you’ll pass locals walking their dogs, spy rare gardens through gateways and over walls, and pass the Redentore church, designed by Palladio.

At Zitelle, take a right down Calle Michelangelo and follow it to the other side of the island for spectacular lagoon views and a sneaky walk through the garden at Villa Hériot (14), a 20th-century Neo-Gothic palazzo looking towards the Lido. Now home to various organisations, you’re allowed in the garden, but not the building.

Right by the Zitelle vaporetto stop, the building that looks like a Gaudi-esque riff on the Doge’s Palace is Tre Oci (15), built in 1913 for artist Mario de Maria. These days it’s one of the more forward-looking galleries in town, focusing predominantly on photography exhibitions. The current show, about the Arctic, runs until 2 April, but exhibits aside, it’s worth the €12 entry fee for the building – and its astonishing views of San Marco – alone. 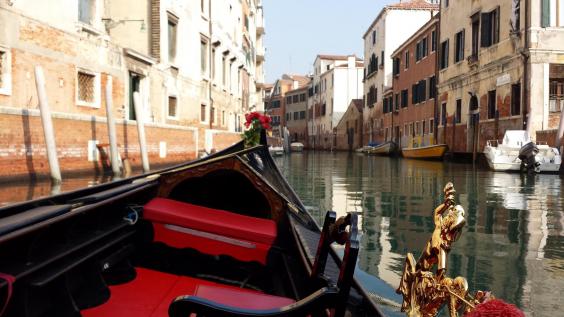 Riding a gondola is for a good cause, thanks to the launch of Gondolas4all (Julia Buckley)

Never set foot on a gondola because you wouldn’t be seen dead succumbing to a tourist trap? Understandable. But now you’ve a reason to get onboard with what, actually, is an unforgettable experience – in fact, you could say it’s your moral obligation to do so.

Last April, Gondolas4all launched the world’s first wheelchair-accessible gondola station – hugely symbolic, it’s the brainchild of two gondoliers who’ve received no financial backing from the city. They’re paying off the €120,000 cost with crowd-funding; non-wheelchair users can pre-book a ride (in a normal gondola) and donate €10 to the project as you do so. From Zitelle, take the number 2 vaporetto to Piazzale Roma (16), where they’re based.

For the ultimate Venice private view, book a tour with the Wigwam Club Giardini Storici Venezia. Remember those gardens you caught glimpses of on Giudecca? Venice is full of them, and Mariagrazia Dammico and her team have access to over 80. Tell them what you like and they’ll tailor-make a tour for you, usually by area. Local-heavy Cannaregio has some beautiful gardens, some of which – like the Casino degli Spiriti (17) – have views across the lagoon and towards the Alps. 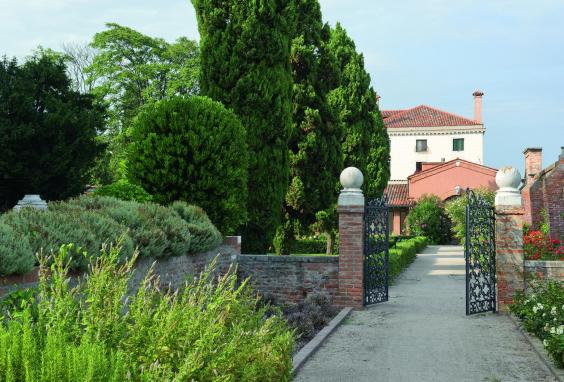 Flying to Venice’s Marco Polo Airport (18) involves one of the most beautiful descents in the world, giving great views across the lagoon. Airlines flying from the UK include Monarch from Birmingham, Gatwick and Manchester, easyJet from Bristol and Gatwick, and British Airways from Heathrow and Gatwick.

Marco Polo also offers one of the most beautiful public transport rides into town on the Alilaguna boats. There are three lines – which to take will depend on where you’re staying. Tickets cost €15 each way and boats leave roughly every half hour.

There are also coaches going to Piazzale Roma at the top of the Grand Canal, but the atmospheric boat ride is incomparable. Water taxis are much faster than the Alilaguna, taking about 30 minutes as opposed to 1-2 hours, but cost at least €120 one-way. 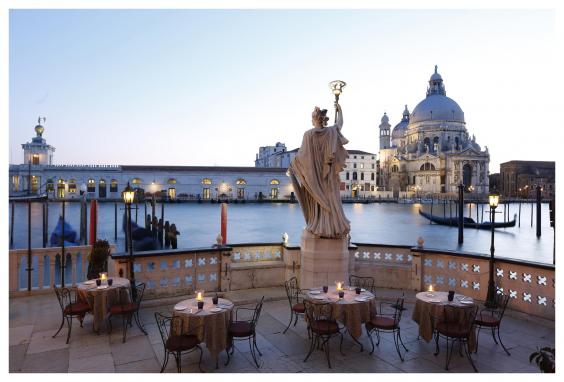 The Bauer hotels (of which there are three) aren’t just locally owned, but have deep links to the community (for example, their organic toiletries are made at the local women’s prison). Only one is open year-round: The Bauer (19), a 1940s Brutalist gem (or eyesore, depending on your attitude to modern architecture) adjoining a classical 18th-century Grand Canal palazzo. These used to be sister hotels, but were merged last year – rooms are in the modern building, suites in the old one. Doubles from €250 per night, B&B.

Unlike most Grand Canal hotels, where you incur an eye-watering supplement for a room with a view, all the rooms at Palazzo Barbarigo sul Canal Grande (20) have canal views – either the Grand or the tributary running into it. The look is sexy Art Deco, as opposed to typical Venetian damask. Doubles from €200, B&B.

For a taste of old Venice – though with modern comforts – you can’t do better than the family-owned Hotel Flora (21). In a prime San Marco location with a rare garden, rooms are simple but beautifully styled with antiques, and staff know everything about their beloved city. Doubles from €108, B&B.