A seven-year-old girl from Hereford who penned a letter toGoogle asking for a job, was delighted to receive a personal response from the chief executive himself.

Chloe Bridgewater sent a handwritten letter to the tech giant in which she noted her computer skills and her interest in working in a place where she can “sit on bean bags and go down slides”.

The letter, first published by Business Insider, makes a pretty solid case for hiring Ms Bridgewater. She wrote in it that she is experienced in tablet usage, computer robot games, swimming, spelling, reading, and sums. 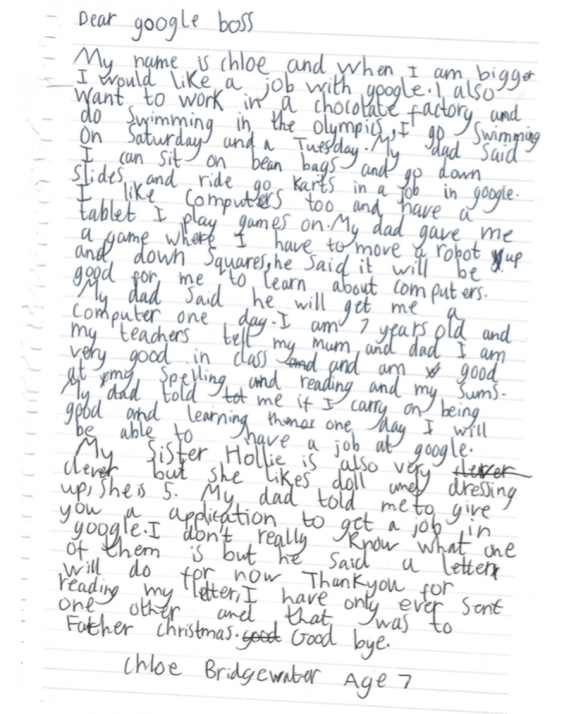 She even provided references: “My teachers tell my mum and dad that I am very good in class.”

“My dad told me that if I carry on being good and learning things that one day I will be able to have a job at Google,” Ms Bridgewater wrote, adding that she doesn’t know what a job application really is but hopes the letter will do for now: “Thank you for reading my letter, I have only ever sent one other and that was to Father Christmas”.

The seven-year old received a reply from Sundar Pichai himself, according to a LinkedIn post by her father Andy Bridgewater, that has gone viral.

“I think if you keep working hard and following your dreams, you can accomplish everything you set your mind to – from working at Google to swimming in the Olympics!” the Google chief executive wrote in the letter. 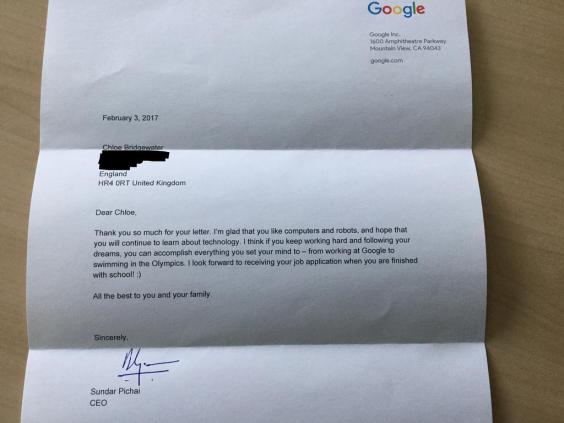 “I look forward to receiving your job application when you are finished with school!”

Mr Bridgewater explained that his daughter had lost confidence following a car accident a couple of years ago and that the letter was a much-needed confidence booster.

“She is now even more eager to do well at school and work for Google,” wrote Mr Bridgewater in the LinkedIn post.

Gadgets and tech news in pictures

“Can’t thank such a busy person enough to take time out to make a little girl’s dream become one step closer, although not sure she’s fully aware that it’ll take more than riding go karts and sleeping in pods to make it with Google!”