The sight of a gleaming railway snaking over an Alpine pass or hugging a lake has long inspired travellers, and both are well served by rail routes. This itinerary weaves from France through Switzerland to Austria, with spectacular views that will glue you to the train windows. 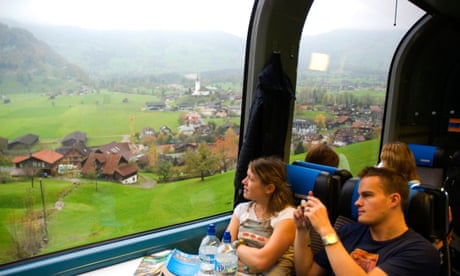 At Lausanne, be sure to take an early morning dip at Plage de Pully, watching the sun rise over the Alps as you swim. Heading onwards, skirt Lake Geneva to the beautiful town of Annecy, and take the chance to paddle a canoe to La Cuillère à Omble, a restaurant at the lake’s southern end, serving local freshwater fish.

Eastwards, at Chamonix, take the cable car to the top of the Aiguille du Midi for lunch at the self-service cafeteria of Le 3842 Restaurant, named for its lofty altitude. The journey onwards to Zermatt takes in magnificent scenery as the train hugs the mountainside. The stylish Swiss resort has wonderful hiking terrain, overlooked by the Matterhorn.

At Lucerne, explore the cobbled alleys of the Kornmarkt and dine at the intimate, candlelit Grottino 1313 restaurant. From there, plunge onwards through the Arlberg valley to St Anton, home to some exhilarating ebike routes, after which you can take a deserved dip at the Arlberg Well spa. Continue east to lakeside Zell am See, where activities include paddleboarding, wakeboarding and waterskiing. Three times a week the free Magic Lake Show lights up the water.

The route home stops at Innsbruck, with its space-age funicular and gondola to the top of the Nordkette, at 2,256 metres, with a jaw-dropping view. Explore the historic old town and the Imperial Palace, with its opulence of the Habsburg dynasty.

Next, travel to Bern, whose old town was declared a Unesco world heritage site in 1983. The city is also home to the Einstein Museum. Thun makes for a scenic 20-minute side trip. Fast TGV and Eurostar trains will then speed you home.

Journey times for all five itineraries can vary depending on date and time of departure. These recommendations are for faster connections, though not necessarily the fastest possible, and generally leaving in the morning on weekdays. We have prioritised trains that: require no reservation; are known to be very comfortable (such as RailJet); or have good on-board services (such as the ICE).

South to the Med

Rail pilgrimages to the Côte d’Azur began many years ago, when affluent Brits would venture south on the Train Bleu. This itinerary widens the route, spanning Barcelona and on through scenic French and Italian Riviera coastline to Rome, and then home via Switzerland.

On your first evening, in Toulouse, admire the grand architecture of the Place du Capitole before drinking in the nightlife in the Carmes neighbourhood, starting at Chez Vincente bodega. From here there’s a choice of routes to Barcelona: a fast train via Perpignan or Narbonne, or the longer but much more scenic regional train via Latour-de-Carol with a change at the Spanish border (no reservations needed or available, three connecting trains each day). Between Latour-de-Carol and Toulouse, sit on the left to get the best views. Once in the Catalan capital, check out the Museu d’Història de Barcelona. Sète is a bustling port town crisscrossed by canals, close to eight miles of unsung beaches. Give your legs a workout in Nice on the climb up Colline du Château, past waterfalls to a panorama over the city. 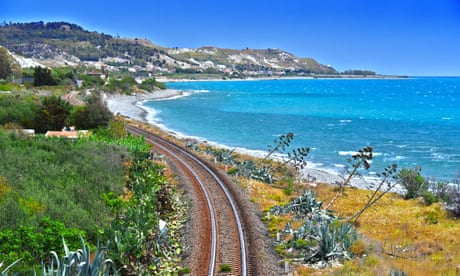 The sumptuous eastward journey takes you to Genoa, where the Unesco-listed, cobbled Via Garibaldi is home to the stunning Palazzo Bianco and Palazzo Rosso. From there, a Frecciarossa train will speed you south along the Ligurian coast to Rome, where the atmospheric Palatine Hill combines towering pine trees, majestic ruins and impressive views. Unrivalled granita di caffè can be found nearby at the Tazza d’Oro cafe.

Travel north via Milan to the enchanting town of Stresa, above Lake Maggiore. The train route onward to Zurich runs through incredible landscapes, and the Swiss city is dotted with more than 30 river and lakeside badis – outdoor pools – for swimming by day and lounging at night. In Cologne, celebrate your endeavours with a visit to the Chocolate Museum, and its three-metre-high chocolate fountain, before catching a homebound ICE train.

Scandinavia’s expanses just beg to be explored by train, and this route offers a ringside seat for some of its spectacular scenery. Before the fjords of Norway come the canals of Amsterdam, now linked easily by Eurostar from London. Hire a bike to explore highlights such as the masterpiece-filled Rijksmuseum and then lounge in the leafy Vondelpark, home to innovative cafes such as the saucer-shaped Blue Tea House (Blauwe Theehuis). 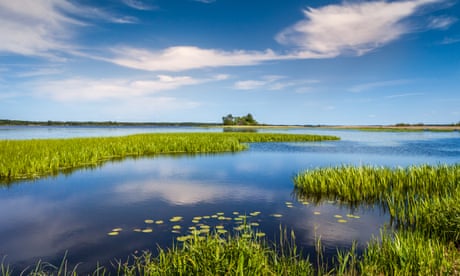 Next stop, at the historic port of Lübeck, climb the 50-metre spire of Petrikirche to gaze over the Baltic, before lunch at Cafe Niederegger: it does good sandwiches but its speciality is marzipan, which it even puts in the cappuccinos.

On the journey north, the train runs on to a ferry for the 50-minute crossing to Rødbyhavn in Denmark. Then it’s on to design and foodie heaven in Copenhagen, home to Designmuseum Danmark, with cutting-edge art, furniture, ceramic and digital design inspiration. In the evening, visit magical, fairy-lit Tivoli Gardens.

Next day, in Gothenburg, the Museum of Art has a huge collection of Nordic paintings and sculpture and, south of the centre, Slottsskogen park has meadows and forests, and a cafe.

In Oslo, visit the Vigeland Sculpture Park, with its 212 bronze and granite sculptures documenting the human condition. En route to Bergen, on the west coast, the train climbs to over 1,200 metres: you cross a mountain plateau called Hardangervidda and see waterfalls, cliffs and chasms. A sleeper takes you to Lillehammer, a pleasant lakeside town, and then it’s on to compact, wonderful Trondheim, founded in 977 AD. Take a boat trip to the island of Munkholmen – formerly a fort, monastery and second world war anti-aircraft gun station.

Back into Sweden, pause for lakeside relaxation in Östersund and visit Jamtli, its historic open-air museum. A must-visit in Stockholm is the Vasa Museum, home of a ship salvaged in 1628 and majestically preserved. For hipster vibes, scoot over to Södermalm, an island within the city, and seek Bar Agrikultur in Nytorget.

Speed back to Copenhagen and then on to Hamburg. Get up early for Altona fish market, which sells everything from sea creatures to fifth-hand junk – it’s a wholesome recovery after a big night out in the Reeperbahn district, perhaps. Break your journey home in charming Antwerp, whose central railway station is often voted the most beautiful in the world.

The legendary Orient Express route, all the way to Istanbul, is the stuff rail dreams are made of – a journey peppered with some of Europe’s most interesting cities

The trip begins with a night in Paris – with time to visit the romantic Palais-Royal gardens – before speeding by ICE train to Munich, with its vibrant, open-air Victuals Market. European sleeper trains can cover vast distances overnight, so sleep to Ljubljana and wake up in a city whose grand central streets are beautifully car-free. Head up Ljubljana castle and then dine out at the Cankarjevo nabrežje, a riverside walkway lined with eateries. 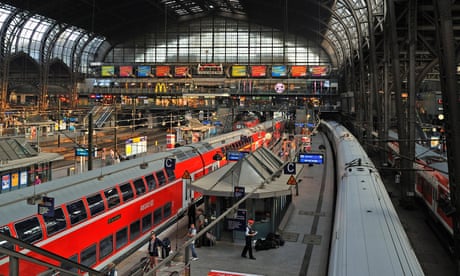 Your next train eastward is to Zagreb, with its beautiful Gornji Grad quarter, and Museum of Broken Relationships. Then sleep your way to Belgrade, a city brimming with culture and pedestrianised districts. Once in Niš, in southern Serbia, be sure to spend time at Holy Trinity cathedral, a curious mix of Byzantine, Islamic, Renaissance and baroque styles, replete with intricate frescoes.

Onwards overnight into Bulgaria, via Sofia, you’ll alight at Plovdiv, the oldest continually inhabited city in Europe. Eight thousand years after being founded, the city is 2019 European capital of culture. Don’t miss one of the best-preserved amphitheatres in the world. Seven hours by sleeper later, you’ll arrive in Istanbul. The historic centre, Sultanahmet, is a fabulous stew of wonders, such as the glorious Blue Mosque, with its 260 stained-glass windows.

On the return journey westwards, Veliko Târnovo in northern Bulgaria makes a good stop, not least for its wonderful handicraft market, Samovodska Charshiya. The train then heads north to Bucharest, home of the vast Palace of Parliament, the world’s largest legislative building. From there, it’s a long sleeper train journey to stunning Vienna, epicentre of cafe culture. Explore museums such as Haus der Musik with rooms dedicated to the Viennese composers, including Mozart, Beethoven and Strauss, and the sumptuous Schönbrunn Palace, where Mozart performed aged six.

Travel overnight to Venice, and seek out Gelateria Nico in Dorsoduro, which has been serving homemade ice-cream and its famous gianduiotto sundae since 1935. Just over two hours west by rail is Milan, whose magnificent Gothic Duomo took 500 years to build. See Da Vinci’s The Last Supper, a fitting end before the EuroNight sleeper carries you home.

A combination of high-speed daytime routes and sleeper trains makes a whirlwind rail tour of some of Europe’s finest cities eminently doable. This trip spans eight countries – a massive dollop of European culture in one tour. Set out to reach Bordeaux before the sun sets, to celebrate the start of your trip with a glass and some charcuterie at wine bar La Ligne Rouge, overlooking the Garonne river, before an evening stroll along the Pont de Pierre, which was commissioned by Napoleon.

Then it’s over the Spanish border to San Sebastián in the Basque country, for pintxos and the splendid seafront walk between La Concha and Ondarreta beaches. Next, venture south to Madrid, where restaurant Mercado de la Reina is the spot for generous portions of elaborate tapas. A fast AVE train will whisk you to Barcelona, to explore La Boqueria, the epic food market, and the architecture of the Gothic Quarter.

Travel back over the border to Lyon, to stroll around the fountained Place des Jacobins and visit the Musée Miniature et Cinéma, a must for film lovers.

In Turin, less than four hours away, cobbled Via Borga Dora has vintage clothes boutiques and a weekend flea market. Florence, spiritual – and physical – home of so much Renaissance art, needs no introduction. Tour wonders like the Duomo cathedral, and enjoy wine, pasta and other regional specialities at the Coquinarius restaurant.

The comfortable NightJet sleeper train network connects Florence with pretty Salzburg. A network of ice caves 50km away in Werfen is a worthwhile jaunt.

Prague, six hours’ ride to the north, is something of a Gothic fairytale. Check out picturesque park Petřínské Sady, Old Town Square and Prague Castle, which dates back to 870 AD.

Travel overnight to Kraków, a city that – as well as epic historical sites – has a buzzing bar scene and hip hangouts such as Forum Przestrzenie on the banks of the Vistula. Further north, in Warsaw, admire the view over the city from the 30th floor of the Palace of Culture and Science.

Time your overnight journey to Berlin to arrive on a Sunday, and head straight to Mauerpark for the bonkers outdoor karaoke – which attracts an audience of thousands from 3pm.

At your final stop, Brussels, try the mussels at family-owned Chez Leon, and a final night out at Café Delirium, with its 2,004 beers. Pop into the Chocolate Museum too, before being whisked back to London on the Eurostar.