Theresa May faces a major Budget backlash after ripping-up an election manifesto pledge to freeze National Insurance and instead hitting 2.5million self-employed people with an unexpected tax hike.

The rise unveiled by Chancellor Philip Hammond was branded a “rip off” for the country’s hardest workers, with critics – including Tories – warning it would hit low paid earners the hardest.

Many raised concern that the likes of cabbies or fast-food delivery drivers toiling in the “gig economy” for low rates, and with little choice but to accept self-employed status, would be the worst affected.

Mr Hammond’s aides desperately tried to deny the increase represented a broken promise, but the Tories’ 2015 manifesto clearly and repeatedly stated the party would not push up National Insurance contributions NICs.

The hit will be made all the more unpalatable by news that ex-chancellor George Osborne, in office when the NICs pledge was made, is now earning £650,000 a year working four days a month for investment firm Blackrock.

The NICs rise – squeezing an average of £240-a-year more from those affected – was contained in a Budget that hit the self-employed, entrepreneurs and shareholders for money to fund more social care and education schemes and help firms pay business rates.

The full extent of the damage to government finances from Justice Secretary Liz Truss’s change to compensation-payment rules was also revealed on Wednesday – a cost of almost £6bn which will have to be raised from extra borrowing.

The Chancellor tried to focus on the good news that the economy will grow faster than expected next year according to official forecasts, but could not hide a Brexit hit dragging growth down in the run up to 2020.

Speaking in the House of Commons, Mr Hammond attempted to frame the NICs rise as one needed for the sake of fairness.

“The lower National Insurance paid by the self-employed is forecast to cost our public finances over £5bn this year alone.”

After the Tories pledged to freeze NICs, VAT and income tax in their 2015 general election manifesto,  Ameet Gill, an aide to then-leader David Cameron, said the promise was “probably the dumbest economic policy that anyone could make”.

Nonetheless the party’s manifesto stated four times that the Tories would not increase NICs once in power again, in a move that may have helped convince millions to vote for the party.

Mr Hammond’s NICs change will now see some 2.5 million self-employed people hit – of which the bulk, 1.6 million, are basic-rate taxpayers – to raise more than £2bn over four years for Treasury coffers.

Confronted over the broken promise and asked if voters had been misled, Mr Hammond’s spokeswoman argued that legislation – published after the election – had made clear only those employed, and not self-employed, would have their NICs frozen.

She added that the change had been necessary so the Chancellor could create a “strong sustainable and fair tax system”.

Officials also claimed that previously announced change to NICs which will kick in at the same time as the tweak announced by Mr Hammond, will mitigate the impact so that only 1.6 million people will lose out overall.

Tory former minister Andrew Murrison MP said he had “concerns” adding that “it’s very important to ensure that we don’t disadvantage self-employed people” and calling for reassurance that “plumbers and electricians and plasterers” will not be disadvantaged.

Fellow Tory MP Tom Tugendhat also said: “I come from a political tradition that believes in small government, that believes in low taxes, that seeks to encourage entrepreneurship and enterprise. 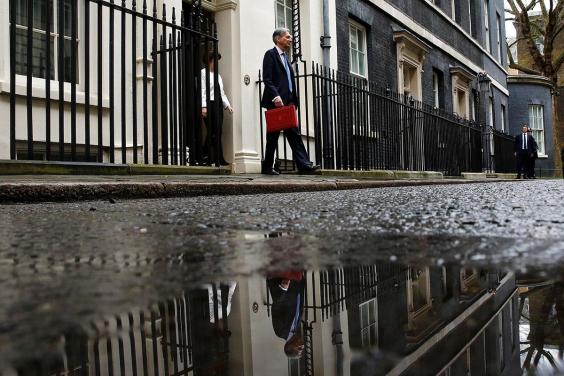 “And though indeed these are very minor figures that we’re seeing here – a percentage point here or there, two over two years – they speak to a tone that is not entirely helpful. In that I would urge a rethink, because the self-employed, the startup, the people who are taking risks and are carrying it themselves, those are the ones we should encourage.”

But the clear U-turn was leapt upon by political opponents and business groups alike with shadow Chancellor John McDonnell accusing Mr Hammond of trying to “claw £2bn in tax” from middle and low earners and vowing to oppose it.

Liberal Democrat Susan Kramer said: “This is a tax on builders, taxi drivers and window cleaners, some of Britain’s hardest working people.”

Chris Bryce, chief executive of the self-employed association IPSE, said: “If you are one of the hardworking self-employed people who face a significant increase on your tax bill, you might feel that the Chancellor has it in for you.”

Gerard Coyne, challenger for the post of general secretary of Unite the union branded it “a rip-off by a rotten government”, while entrepreneur Ed Molyneux called it “potentially devastating for freelancers and contractors”.

Mr Hammond also announced a tax-grab on business owners with a large reduction in the total amount of dividends, from £5,000 to £2,000, that they can receive from their firms before tax.

There was also an increase in VAT for people making phone calls from mainland Europe. While Mr Hammond stuck to plans to freeze fuel duty, there were hints in the small print of the Budget book of a potential tax rise to come for diesel car drivers.

Officials also reluctantly confirmed that changes to regulations relating to personal injury compensations, recently signed off by Ms Truss, would see the cash-strapped Government having to borrow almost £6bn over the Parliament to cover the cost of potential claims to the NHS.

A spokesman said: “It will be taken account in the [Office for Budget Responsibility’s] borrowing forecast.”

How Brexit affected Britain’s favourite foods from Weetabix to Marmite

Other spending commitments included a £435m package of help for firms to play business rates, some £2bn for social care, £330m to help hospitals run more efficiently, a one-off £120m fund to ease pressure in A & E departments, more than £1bn for new free schools already announced and a further £260m for repairs to existing schools.

Official documents again made clear, as they had done at the Autumn Statement, that all growth forecasts are still based on the Government not adopting a policy that will push immigration down to Theresa May’s stated goal of lowering it to the tens of thousands.