Arsenal are in contract negotiations with 10 players as Arsene Wenger tries to secure the future of his squad.

While the Alexis Sanchez and Mesut Ozil sagas rumble on, Wenger is also set to offer a new deal to Alex Oxlade-Chamberlain and five other players whose contracts expire in 2018. Santi Cazorla and Per Mertesacker, in their final years, will have options triggered for next season.

Wenger is facing the prospect of losing his two best players as Sanchez and Ozil demand record new contracts to stay at the Emirates. They both have 18 months left on their Arsenal deals and Wenger insisted at his press conference on Thursday morning that he would not sell them next summer, even if new deals could not be agreed.

Arsenal are no closer to agreeing new contracts with those two and there will have to be serious compromise to reach a deal, especially now that Sanchez has been offered three times his current salary to move to China. Wenger was reluctant to go into details on those two cases but did not sound enthusiastic, saying that the interests of the club had to come before those of any players.

Wenger has to look to the long-term, and that means trying to safeguard the futures of Arsenal players beyond their most famous pair. Two senior players, Cazorla and Mertesacker, have contracts which expire at the end of the season but the club are keen to retain both of them.

Cazorla remains one of their most important midfielders even though he turns 32 next week. He had ankle surgery on Thursday and will not return to the first team until February or March. “We start [talking] as well,” Wenger said of his contract, “and we will extend certainly with Santi Cazorla.” The club will exercise an option that will keep him at Arsenal for another year.

That option would take Cazorla up until 2018, and the club are considering doing the same in the case of Mertesacker. There are another six players whose contracts expire at the end of next season, less high profile than Ozil and Sanchez, and Arsenal are now starting to speak to them too. 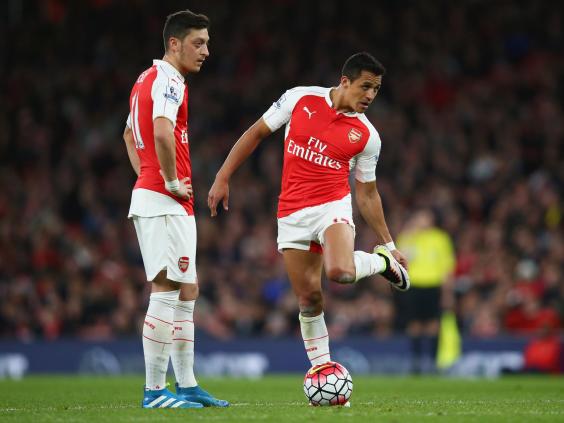 Top of the list is Alex Oxlade-Chamberlain, who Arsenal would have sold in the summer, but who has played his way back into Wenger’s plans with some strong performances recently. Wenger confirmed that the club have started speaking to Oxlade-Chamberlain about a new deal, as well as a few others.

“We work as well on Olivier Giroud, Jack Wilshere and on many players,” Wenger said. “There are six or seven cases at the moment but that is the usual case, it is every year like that. That explains to you why we have a lot of work to do but you are only interested in two cases!” Kieran Gibbs, Mathieu Debuchy and Wojciech Szczesny also have another 18 months left on their deals and while the club have initiated talks with them, the players may yet choose to run their deals down to earn lucrative contracts elsewhere.