When 23-year-old Brandon headed from Massachusetts to the Bay Area in mid-May to start work as a software engineer at Google, he opted out of settling into an overpriced San Francisco apartment. Instead, he moved into a 128-square-foot truck.

The idea started to formulate while Brandon — who asked to withhold his last name and photo to maintain his privacy on campus — was interning at Google last summer and living in the cheapest corporate housing offered: two bedrooms and four people for about $65 a night (roughly $2,000 a month), he told Business Insider.

“I realised I was paying an exorbitant amount of money for the apartment I was staying in — and I was almost never home,” he says. “It’s really hard to justify throwing that kind of money away. You’re essentially burning it — you’re not putting equity in anything and you’re not building it up for a future — and that was really hard for me to reconcile.” 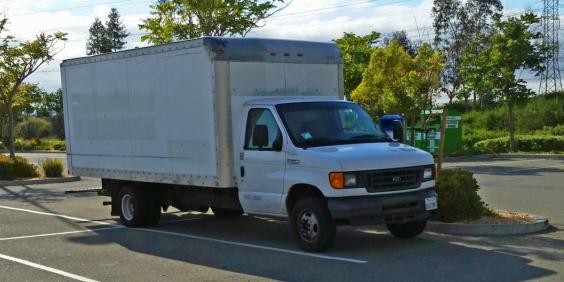 He started laying the groundwork for living out of a truck immediately, as he knew he’d be returning to work full time in San Francisco. A school year later, he was purchasing a 16-foot 2006 Ford with 157,000 miles on it.

It cost him an even $10,000, which he paid up front with his signing bonus. His projected “break-even point” is October 21, according to the live-updating “savings clock” he created on his blog, “Thoughts from Inside the Box.” 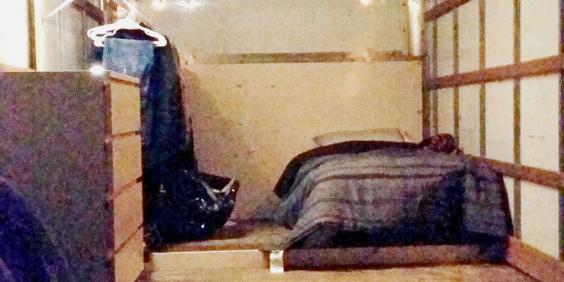 The minimalist space includes a bed, a coat rack, and a dresser (Brandon)

His one fixed cost is truck insurance — $121 a month — as he doesn’t use electricity, and his phone bill is handled by Google.

“I don’t actually own anything that needs to be plugged in,” he explains on his blog. “The truck has a few built-in overhead lights, and I have a motion-sensitive battery-powered lamp I use at night. I have a small battery pack that I charge up at work every few days, and I use that to charge my headphones and cellphone at night. My work laptop will last the night on a charge, and then I charge it at work.”

The space is sparse and minimal, he says: “The main things that I have are a bed, a dresser, and I built a coat rack to hang up my clothes. Besides that, and a few stuffed animals, there’s pretty much nothing in there.”

As for food and showers, that’s all on Google’s campus. He eats breakfast, lunch, and dinner at work and showers every morning in the corporate gym post-workout.

Few expenses mean significant savings: “I’m going for a target of saving about 90% of my after-tax income, and throwing that in student loans and investments,” he says.

He graduated with $22,434 worth of student loans, and has paid it down to $16,449 over the course of four months. “As a conservative estimate (and taking bonuses into consideration), I expect to have them paid off within the next six months, saving thousands of dollars over the standard 10-year, or even 20-year plans,” he says.

Additionally, saving on rent has allowed him to dine at nice restaurants and enjoy San Francisco more than if he opted for living in an apartment. 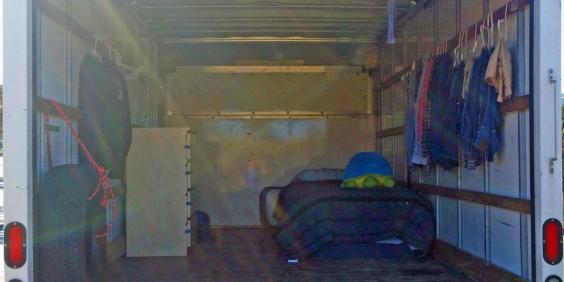 Inside the van (Brandon)

Another perk: His commute from a parking spot on the periphery of Google’s campus is a few seconds on foot, rather than a few hours sitting in San Francisco traffic.

Besides one friendly run-in with security after getting home late from a movie one evening, his truck lifestyle hasn’t been a problem. He was greeted by about 10 security personnel that night, but after showing them his corporate badge — and even offering to move the truck — they apologised for waking him and even said he had a “sweet setup.” Google did not respond to requests for comment.

The trade-off for such low-cost housing is space — and modern conveniences such as heat, air-conditioning, and a bathroom — but Brandon says the 128-square-foot space is larger than any of the bedrooms he’s ever lived in, and he’s usually only home to sleep.

The truck lifestyle provides more than financial freedom. It forces him outside of his comfort zone, an essential learning experience considering he hopes to travel the world.

“If I do plan on traveling the world, I’ll need to be comfortable with unconventional living situations, and this is certainly a good place to start,” he writes. “Plus, there is never going to be a better time in my life for me to try this. I’m young, flexible, and I don’t have to worry about this decision affecting anyone else in my life.”

He’s not sure how permanent life inside a box will be, so he hasn’t put a deadline on it. “It’s been five months so far, and I don’t see it stopping soon for any reason,” he says.