My dad grew up obsessed with small waterways. As a child he scoured streams, ponds and, perhaps inevitably for someone living on the edge of Manchester, canals. Soon he had tanks filled with dozens of small creatures in his bedroom. This included wildlife that was plentiful in the 1950s but that I’ve never seen: shellfish such as freshwater limpets, invertebrates such as the charismatic water scorpion. 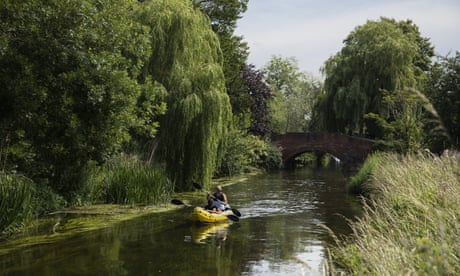 Horse leeches would escape and wander the house at night, while his swan mussels required large tanks of mud instead of water. Family connections took him to the Macclesfield canal at Higher Poynton and the Lancaster canal, with its huge Lake District views. Neither had boat traffic at that time, so were undisturbed and crystal clear, with their fish and crustaceans visible.

Like so many ecological settings, freshwater habitats were damaged in the late 20th century. But recent years have seen many waterways recover. Since around 2000, the canals of Birmingham, where I now work, have brought otters to the centre of the city. Whenever I’ve been on pub crawls by kayak there, I’ve kept my nose alert for the distinctive whiff of otter spraint around city-centre bars.

Until lockdown, I’d mostly ignored my dad’s freshwater fascination, beguiled instead by sealife and shorelines. My last book involved a kayak journey along all the Atlantic coasts of Britain and Ireland, and for my 2020 writing project I was to have taken my boat to the Faroes, Greenland and Newfoundland. But, like many people, I haven’t left my home region even once in the past year.

Sometimes I think weeks alone at sea were excellent preparation for the solitude of lockdown, teaching me comfort in my own company. But there are ways, too, in which that year was the worst preparation possible: I learned that there’s little I find more mentally challenging than returning from long spells outdoors, especially on the water, to a life contained by four suburban walls and deprived of daylong sunlight. I’ve sought a solution in localised forms of adventure; for me, that has meant throwing a kayak designed for ocean swell on to the kinds of flat waterways my dad grew up exploring.

The canal network is a unique product of history. The past 300 years have seen water banished from inland areas of the British Isles on a dramatic scale. Wetlands have been drained, fords replaced with bridges, and streams forced into concrete sluices and pipes. But the early stages of industrialisation were different. Large loads of coal and iron had to be carried through the shifting geographies of urbanising Britain before steam-powered travel was an option, and water was the only means for adapting old methods to new needs, since a single horse could pull 30 tons on water with the same effort as one ton on land. So, until the railway boom of the 1830s, waterways were built prodigiously, with thousands of miles of canal cut into the landscape.

As a result, many regions are still veined with interlinked networks of navigable water, including dozens of aqueducts and hundreds of packhorse bridges, characterful 18th-century features in modern surroundings. Those canals now cut through 21st-century cities, bringing water and wildlife to town centres that have otherwise had their dampness dismissed. Their junctions with rivers mean they link inland suburbs with the sea, so that, with a boat and enough packed lunches, there are (in theory at least) no uncrossable barriers between Nottingham and New York.

In northern England and Scotland, canals link west coast to east in journeys that can be paddled in two to four days. The old truism that Birmingham has far more miles of canals than Venice reveals characteristics not just of one industrial city, but of much of Britain.

There’s a sense of freedom when confronted with so huge an array of simple left and right turns through forests, fields and even tunnels into hills. A kayaker is little different from an 18th-century packhorse: able to go further with less effort than a walker or runner on roads or footpaths. With practice, fair weather, and a stretch without too many locks, it’s possible to travel more than 70 miles a day. Many of those I’ve met kayaking the Midlands (and I’m convinced a small boat is as fine a conversation starter as a puppy) are wheelchair users, or have persistent leg injuries, and a canoe or kayak is the perfect alternative to land travel.

When I hit the water from home, it takes 10 minutes to leave suburban spaces for overgrown banks of sloes, blackberries and damsons that can be picked only from the water. Views take in Droitwich Spa, from where a worthy Victorian industrialist, the “Salt King” John Corbett, built new canal infrastructure and also the house I live in. If I take my smallest, flat-bottomed boat I can navigate the tiny River Salwarpe too, and make a round-trip back home. Or I can choose to either head west, taking to the Severn straight away, or continue south and meet the river among the medieval bridges and quays of Worcester.

The Severn is perhaps the most dynamic waterway in Britain. Once, before lockdown, I kayaked all the way to Barry Island and found myself confounded by the estuary’s tides. A long adventure ended in my having to call for an early lift home, like a naughty schoolchild.

Further north, the Severn is prone to winter floods that make meadows, paths and roads into waterways. Swathes of drained land are returned from sheep and cattle fields to heron and otter haunts, as if historic landscapes were momentarily restored. Cruising the floods in snow over the past few weeks has felt preternatural, with the silence broken only by disturbed snipe and sandpipers and the stillness only by buzzards and kestrels lifting from trees. The water has frozen at times. Then, the thickness of ice has determined whether the kayak cuts through with abrupt rending that echoes for miles, or with a quiet creaking and cracking that’s constant and gentle. Winter storms have pummelled the water so hard that the canal has seemed like ocean: leaping about until I’m drenched from above and below. 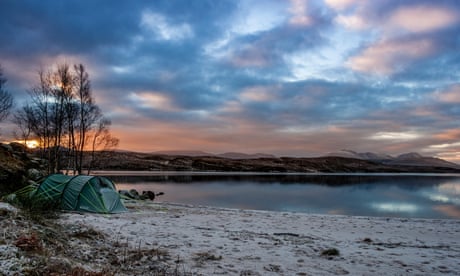 Cold play: how to enjoy UK outdoor activities – even in winter
Read more

Each UK lockdown has felt different. In the first, waterways were closed, so I re-dug an old garden pond and, to my surprise, had dozens of breeding newts within weeks. Ducks and ducklings wandered through from the canal, providing the purest form of lockdown entertainment. When those restrictions ended, I got straight back on the water, and took my exercise through travel to the Salwarpe and Severn. But the narrowboats stayed still. For the first time, I had something of dad’s old experience of canals. The water didn’t fully clear, but was far more translucent. I saw several things I’d never seen before: huge swan mussels half a mile from my house and a kingfisher hunting in canal water. I met a grass snake near the supermarket in Droitwich, and watched insects such as water boatmen take off from the surface at dusk.

I still miss the sea, and have a kind of love for a basking shark or minke whale that even a freshwater stick insect could never rival. But giving up travel by both sea and road to take to the wet narrow lanes across this landscape has been a voyage of discovery fitting for our localised times, and has had as much to offer as any ocean crossing.