If you are on the plane taking off from Danang airport in Vietnam, look through the window on your right – between the departure building and the yellow wall separating the airport from densely populated neighbourhoods – and you will see an ugly scar on the already not very pretty face of the Vietnam War.

This is where barrels of Agent Orange were kept in the airport by the US military. Now, more than 40 years later, the spot is finally being decontaminated. When covering an anniversary, it’s easy to fall into the trap of a “before and after” cliché or, even worse, to try to do something different but irrelevant. Even so, I wanted to do a story on the legacy of Agent Orange. There were several raised eyebrows around me, as colleagues asked: couldn’t I find something new instead of retelling a story told over and over already?

I can’t say where and when I heard it but I remember the advice well: no matter how many times the story has been done and how many people have done it, do it as if you are the first and only one to witness it. I listened to this advice so many times in the past and I listened to it now.

Such assignments have rules, among the most important being the longer you spend in the unknown, the more chance you have of getting strong pictures.

So a Vietnamese colleague and I set off to travel around Vietnam, a country stretching more than 1,500 kilometres from north to south, with a great many people still affected by Agent Orange. 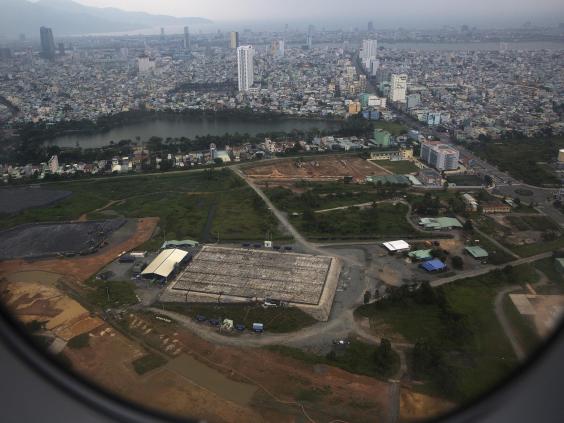 The Vietnam Association of Victims of Agent Orange/Dioxin (VAVA) told Reuters that more than 4.8 million people in Vietnam have been exposed to the herbicide and over 3 million of them have been suffering from deadly diseases.

But soon after I started taking pictures and talking to victims and their relatives, I realised I would need to think again about how to do this story. My immediate and natural reaction was to get closer, almost into the face of a victim, to show what has happened to human bodies.

A forensic photography approach, almost. In a hospice outside Hanoi, after a few strong portraits of a kid born with no eyes and other victims whose bodies are horribly twisted, my original plan felt wrong. The faces and eyes in the pictures hurt; the focus is there but I may be missing things around, possibly even the story itself.

I wanted to put it all in the context of today’s Vietnam, 42 years on. To see victims of the second and third generations, where and how they live. To learn why children and grandchildren of people affected are still being born with disabilities, to find out if people know about the dangers, and if so when did they found out.

And to take pictures of all that.

As we got closer to the former front lines travelling from the north, the number of cases increased. We kept in touch with VAVA, the main association helping victims, and they gave us much needed information, including the number of victims and where they live.

Throughout the assignment, VAVA and other local officials together with family members confirmed that the health conditions of people we met and photographed are linked to Agent Orange as their parents or grandparents were exposed to it.

In yet another village, Le Van Dan, an ex South Vietnamese soldier, wearing a worn-out military jacket of the communists, his former enemy force, told me how he was sprayed directly from the U.S. planes not far from his home today.

As the tough man spoke through broken teeth, two of his grandsons in a room behind the kitchen were given milk provided by a government aid agency. Both kids were born severely disabled, doctors say because of Agent Orange.

In a small village in Thai Binh province, in a cold room empty of any furniture, Doan Thi Hong Gam shrank under a light blue blanket. The room’s dirty walls suggest anger and some sort of struggle. She’s been kept in isolation since the age of sixteen because of her aggressiveness and severe mental problems. She is 38 now.

I took pictures of the poor woman for about 15 minutes. They were possibly the strongest frames I have taken in a long time. Her father, a former soldier lying in the bed in a room next to hers, also very sick, was exposed to Agent Orange during the war.

The legacy of Agent Orange

Then another village and another picture. On a hill above his home, former soldier Do Duc Diu showed me the cemetery he built for his twelve children, who all died soon after being born disabled. There are a few extra plots next to the existing graves for where his daughters, who are still alive but very sick, will be buried.

The man was also a North Vietnamese soldier exposed to the toxic defoliant. For more than twenty years he and his wife were trying to have a healthy child. One by one their babies were dying and they thought it was a curse or bad luck, so they prayed and visited spiritual leaders but that didn’t help.

They found out about Agent Orange only after their fifteenth child was born, also sick. I took a picture of the youngest daughter. It was not an easy thing to do.

Village after village, strong pictures and even stronger stories emerge. My camera stayed at a distance. I shot through mosquito nets and against the light, I shot details and reflections. We took many notes trying not to miss any important details needed to build an accurate picture. Then we drove further south.

Back in Danang, next to its international airport, we visited a young couple who have lived and worked there since late 1990s. When they first moved there the man used to go fishing, collecting snails and vegetables to bring home to eat. 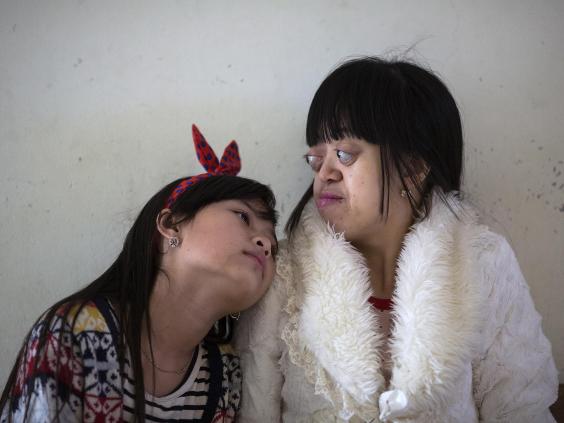 Nguyen Thi Van Long (R) and her best friend Dinh Thi Huong, who is deaf and mute, spend time together at Friendship village, a hospice for Agent Orange victims outside Hanoi (Reuters)

The family was poor and all food was welcomed. What he didn’t know was that Agent Orange, which used to be stored nearby, had contaminated the waters and everything around the lake situated next to the airstrip.

His daughter was born sick in 2000 and died aged seven. Their son was born in 2008, also sick with the same symptoms as his late sister. I took pictures and then we drove the family to the hospital for the boy’s blood transfusion. The blind and very sick boy held my finger and later blew a kiss into the emptiness. I saw it from afar as I walked away.

The United States stopped spraying Agent Orange in 1971 and the war ended in 1975. Twenty years later, some people from villages and cities didn’t know all about it. More than 40 years later, today, children and their parents still suffer and a large part of the story remains untold. Agent Orange is one big tragedy made of many small tragedies, all man made.

There is not much I can do about it with my pictures except to retell the story, despite all the raised eyebrows. The pictures I took are not about the before and after, they are all about now. As for how poorly we read history and stories from the past, I’m afraid that is about our future, too.