Wherever the hell we are it feels light years away from 2017. A mob of bearded Vikings – all Middle Earth helmets, sheepskin capes and squelching boots – bound past, bellowing an unsettling version of Elvis Presley’s “Burning Love” that echoes through the rain-lashed streets.

Smelling like a pack of wet dogs, they hare after their leader or Guizer Jarl, Lyall Gair, a bear of a man with a bird-like Hawkmen hat reminiscent of Brian Blessed in Flash Gordon, and a beard so wild it may well hide debris from his breakfast.

They are here to pull a spectacular Viking galley through the streets before it is set ablaze by 1,000 torch-carrying men dressed in drag. Weirder still, they’ve been drinking whisky since dawn, with their night-long party only set to finish the following afternoon. And, far worse, I’ve been asked to join them.

You do not have access to view this Atom.

Even for the seasoned Shetlander, there are many things that don’t make sense about Up Helly Aa, the annual Viking fire festival in the capital of Lerwick that marks the passing of the darkest days of midwinter.

The crush of men squeezed into boob tubes and lace stockings. The Celtic drag queens, Popes and Gary Glitters armed with large flaming torches. The sky on fire with paraffin smoke. The fancy dress mice staggering around the harbour the next morning. But the most glaring oddity is that it happens at all. Anywhere else in Britain, I remind myself, this kind of drunken revelry and pyromania would get you arrested. 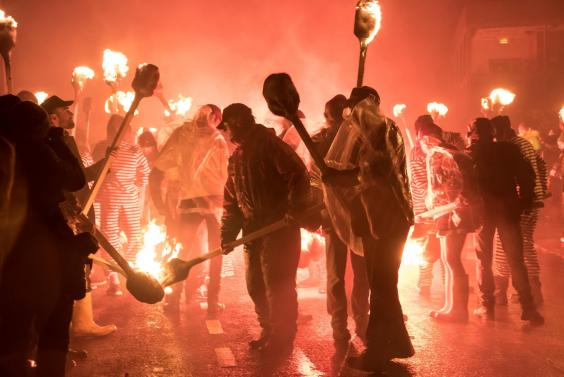 At Up Helly Aa, pyromania is encouraged (Visit Scotland)

For its part, the 58-strong Jarl squad is a group of gentlemen that know a thing or two about prolonged debauchery, even if they’re the sweetest souls you could ever meet. Their duty, as stipulated by the Up Helly Aa Bill, which I find pinned to the Market Cross at 6.30am on the day of the procession, is to celebrate the Shetland Isles’ Norse heritage in a day-long ritual. Now Europe’s largest fire festival, the gathering draws thousands to a part of Scotland that – for most people – exists beyond the imagination; that Game of Thrones-like wilderness north of the wall.

But once here, many are instantly smitten with the Shetland Isles. The North Sea’s stubborn winds that cut across the grain of the islands have long blown away the trees, making it a barren place of bald hillocks and fragile clifftops that seem to disintegrate into the sea. 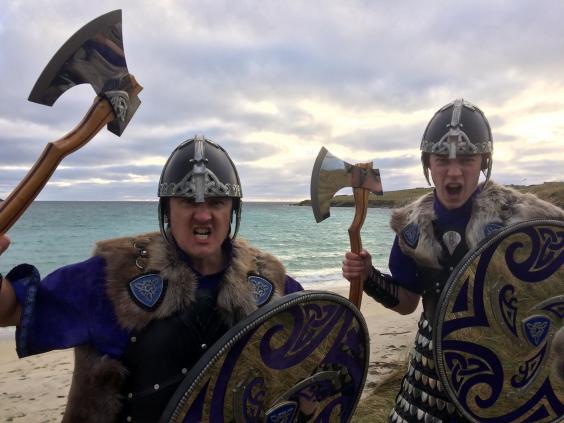 The island’s beauty opens up as you travel north, first from Sumburgh Airport, then to the island’s forgotten-by-time capital Lerwick. Finally, during Up Helly Aa, the road leads you down into a bizarre place full of burly men you’d hardly like to meet down a dark alley.

Up close, such characters appear as if inflated by a bicycle pump. They have fuzzed-up Hagrid-like faces that haven’t seen sunlight in many months, even years, with some beards having an almost moonlike pull. One such veteran is Michael Johnson, a joiner, who later tells me – while downing a pint of cider – that he had his first nip of whisky at 8.30am. “That’s just the way it is,” he says with a shrug. 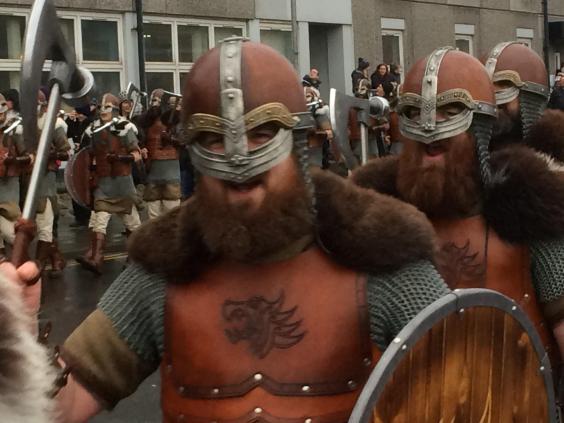 Earlier, I meet the great chieftain of the parade Lyall Gair, who has been waiting nearly 15 years for his role of a lifetime. “It’s the fowk’s spirits that’ll haud me tegither,” he says, tightening a leather tunic decorated with the crest of a Norse wolf. “That’ll cairy me tae the end. That and anither drink.”

It certainly won’t be the weather. It’s an end-of-the-world kind of day, the brothy mist so thick you could chew on it. By noon, it’s worse, but the drink is already flowing at the British Legion and at the Mareel Arts Centre and nobody seems to care. The prospect of the northern sky aflame with sparks and cinders is too good a sight to miss. 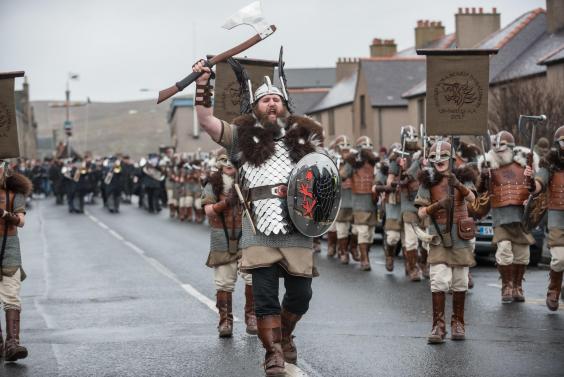 Vikings march through the streets of the Shetlands‘ capital (Visit Scotland)

At the Shetland Museum, I learn, there’s good reason for all this pyromania. The residents of the island’s former capital Scalloway razed Lerwick to the ground twice in the early 17th century. Nine centuries earlier than that, the Vikings arrived to pillage and burn after landing from Norway. Since then, Up Helly Aa has morphed from the Victorian tradition of rolling burning tar barrels through Lerwick’s narrow streets into today’s all-out camp weirdness.

Half an hour later, things haven’t exactly panned out as Gair would have wished. “We’ve lost the Jarl,” says one of his squad, trying to restore calm with a fist-pumping sing-a-long to The Proclaimers’ “I’m On My Way”. “We’re nae sure whaur he is, but he’ll be back.” The guess on the lips of the museum-goers is that he’s been waylaid by a pint of Thistly Cross Cider. 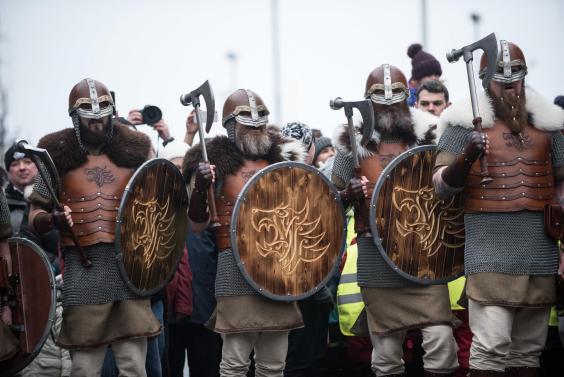 At 7.15pm, the parade finally begins and the city falls into darkness, with wave after wave of torches steeped in paraffin powering through the dark streets. The rain is falling hard, but the sight of 1,000 men in lycra, hula skirts and heaving bosoms marching onwards works the crowd into a frenzy. From outside the square, I see the galley’s dragon-shaped prow, like that of a raven about to attack, burst to life in flames. With this much paraffin in the air, it’s not just the alcohol that makes me feel as though I might actually levitate. 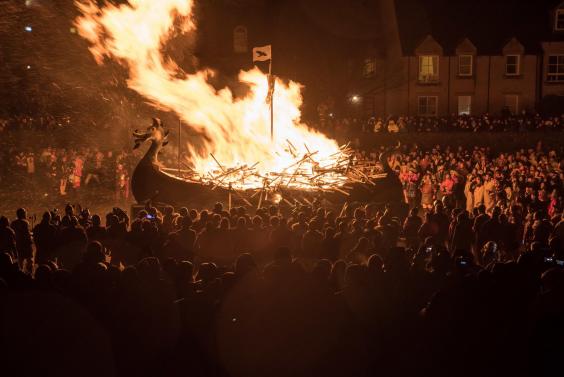 Soon the hours begin to blur from too much Shetland gin, and I find myself in one of Lerwick’s all-night party halls following the procession. Here I stagger into Steve Henry, a former Jarl squad member dressed as a ludicrous cross between Michael Jackson and Bubbles the Chimp. “We’re like rock stars, ken, but in oor ain lifetime,” he slurs.

Putting his arm around me, we watch as group after group of half-naked men appear in the hall to perform bizarre routines and folk dances. In truth, it is more a transvestite carnival than a Viking gala, but the wives and girlfriends lap it up. All the time, they watch on laughing, aghast at their partners, but equally glad they’re not part of the spectacle. 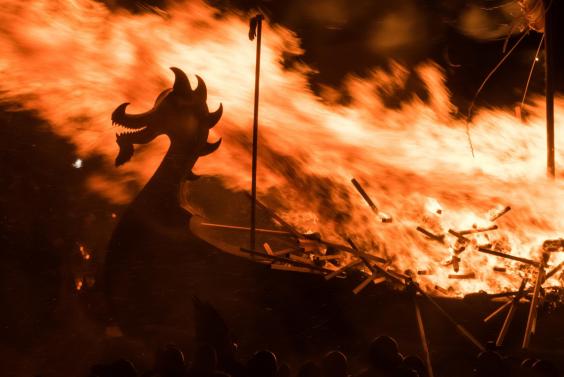 It’s getting late and all the visitors are tiring. Or at least I am. I want to fall into bed, but the Shetlanders are still clutching their Tennent’s cans like prized goblets, goading me on to stay. There is plenty more booze to be pounded and by Odin’s beard it’ll be gone by tomorrow.

A night at Up Helly Aa, I think, while stumbling home in the darkest hours of the night, has taken me to a strange place. Even if I enlist all the right pharmaceuticals, it’s one I may never reach again.

Fly to Sumburgh Airport from Glasgow, Edinburgh, Aberdeen and Inverness with Flybe (flybe.com).

Six miles from Lerwick, the family-run Scalloway Hotel (scallowayhotel.com) has 23 en-suite rooms and a fabulous restaurant specialising in boat-fresh Shetland seafood. Doubles from £130 per night, including breakfast.