They seized the regional government’s headquarters and prosecutor’s office before attacking the police station, reportedly with automatic rifles.

Earlier, Russia criticised sanctions imposed by the US and EU over Moscow’s alleged actions to destabilise Ukraine.

The EU, he added, had proved that it was “under Washington’s thumb”.

Russia’s Deputy Prime Minister Dmitry Rogozin meanwhile warned that if the sanctions affected its rocket-building sector, US astronauts on the International Space Station (ISS) might be “exposed”.

In other developments on Tuesday:

Mr Ryabkov also stressed that Russia had no intention of invading eastern Ukraine, where pro-Russia activists have seized government buildings in more than a dozen towns and cities.

Until now, only the local office of the State Security Service (SBU) in Luhansk, a city of 465,000 people less than 30km (20 miles) from the Russian border, had been targeted. 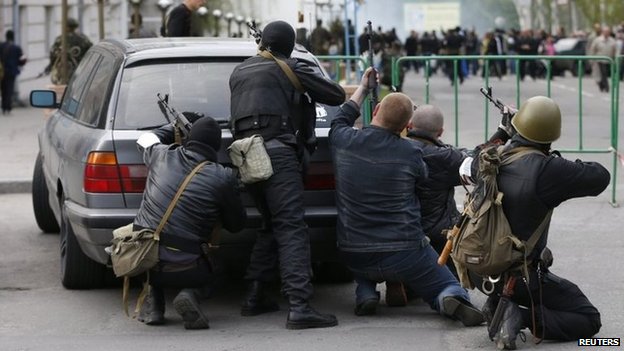 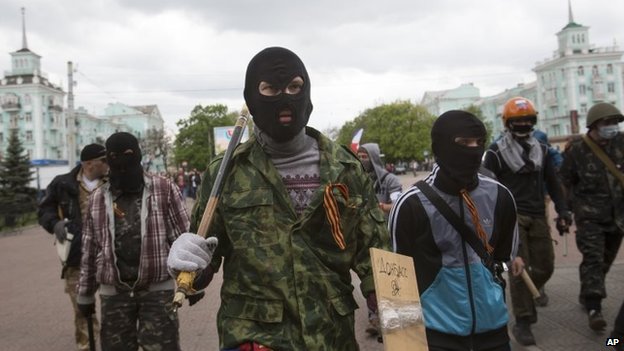 A small group broke windows to gain access to the building, which was not protected 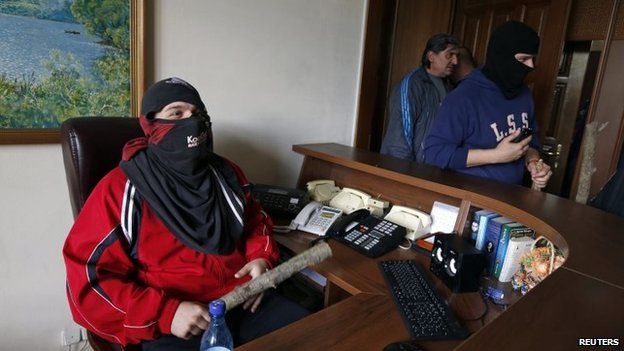 Once inside, they opened the building’s main entrance to allow in demonstrators gathered outside 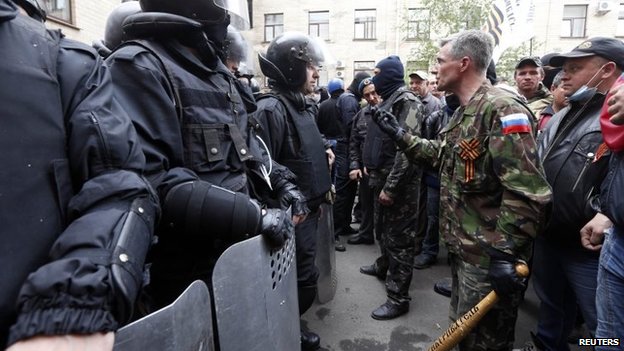 Inside the courtyard, the activists found dozens of security personnel in riot gear 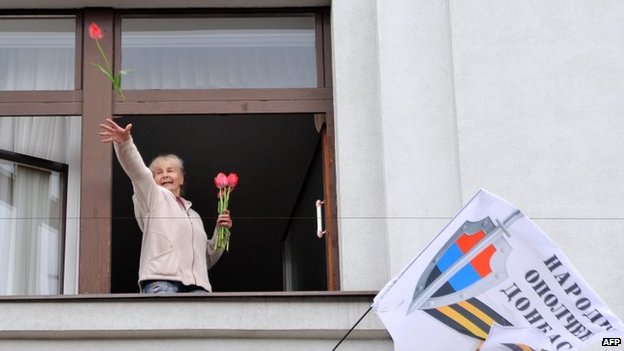 But on Tuesday afternoon, hundreds of people gathered outside the headquarters of the regional government to demand a referendum on granting greater autonomy to the east.

A group of men armed with sticks and metal bars broke into the building, whose entrances were not protected by police. They then pulled down the Ukrainian flag flying from the roof and replaced it with a Russian one, and opened the main entrance to the crowd.

Inside the building’s courtyard, they found security personnel in riot gear massed in a defensive position. There was a stand-off, but no violence.

Later, crowds of pro-Russia activists overran the building housing the prosecutor’s office before attacking the headquarters of the interior ministry’s police force.

The Reuters news agency said about 20 gunmen opened fire at the police station with automatic weapons and threw stun grenades in an effort to force the officers inside to surrender.

A BBC correspondent in the city says the pro-Russia activists also went into a regional television station, but decided not to take it over after they were allowed to make a live broadcast.

Following the takeovers, Ukraine’s interim President, Olexander Turchynov, demanded the dismissal of the police chiefs in Luhansk and the other eastern city of Donetsk.

“The overwhelming majority of law enforcement bodies in the east are incapable of fulfilling their duty to defend our citizens,” he said.

Eastern Ukraine, which has a large Russian-speaking population, was a stronghold for former President Yanukovych before he was overthrown by protesters in February.

The interim government has rejected the pro-Russian activists’ demands for greater autonomy, fearing they could lead to the break-up of the country or more regions being annexed by Russia, as happened with Crimea last month.

Pro-Russian activists continue to detain some 40 people, including seven military observers linked to the Organisation for Security and Co-operation in Europe (OSCE) seized last week.

The self-styled “mayor” of the town of Sloviansk, where the observers are being held, has said he will discuss their release only if the EU drops sanctions against separatist leaders.

On Tuesday, the EU published a fresh list of 15 individuals facing travel banks and asset freezes.