The blizzard hit me about two hours after I’d started climbing the mountain. A furious wind drove through the pine trees, making their trunks writhe and groan, and an icy spindrift erased all trace of the landscape below: the foothills of the Velebit mountains and Croatia’s many-islanded Adriatic coastinwinter.

From lower ground, the snow had looked like a decorative touch to the mountaintops, and stupidly I had never expected to find myself inside it. But now I was in the midst of a snowstorm, shocked by the violence of the air, watching the trail ahead of me rapidly vanishing into whiteness.

Ironically, wind was the reason I was climbing this mountain. For months I had been following the invisible pathways of Europe’s named winds – northern England’s Helm, Switzerland’s Föhn, France’s Mistral and others – to write about how they affect peoples, landscapes and cultures. I had spent the previous fortnight walking from north-east Italy through Slovenia and Croatia in search of the mighty Bora, the freezing, gale-force northerly that sweeps this coastline, ripping up olive trees by their roots and tearing tiles off rooftops.

I hadn’t found the Bora yet, but I’d heard that on this mountain’s summit was a weather station called Zavižan, and I wanted to consult its resident meteorologist. I may have been looking for wind as part of my research, but not this wind, a raging bully that threatened to end my journey at any minute. Just as I was considering turning back to the safety of lower ground, I heard the sound of huffing breath approaching through the snow.

“Tomaš,” said a beaming, purple-faced man in his 60s, whipping off one frosted glove to pump my hand.

“You are going to Zavižan? We will not be alone. Behind me are 20 people. Tonight will be a great feast, too much wine.”

And then he said something I’ll never forget: “There are no evil people on mountains.”

No evil people, just evil weather. Past the treeline, it got worse. In the blinding whiteout that lay above, I followed Tomaš’s tracks through the snow, placing my boots inside his bootprints, which is a peculiarly intimate way to get to know a stranger.

He walked at a relentless pace, never stopping to look back, and it was all I could do to keep his silhouette in sight as he pounded through the murk to the summit of Zavižan. Half an hour later we were drying ourselves by a wood-burning stove inside the weather station, which also functioned as a shelter for climbers. Without further ado he pulled out bread, cheese and a battered plastic bottle of his rough but delicious homemade wine.

During the night that followed, the feasting and drinking gave way to folksongs, dancing … and legends of the Bora

Shortly afterwards, the room was packed. Tomaš’s friends had arrived, along with another climbing party, and the table was piled with pickles, meat and homemade alcohol. During the long night that followed, the feasting and drinking gave way to folksongs, drunken dancing, nostalgic anthems about communist Yugoslavia and, in the small hours, legends of the Bora, which I scribbled down in my notebook in increasingly illegible handwriting. The grumpy meteorologist seemed obscurely suspicious of me, and in the end was the only one who didn’t want to talk about the weather.

In the morning, Tomaš and I set out down the mountain alone. My plan was to follow the Velebit range south for the next two days, sleeping in other huts on the way, but overnight the weather conditions had grown even worse. A bellowing white cloud whipped around the mountaintop, obliterating everything, and my new friend persuaded me to follow him back to the lower world.

Once below the treeline, however, we came across a smaller trail that seemed to lead in the same direction by a more sheltered route.

“I will walk with you for 30 minutes,” Tomaš said, sceptically.

“If it looks possible you can go on. If not, we both turn back.”

And with those words he charged ahead even faster than before, crashing through snowdrifts and leaping over rocks and tangled roots. Half an hour went by, an hour, two hours, until, abruptly, he stopped. “The path is good,” he said. “I think you will make it.” 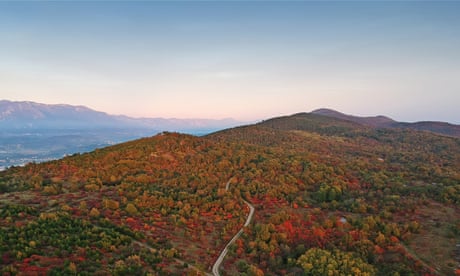 Later, it occurred to me that perhaps his ferocious pace was a test to make sure I was fit enough. But I still had a long way to walk, and our farewell was brief.

His confidence in my abilities turned out to be misplaced: I got lost almost immediately, was plunged into a blizzard again, and reached the next hut cold, wet and exhausted as darkness was falling. But there are no evil people on mountains. And at least I had some wine.

Nick Hunt is the author of Where the Wild Winds Are: Walking Europe’s Winds from the Pennines to Provence (Nicholas Brealey/Hachette), available to buy at Guardian Bookshop