Theresa May’s welfare cuts will help push almost one million more children into relative poverty by 2022 and two thirds of those affected will live in working households, according to the latest projections from the Institute for Fiscal Studies.

The findings will heap pressure on the Prime Minister ahead of next week’s Budget to live up to her claim that the Conservatives are the “party of the workers” and to reverse some of the welfare cuts planned over the rest of this Parliament.

The IFS projects that the number of children in relative poverty, defined as those in a family earning less than 60 per cent of median incomes after housing costs, will rise by 900,000 to 5.1 million by 2021-22.

That is almost 36 per cent of all children.

The think tank also projects that the number of children in absolute poverty, those earning less than 60 per cent of 2010-11 real median incomes, will rise by 600,000.

Child poverty campaigners have condemned the findings as representing a “burning injustice” and demanded an urgent plan from the Government, specifically urging the Prime Minister and Chancellor to reform the Universal Credit system.

The IFS expects this “significant” rise in child poverty because of the cuts to working-age welfare benefits introduced by George Osborne after the 2015 general election which will bite hard into living standards of the poorest families in the country.

Another contributor is the expectation that poorer families will benefit less from the average rise in workers’ wages expected over the next five years since a smaller share of their income comes from employment.

Around half of the projected increase in the numbers of children in relative poverty is ascribed by the IFS to the Government’s cuts and all of the increase in absolute poverty is due to ministers’ fiscal decisions.

Imran Hussain, director of policy for the Child Poverty Action Group, said: “There is no greater burning injustice than children being forced into poverty as a result of government policy.

“Decisions which have made real-terms cuts to basic benefits for children, the low paid and the disabled have led to us rationing our decency as a country. At the same time, the better off have been the overwhelmingly beneficiaries of increases to personal tax allowances worth billions.

“We urgently need a national plan to tackle child poverty. Pretending poverty isn’t about money is not a plan. A vital first step would be for the broken promises on Universal Credit to be made good.” 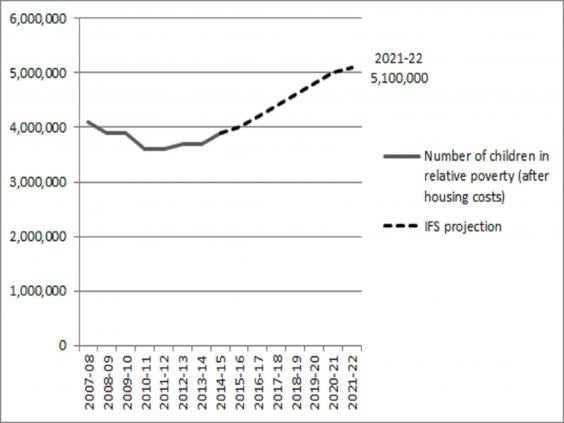 Campbell Robb, chief executive of the Joseph Rowntree Foundation, said: “These troubling forecasts show millions of families across the country are teetering on a precipice, with 400,000 pensioners and over one million more children likely to fall into poverty and suffer the very real and awful consequences that brings if things do not change.

“One of the biggest drivers of the rise in child poverty is policy choices, which is why it is essential that the Prime Minister and Chancellor use the upcoming Budget to put in place measures to stop this happening. An excellent start would be to ensure families can keep more of their earnings under the Universal Credit.”

The Child Poverty Act, introduced by Labour with cross-party support in 2010, committed the Government to reduce the proportion of children living in relative poverty, before housing costs, to less than 10 per cent by 2020-21.

It also required ministers to reduce the absolute child poverty rate by that date to less than 5 per cent.

According to the IFS’s latest projections, both of those targets will be spectacularly missed, with the relative child poverty rate, before housing costs, forecast to shoot up to 26.4 per cent in 2020-21. The absolute poverty rate is expected to rise to 20.7 per cent in the same period.

However, the Welfare Reform and Work Act, passed last year by the Conservatives, scrapped those targets and instead merely introduced a duty on ministers instead to report annually on some “life chances” indicators.

These relate to the number of children in workless households and their GCSE success. 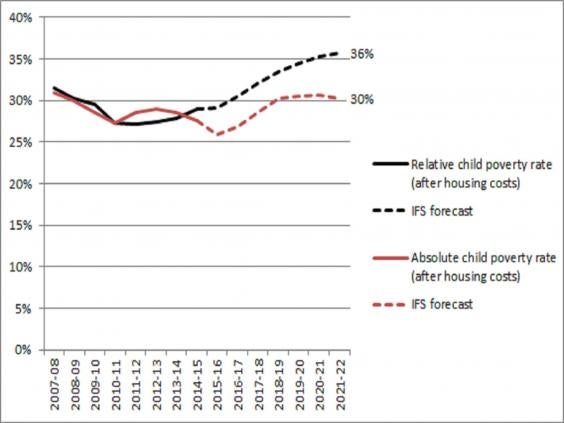 A Treasury spokesperson highlighted other moves by the Conservatives to help working families such as a hike in the minimum wage, progressive increases in the lower rate income tax threshold and additional free child care for working parents.

Last autumn the Chancellor, Philip Hammond, ditched the objective of his predecessor, Mr Osborne, to wipe out the entire deficit by 2019-20, avoiding the need to ratchet austerity up further.

But the Government did not reverse the £12bn of working age welfare cuts already set in train by Mr Osborne in his 2015 post-election Budget, which included a cash freeze on tax credits, limits on payments to families with more than two children and a steep reduction in the amount of Universal Credit claimants can earn before their benefits start to be withdrawn (known as work allowances).

The expected spike in consumer price inflation over the coming three years due to the plunge in sterling since the Brexit vote means that the real terms hit from that cash freeze on low income families will be greater than previously anticipated.

Ms May is already under intense pressure in Parliament over another element of Mr Osborne’s welfare cuts package, namely plans to restrict access to disability benefits known as Personal Independent Payments.

And Liberal Democrat treasury spokeswoman, Baroness Kramer, said: “With the upcoming Budget, the Government have a chance to change course. For all the talk about the ‘just about managing’ we have seen no real help for them. It is time for the Government to act.”