White American voters did not vote for Donald Trump primarily because they were economically “left behind” by globalisation but because they are antipathetic to diversity and hostile to the way the US is changing ethnically, according to research.

The Daily Mail today said Mr Trump’s victory was a “revolt by America’s ‘forgotten’ white working class” and numerousanalyses have linked his appeal to economic suffering among low-income white communities in America.

But statistical work by Eric Kaufmann, professor of politics at Birkbeck College, University of London, suggests a strong correlation between support for Mr Trump among white Americans and those who prefer values of order and stability to those of tolerance of diversity and difference.

Mr Kaufmann used a proxy question from surveys commissioned in August to determine whether respondents have such a worldview: “Is it more important for a child to be considerate or well-mannered?”

The chart below shows the level of support for Mr Trump among white Americans on the vertical scale and family income on the horizontal scale. 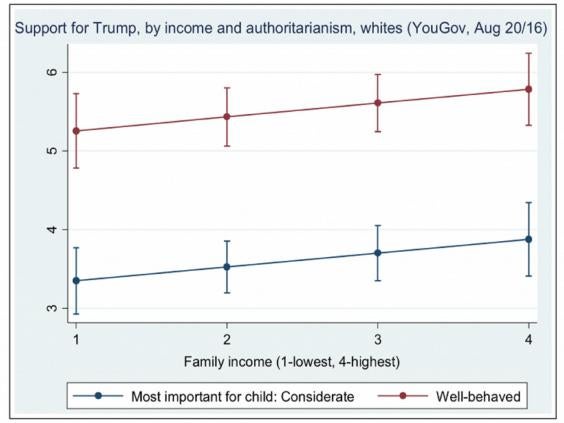 Support for Mr Trump among people who answered the question about childrens’ appropriate behaviour in both ways rises with income, but Mr Kaufmann said this rise was statistically insignificant.

The major finding, he said, was that support for Mr Trump was structurally considerably higher among those who feel that children should be “well-behaved”, an answer that indicated an order-focused world view.

“This, and not class, is what cuts the electoral pie in many western countries these days,” said Mr Kaufmann.

He added that this anti-diversity mindset, rather than economic factors, was also the primary determinant in why white British people voted for Brexit in June. 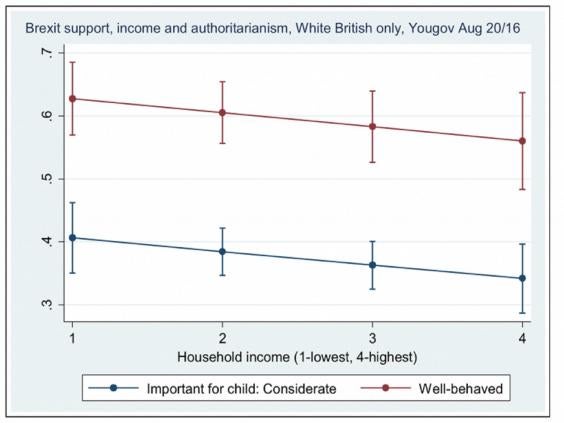 Results from a similar survey show a mild slope on the income front, with less well-off people tending to favour Brexit. But the big structural gap relates to values, with those who think children should be well-behaved rather than considerate, showing much more support for leaving the European Union.

Mr Kaufmann linked the election of Donald Trump, Brexit and also the appeal of explicitly racist right-wing populist movements in Europe to this anti-diversity mindset among the majority white populations who sense their countries are changing due to higher immigration and more liberal government policies.