I’ve been to some wacky parades in my time – from a gay pride flotilla on Amsterdam’s canals to a pirate procession in Florida – but never in my life have I seen anything like this. I’m standing on the sidelines of a maelstrom of movement, surrounded by the smoke and din of a thousand firecrackers. In front of me, people in colourful robes are streaming, barefoot, down the street at such a pace that it’s hard to take everything in. Some of them are mouthing prayers, others make animal noises; but it’s what the majority have done to their faces that makes this so utterly arresting.

The Phuket Vegetarian Festival, an annual event here on Thailand’s largest island, turns out to be so much more than a celebration of tofu and salad. The highlight of the nine days is the remarkable parade I’m watching. Its purpose is to bring good luck and drive out evil spirits; and to better intimidate those spirits, participants put on a show of strength by engaging in extreme facial piercing. 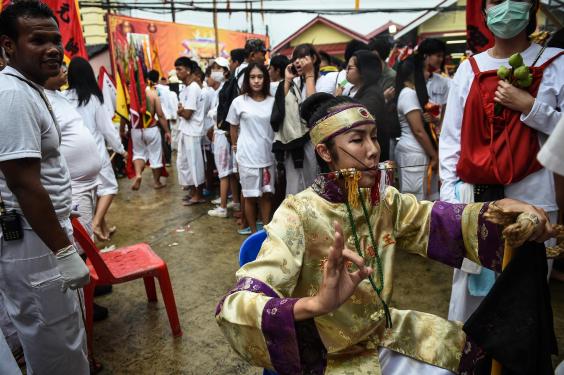 Participants sink into a trance before skewering their faces (Getty Images)

It’s mind-boggling to observe. Some bear a single spike decorated with fruit or carved dragons though their cheeks. Multiple spikes are more popular, with seemingly no limit to their number. One man’s mouth is so filled with long needles that he looks like a game of KerPlunk. Even more striking are those with especially daring facial adornments. I see swords, cleavers, rifles, chains and daggers inserted through people’s cheeks. Some carry parasols through their bottom lips; and more than a few look as if they’ve accessorised with anything they could find in the knife drawer.

As they file past, firecrackers fizz and spark noisily around their heads and feet. Incredibly, nobody flinches. Indeed, there’s no blood, nor anything to suggest that their lacerated faces cause them pain. This, I’m told, is because participants sink into a state of trance before setting out. Embodying the gods, they are fearsome and fearless as they take to the streets, terrorising the demons by brandishing weapons and ceremonial whips. Faced with such an alarming sight, it’s no wonder the spirits don’t linger.

The Phuket Vegetarian (or Nine Emperor Gods) Festival is celebrated by the island’s ethnic Thai Chinese population, whose ancestors came to work in 19th-century Phuket’s tin mines. They brought deep-rooted traditions with them, including the custom of going meat-free once a year to promote spiritual cleansing. They sought further purity through ritual face-piercing and walking on hot coals, both of which add an air of circus and drama to the modern-day festival.

Those early immigrants also built temples for worshipping their gods. A total of 24 lie scattered in towns and villages across the island, and each celebrates the Nine Emperor Gods with its own fire-walking and parade. I’m catching the action in Phuket Town, where several temples, including the largest come together to create the festival’s biggest and loudest parade. It starts and finishes at the main temple, so as the procession begins to thin out I follow along to its conclusion. 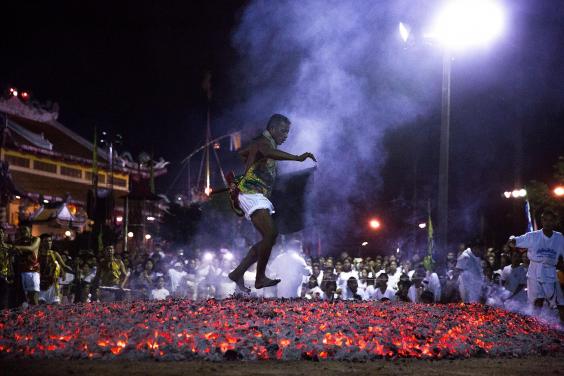 The parade snakes its way through Phuket Town’s historic centre, where pastel-painted terraces of Sino-Portuguese “shophouses” are strung with red paper lanterns to symbolise good fortune. Lining the streets are dozens of altars, also dressed in red for good luck. They’re laden with offerings for the gods being channelled by some of the parade’s participants.

As they pass, these “spirit mediums” pause at the altars to consider their offerings. Onlookers, wearing white to represent purity, gather round with palms pressed respectfully together and bow their heads in thanks as the spirit mediums distribute their blessings and move on down the street. 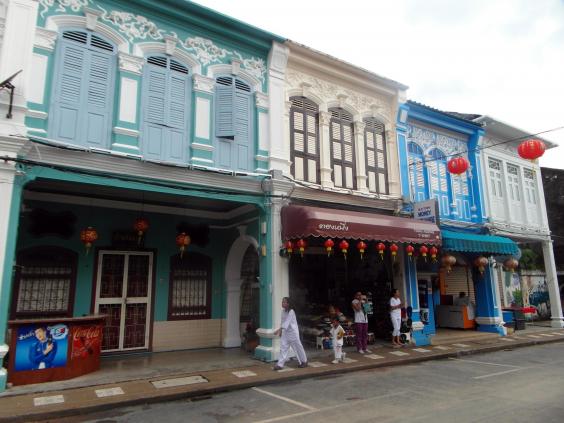 The pace slows considerably on the final approach to the temple. The streets hereabouts are filled with food stalls selling dumplings, noodles, stir-fries, curries and leaf-wrapped parcels of sticky rice – all vegetarian, of course. There’s no time to try anything, though, as by now I’m beneath the paper lanterns and long, silk flags of the temple’s forecourt.

In contrast to the hubbub in the streets, the atmosphere here seems suddenly muted. I watch as participants remove their piercings and enter the temple to expel the spirits. Back outside and released from their trance, they look at once beatific yet dazed, though some are clearly spent and need to be helped from the scene by their cohorts. 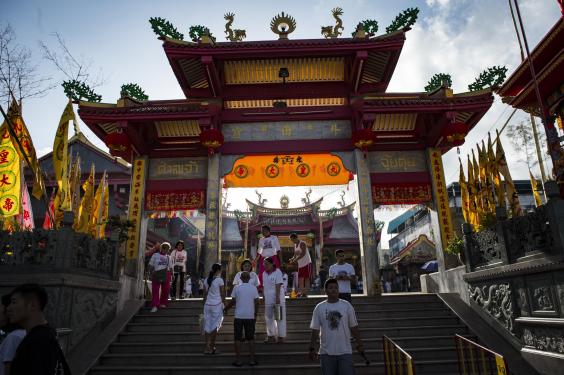 The Jui Tui shrine during the festival (Getty Images)

I take this as my cue to leave and head back to the sanctuary of my hotel. Later, realising that I’m hungry, I reach for the room service menu; but as I pick up the phone to place my order, I find myself battling my conscience. After everything I’ve seen today in pursuit of vegetarianism, would it be okay to order a chicken Pad Thai?