Strangerer things: what’s next for the Netflix smash?

There will be more Stranger Things. How much more, though, is quite another matter. Although the Duffer brothers have mooted the possibility of either one or two more seasons, it’s starting to look like Netflix needs to keep it around as long as it can. 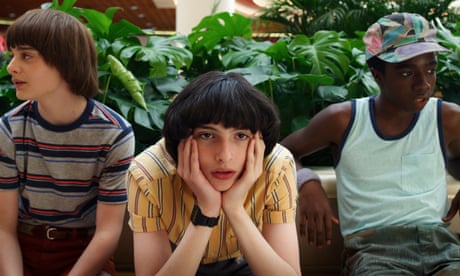 Stranger Things 3: a flawless finale – but what a slog to get there

Because Netflix might be in trouble. This week it announced that it had lost 130,000 US subscribers – its first drop in several years – while only achieving half of its global growth forecast. And worse is to come. A rush of new streaming services is in the process of stripping Netflix of its library. Friends is going to HBO Max. The Office is going to NBCUniversal. Disney+ could snatch back anything by Disney, Marvel, Lucasfilm or 20th Century Fox. If Netflix is going to remain a world leader in streaming television, it needs all the original hits it can get.

And right now Stranger Things is the biggest hit it has. Four days after its launch, Netflix tweeted about the record-breaking number of viewers who’d either watched or completed Stranger Things 3. Furthermore, a recent survey discovered that Stranger Things was the second most beloved show on Netflix, after the soon-to-end Orange is the New Black, even outscoring Friends.

So Stranger Things isn’t going anywhere. But what does the future hold? Here’s a timescale of educated guesses.

First, and most inevitably, let’s not kid ourselves that Hopper is dead. Sure, it might have looked to all the world like he died at the end of Stranger Things 3, but then came the post-credit sting with all the pointed talk of “the American”. Also, it’s hard to ignore the fact that David Harbour is still under contract to the show. Plus, you know, the way that he’s still talking about things that Hopper will do in the future, like when he told Slashfilm that Hopper has karmic debts to pay for how dead he’s been for a long time”. So Hopper will be back. He won’t smoke as much, but he’ll be back.

Paul Reiser might also make a return. In Stranger Things 2, he fulfilled the Mandatory Older Actor From The 1980s role that’s been filled by Cary Elwes and Matthew Modine in other seasons, but he returned by helicopter for a stunned-looking cameo in the aftermath of The Battle of Starcourt. This could mean that his character – a high ranking scientist specialising in The Upside Down – is due to play a bigger part next year.

And Eleven will regain her powers. She lost them towards the end of Stranger Things 3, presumably to give someone else a chance at being the hero. But will they come back? MilliComine Bobby Brown has teased that they might not, telling Entertainment Weekly that “Eleven is powerful with and without powers”. And that might be true, but she’d also be boring without them. Her powers are the only thing stopping her from becoming a sentient promotional tool for Eggo. Maybe her awful friends from that terrible bottle episode in season two can come and help her. Wouldn’t that be a treat?

Hawkins is also likely to be less of a fixture. Joyce and her grab-bag family have all moved away – much, much later than they should have, given everything that happened in season one – and Hopper is probably in a Russian cell somewhere. According to Matt Duffer, who spoke to Entertainment Weekly last week, “I think the biggest thing that’s going to happen is it’s going to open up a little bit, not necessarily in terms of scale, in terms of special effects, but open up in terms of allowing plotlines into areas outside of Hawkins.” But then again, the brothers also told Vanity Fair that “The story of Hawkins is not quite finished!” So maybe everyone will be brought back to Hawkins by some sort of Upside Downy event, but that probably won’t happen immediately.

Beyond that, who knows. My guess is that the Duffer Brothers will end their story and Netflix will be desperate for them to stay, so they’ll revert back to their original plan to Make Stranger Things an anthology series, and tell a completely different tale under the Stranger Things banner. And then obviously that will be a failure, so the Duffers will bring back the original cast – by that point in various states of post-child star disrepair – for a sloppy and directionless reunion season. And then two years after that, Disney will buy Netflix, leading to a new Stranger Things series where a number of lower-tier Avengers will travel to the Upside Down to punch a Demogorgon in the face. Memorise this last paragraph, because it will definitely come true.