I was young when I first heard the music. It came from the earthen road outside where a man was selling bread from a tuk tuk. Unlike other colourful three-wheeled vehicles, the back of this one held a glass display cabinet piled high with neatly stacked baked goods. “It’s the choon paan man,” my father told me.

“Choon paan” loosely translates to “music bread” in Sinhala. During my childhood, the fresh-off-the-oven kimbula (“crocodile”) bun we bought from the choon paan man for evening tea gave me bliss. This beautifully fluffy, buttery, home-baked bun was sprinkled with sugar and twisted into a slender, crocodile-like shape. Half of it was for me, the other for my father. 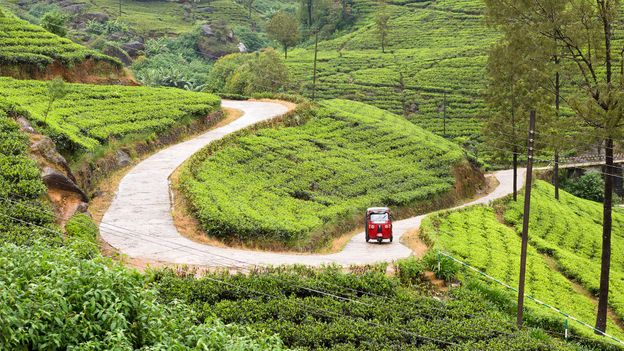 Growing up, a “music bread” tuk tuk would drive to the author’s rural village in Sri Lanka twice a day, always playing Beethoven as it went (Credit: proxyminder/Getty Images)

Twice a day starting at 06:30, choon paan trucks would drive along the dusty path near the paddy fields of my family’s rural village in Kurunegala, 120km north-east of Colombo, selling loaves of bread. Early in the morning, the men circled the roads with fish buns and sausage rolls made at small bakeries. They reappeared in the afternoon around 16:00, bringing sweet buns for tea. Some were buttery, round-shaped buns dotted with raisins. Others were stuffed with jam or sprinkled with sugar.

For us growing up on the tropical island, Beethoven meant bread

For years, these small trucks all played the same, tinny recorded music. When I heard the faint hum of the breadman from a distance, I would run to the dusty path and call my father. Years later, during music classes in school, I realised that this familiar tune that we Sri Lankans just called “choon paan music” was actually Beethoven’s 1810 classic Für Elise.

So, how did this classical composition written in Austria come to symbolise fresh-baked confections in Sri Lanka? 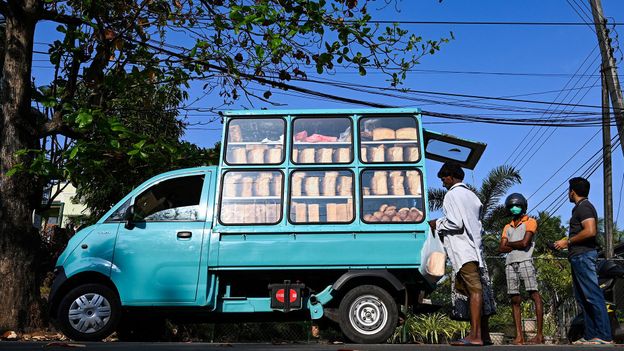 For years, the tinny sounds of Beethoven in Sri Lanka has been synonymous with fresh-baked bread (Credit: Lakrunwan Wanniarachchi/Getty Images)

When tuk tuks became increasingly popular in Sri Lanka in the early 2000s, many bakers used the three-wheeled vehicles to take their bun business on the road and sell to distant neighbourhoods and villages. This was also around the time when mobile phones became popular. Just as an ice cream truck’s jingle alerts residents that it’s approaching, these mobile bakers started playing their mobile phone’s ringtone through a horn speaker to let residents know the choon paan truck was near.

Of course, one of the most popular ringtones from the early 2000s was Beethoven’s iconic masterpiece, Für Elise. So, whenever people in Sri Lanka would hear it, we’d head out to wait for the “music bread” truck to arrive. Ever since, for us growing up on the tropical island, Beethoven meant bread.

You may also be interested in:
• Turkey’s unique hand-sanitising method
• A Javanese dish to banish the plague
• The law of generosity combatting coronavirus in Pakistan

After relocating to the city of Kandy for high school, I still heard Für Elise every day. Even when I was already late for class, with my school tie loosely hanging around my neck and my hair braided into two with white ribbons, I ran after the choon paan truck to catch it for morning fish buns. Stuffed with canned fish, spiced potato and chopped vegetables, they were a treat with a cup of piping-hot ginger tea.

Six years ago, I moved again, to Sri Lanka’s capital, Colombo. In the six years I’ve been here, I’ve seldom seen a choon paan truck nor heard the familiar tune I grew up with.

Sri Lanka’s famous music bread trucks have made a comeback, thanks to an unlikely reason: the coronavirus pandemic

According to Colombo-based baker Padmini Marasinghe, that’s because it has recently become much more fashionable – and even a status symbol – to be able to buy baked goods at a traditional bakery than to buy bread from a truck. As a result, Sri Lanka’s once-ubiquitous music bread trucks have now largely disappeared.

As Marasinghe explained, many urbanites were convinced that breads from chain bakeries were of better quality than those from mobile trucks. “But choon paan products are from home bakers. They are better than mass-produced food in large bakeries,” Marasinghe said. 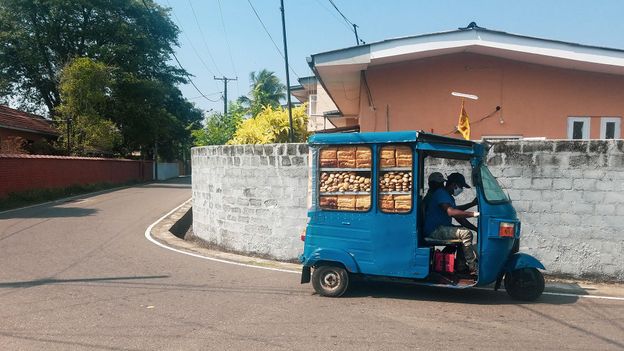 She also added that people complained choon paan goods were too expensive given their small, mobile operation. “They reduced prices and curtailed the quality to make marginal profits. There was less filling in a fish bun or little butter in a kimbula bun, so they lost their clientele,” Marasinghe said.

Then in 2017, the former government banned loud music from mobile bakeries, which further led to their demise. Some trucks circled the roads without music but failed to make a profit. Without Beethoven notifying the neighbourhood that bread was coming, it seemed that residents wouldn’t rush to the street.

In recent years, cities and tourist towns have also seen a rise in home delivery services. “People would rather order fish buns from an upmarket bakery on Uber Eats” Marasinghe said. “This put choon paan out of business.” 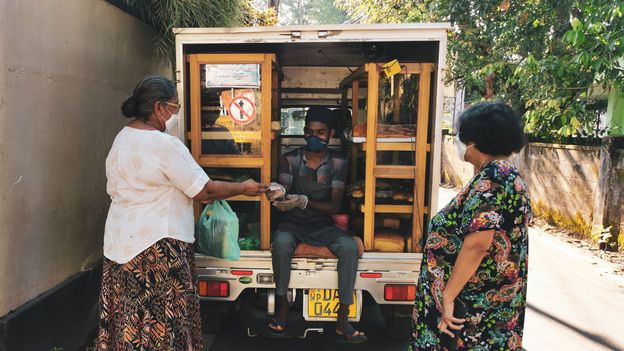 Marasinghe admits that the idea of starting a choon paan truck had always seemed tempting to her, but by the time she started her small bakery in 2019, nearly all the bread trucks were gone.

Yet, in recent months, Sri Lanka’s famous music bread trucks have made a comeback, thanks to an unlikely reason: the coronavirus pandemic.

As the virus began sweeping across Asia, Sri Lanka imposed an island-wide curfew to slow its spread. The government ordered restaurants, bakeries and all “non-essential” businesses to close. Marasinghe had to shutter her business, too. Yet, the government did permit the door-to-door sales of baked goods.

Many of these mobile bakeries are now back on Sri Lanka’s streets, with residents listening for the familiar ringtone sounds of Für Elise

“With no way to salary my bakery staff, I decided to start a choon paan truck as home delivery of bakery products [was] termed an ‘essential service’,” she said.

Unable to find a tuk tuk, Marasinghe’s husband borrowed a friend’s mini lorry and turned it into a makeshift choon paan truck to operate in Hanwella, about 30km from Colombo. “We played Für Elise so it would send the message: the choon paan man is back!” Marasinghe said.

She is not alone. Many of these mobile bakeries are now back on Sri Lanka’s streets, with residents listening for the familiar ringtone sounds of Für Elise and rushing to their gates for loaves of bread. In fact, almost overnight, bakers dusted off their old choon paan trucks and created a delivery network of tuk tuk bread to ensure that housebound islanders could get their buns.

“They’ve found a new appreciation,” said Colombo-based journalist Amalini De Sayrah. “Perhaps we didn’t realise how valuable it was, but now stuck at home with no way to go out, people are realising the value of choon paan.” 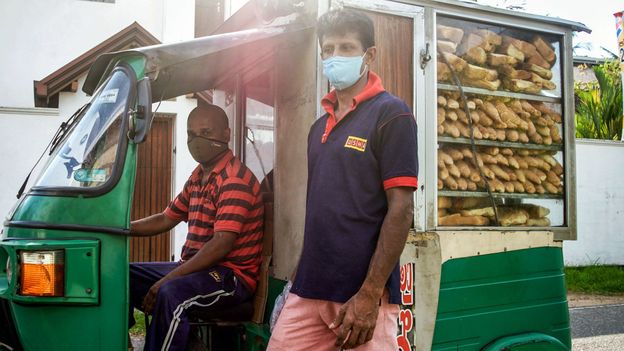 Sri Lanka’s choon paan trucks have recently been deemed “essential” by the government and returned to the island’s streets (Credit: Kaveen Rodrigo)

Arul Kogilan, a physician volunteering as part of a Covid-19 prevention task force, appreciates the return of choon paan drivers as essential-service providers. “With bakery goods being delivered to their gates, people can stay home avoiding the risk,” he said. “But we need to acknowledge that they are putting themselves out there at risk for us.”

While the curfew was relaxed late last month, islanders are advised to stay home except for obligatory work.

Now that I’m sheltering in place back home where I grew up, at around 07:00 am every morning, I wake up to the sound of choon paan. The truck travels past our house as the rattling Fur Elise eventually fades into a vague hiss. When I get up, my father has already bought bread. In the late afternoon, when I hear Fur Elise from a distance, I cry out for my father.

It’s as though I’m young again, waiting for the classical ringtone and the simple joy of a sugar-sprinkled choon paan kimbula bun.

One half for me, the other for my father.