The question of Sergio Aguero’s future provoked a prickly response from his club manager on Friday. “He is so happy, I am so happy, 10 times I answer,” Guardiola had said. “No more please.”

That will not prove easy, the Argentinian forward once more proving pivotal, scoring his 115th Premier League goal for the club and ensuring a fourth straight league victory. He also turned the direction of a game. For 41 minutes yesterday Manchester City had their hands full. Sunderland had missed chances and then struck a post, through Jermain Defoe.

It looked a struggle, an effort to rise to the Premier League’s bottom team, and then Aguero struck, almost in the blink of an eye, a move that saw the ball swept from left to right, starting with Yaya Toure, then to David Silva, quickly to the overlapping Raheem Sterling, and while the low cross took a slight deflection of the leg of Brian Oviedo, it was the response of Aguero that changed the direction of the game. The forward was behind Lamine Kone and fired the ball past Jordon Pickford before the Sunderland goalkeeper could flick out a right hand to stop the opening goal. 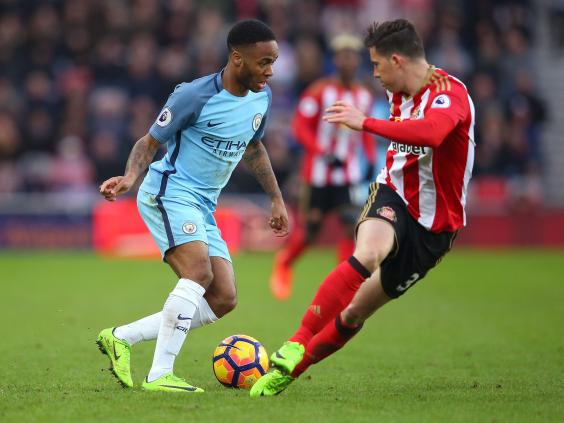 It changed the game and it finished Sunderland. It will lend strength, if it was needed, to Aguero’s hand if discussions about his future, which have been suggested, take place.

“We’ll take it one game at a time,” Guardiola had said before the game. He is learning the English way, but when the goal was followed by another, just before the hour mark, through the lightening quick pace of Leroy Sane, he may have allowed himself a private glance at a league table that is softening in his debut season in the country.

Much will rest on whether West Ham can do anything against their London rivals Chelsea on Monday night, but the gap was down to eight points to the division’s summit when the City bus left the North East.

Importantly too, there is now just a five point cushion to fifth place and Arsenal and the unthinkable prospect of missing out on a Champions League place. City and Guardiola have found a way at just the right time. Victory was their fourth straight in the league. They have not conceded a goal in any of those games, since the humbling loss at Goodison Park. 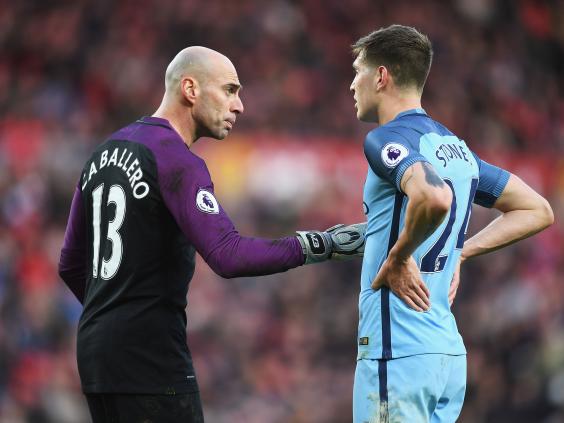 It suggests a corner was turned that afternoon, when nothing seemed to go right. If there was fortune at the Stadium of Light, perhaps they carried it for it was not an afternoon without its problems.

Defoe striking a post and then Fabio Borini heading a difficult rebound wide was not the only opportunity that Sunderland, now with just one win in their last 10 games, had in the opening 45 minutes.

The right back Billy Jones was the culprit twice. In the 36th minute, he lost Bacary Sagna and from eight yards his downward header was stopped by Willy Caballero. Four minutes later, from the opposite flank, he was again free, this time from a Seb Larsson corner and headed wide. They were massive chances for a Sunderland side as desperately short of firepower as the one David Moyes is leading. 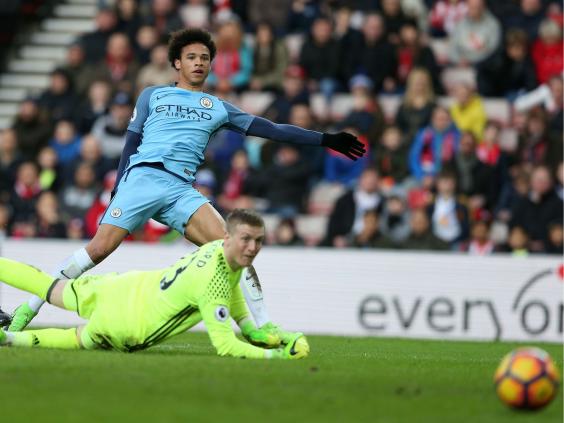 The entire outfield side to face Manchester City had scored 18 Premier League goals between them, with Defoe responsible for 14 of them. They could not afford to miss and that was hammered home by the clinical finishing of Aguero three minutes before half time.

Silva found Sane on the overlap for the second, in the 59th minute, the ball again being moved from right to left and the forward clipped a right foot angled shot past Pickford. There should have been more. The substitute Kevin De Bruyne shot narrowly wide and Pickford excelled to stop Aguero adding a second. It was all City by then.

They will face Stoke on Wednesday at the Etihad Stadium, knowing the possibility of a late charge at catching Chelsea is alive, at least in theory.