The UK terror threat level has been lowered to severe after being raised to critical, its highest level, following Friday’s attack on a London Tube train.

A second man has been arrested as part of the investigation into the attack.

The 21-year-old was arrested in Hounslow, west London, on Saturday night on suspicion of a terror offence and is in custody in south London.

An 18-year-old man is also being held on suspicion of a terror offence over the Parsons Green explosion.

The “severe” terror threat level means an attack is no longer imminent but is still highly likely.

Police are searching a residential address in Stanwell, Surrey, in connection with the 21-year-old man’s arrest.

Home Secretary Amber Rudd said that over the next few days the military would return to their original positions.

She said the police had made “good progress” in the investigation but urged “everybody to continue to be vigilant but not alarmed”.

Assistant Metropolitan Police Commissioner Mark Rowley said police had gained a “greater understanding” of how the bomb was prepared but said there was “still much more to do” in the investigation.

Analysis: No ‘all clear’ yet

The lowering of the threat level is an important sign.

It means that intelligence chiefs have looked at the developing picture in the Met’s huge operation – and other threads we will never see, from perhaps MI5 and GCHQ – and concluded that detectives now have a good handle on what happened on Friday at Parsons Green.

Or, to put it another way, the threat level would not have been reduced if anyone within the counter-terrorism network still thought there was a bomber, or accomplices, on the loose.

This is not the same as an “all clear” – intelligence is only ever fragmentary.

Detectives now appear to have time on their side.

Providing they make evidential progress, they could conceivably hold both suspects for up to a fortnight before they have to charge or release them.

Of the 30 people injured in Friday’s attack, one remains in hospital, NHS England said.

Speaking to the Andrew Marr Show earlier, Ms Rudd said there was “no evidence” to suggest so-called Islamic State were behind the attack.

“But as this unfolds and as we do our investigations, we will make sure we find out how he was radicalised if we can,” she said.

Jack Durston, 16, was on board the train. On Sunday he told the BBC: “I had moved to the middle of the second carriage to get a seat. Now I realise I was lucky to be further away from the blast.

“I didn’t hear the blast but I saw the flames and heard the screaming. It was crazy and very scary.

“Everyone tripped out of the doors. Once we were on the platform there was this horrible chemical smell. It was on my clothes and skin.”

Defence Secretary Michael Fallon said internet giants such as Google, Microsoft and Facebook, were not doing enough to help in the fight against terrorism.

On a trip to Qatar, Sir Michael said they need to “take down information that allows terrorists to construct the sort of device we saw on the Tube”.

Police are continuing to search a house in Sunbury-on-Thames in Surrey.

It is thought the 18-year old, who was arrested in the port of Dover on Saturday morning, lives there.

The BBC’s home affairs correspondent Dominic Casciani, who was at the scene, said a large number of officers have been working inside the property and a forensics tent is in place in the back garden.

The house belongs to an elderly couple known for fostering hundreds of children, including refugees.

Ronald Jones, 88, and Penelope Jones, 71 were rewarded for their service to children when they were made MBEs in 2010.

The couple are said to be staying with friends following the police raid, during which surrounding houses were evacuated.

Friend Alison Griffiths said the couple had an 18-year-old and a 22-year-old staying with them recently.

She described Mr and Mrs Jones as “great pillars of the community”, adding: “They do a job that not many people do.” 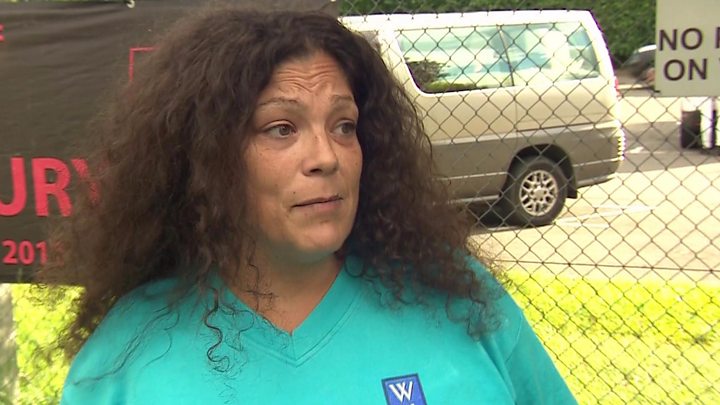 She told BBC Breakfast that cuts in policing have “possibly jeopardised our ability to respond to terrorism”.

But Ms Rudd said the government is “committed to making sure the security services and the police have the right resources”.

She announced £24m of funding for counter-terrorism operations across the country.

She added that US President Donald Trump’s suggestion that the terrorist behind the attack was “in the sights of Scotland Yard” was “pure speculation”.