The Swiss government has defended its law requiring asylum seekers to hand over assets in excess of $1,000 (£700; €900) following international criticism of similar proposals in Denmark.

Assets were reportedly seized in just over 100 cases in Switzerland last year out of almost 30,000 asylum applications.

The Swiss Refugee Council has criticised the practice as unworthy.

But the government says the policy reflects the will of Swiss voters.

Danish MPs debated the plans on Wednesday and the bill is expected to be voted on later in the month.

‘They took all our money’

Asylum seekers in Switzerland are required to declare their assets on arrival, and anything over $1,000 can be taken.

Government spokeswoman Lea Wertheimer told Swiss television: “Swiss law states that asylum-seeking refugees who have money have to contribute to the costs that they cause while being here.

“And that’s why we take their valuables away once they arrive in Switzerland.” 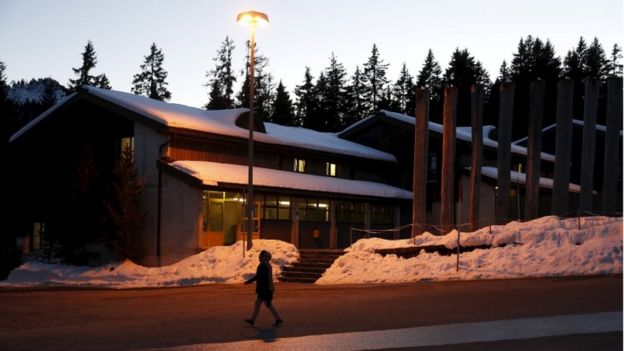 A centre for refugees in the Glaubenberg area in central Switzerland

But Stefan Frey, from the Swiss Refugee Council, described the practice as “daylight robbery”.

“This is unworthy” he was quoted as saying. “This has to change.”

A Syrian man told Swiss television that he had been forced to sell his house to pay people traffickers to help his family flee the conflict in their country, but the money left over was seized when he arrived in Switzerland.

“In Zurich we were controlled by the police. They took away all our money,” he said, explaining that he had about £2,000 at the time.

“It seems that it is their right to take it away. They gave us a receipt. The officers promised that the money would be returned, but until now this has not happened.”

On Wednesday, the UNHCR criticised the proposals being considered in Denmark, saying it was hard to believe that the country wanted to confiscate the few belongings that asylum seekers had managed to save.

But Integration Minister Inger Stojberg said the measures simply put migrants on an equal footing with jobless Danes, who must sell assets above a certain level to claim benefits.

Wedding rings and other items of sentimental value will not be included in the plans.

Unlike Denmark, Switzerland is not a member of the EU – but it is part of the Schengen Agreement, which is supposed to enable passport-free travel between countries.

Some countries have reintroduced border controls amid concerns over the arrival of more than a million migrants in Europe last year.

In this article:migrant crisis, Switzerland