The full impact of that decision will be known only in time but the short-term effect was startling as a Leicester team without a goal or victory in the Premier League in 2017 stopped the rot in emphatic fashion with a 3-1 victory over Liverpool. On Saturday they had slipped into the bottom three since the first time since April 2015. Now they climbed out of it after an evening where they looked like champions once more.

Craig Shakespeare’s first game in caretaker charge brought the bounce the club’s owners will have hoped for and boosts his chances of remaining in the post, at least for the short term. Suddenly Saturday’s match against Hull City looks eminently winnable for a side who had previously lost five in a row in the Premier League.

What it does for Liverpool is another story on a dreadful night for the Merseysiders, who were overrun in midfield and horribly uncertain in defence where Leicester preyed on their high line. This had been an opportunity for Jürgen Klopp’s men to climb back into the top four; instead they added Leicester to the list of bottom-half outposts where they have fallen short this season, along with Burnley, Bournemouth and Hull. Liverpool have won only two of their 12 games played in 2017 and at this rate, could even find themselves in a fight with Everton for sixth place.

This was Shakespeare’s first starting XI since taking temporary charge and it was the essentially the one which delivered the league title last season with the same players – N’Golo Kanté excepted – and same shape. Leicester began the match, moreover, with the same intensity and energy and desire as last season. 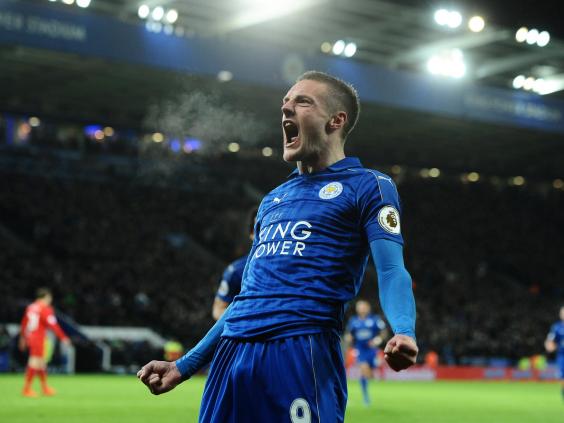 Admittedly there was too much intensity in Vardy’s poor, unpunished, first-minute challenge on Sadio Mané when he took ball and man and had Jürgen Klopp hopping up and down in anger on the sidelines. But the tone was set and Leicester’s urgency nearly brought an early goal when Shinji Okazaki got his head to a Vardy shot but Simon Mignolet saved well.

The club’s vice-chairman Aiyawatt Srivaddhanaprabha had defended the Leicester players in his match programme notes from the accusation they had conspired in Ranieri’s downfall. “This was our decision, our decision alone and it is unfair that our players, who supported Claudio fiercely, are being accused of disloyalty,” he wrote. Maybe, but the difference in their performance levels told its own story as a revitalised group of players set about harrying Liverpool with an impressive unity of purpose. 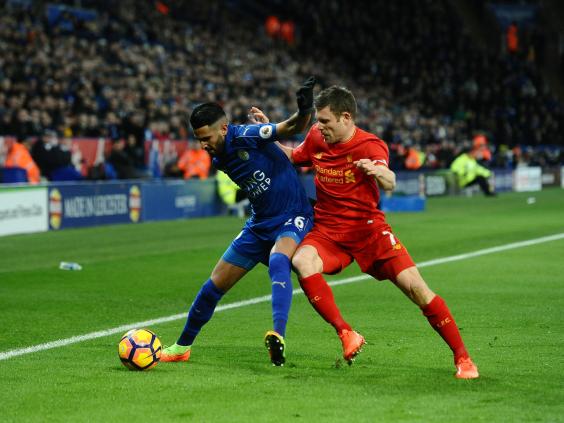 Vardy should have given them the lead after 20 minutes after he collected a long Schmeichel kick with a terrific touch and turned Joel Matip. He failed to beat Mignolet then but soon had his first league goal.

Again, it was straight out of last season’s playbook. From the centre-circle Marc Albrighton dissected the Liverpool centre-backs with a brilliant first-time ball to send Vardy haring away down the inside-right channel. He had not scored in the Premier League since 10 December but suddenly this was the Vardy of 2015/16 as he flashed the ball past Mignolet at the near post. 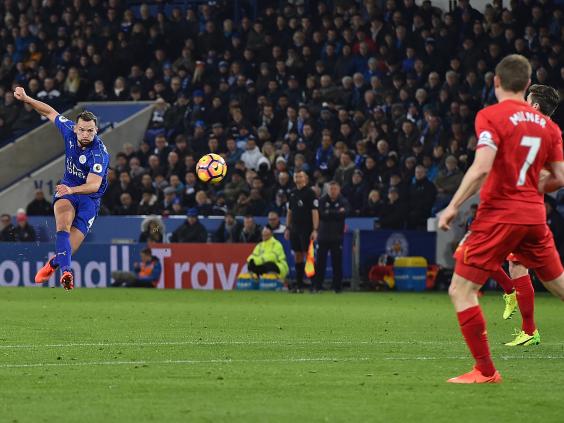 Drinkwater scored a sublime goal for the hosts (Getty)

Leicester’s second was even better as Drinkwater pounced on a headed clearance by James Milner and from the edge of the D directed a wondrous, volleyed shot into the corner of Mignolet’s goal.

The absence of captain Jordan Henderson, sidelined by a foot injury, did not help Liverpool but they were second best from the first whistle. Kasper Schmeichel made decent saves from Philippe Coutinho and Emre Can before the break but this was a shadow of the Liverpool who had blown away Tottenham Hotspur in their last outing 16 days earlier. Whatever the benefits of last week’s break to La Manga, they were not evident here. 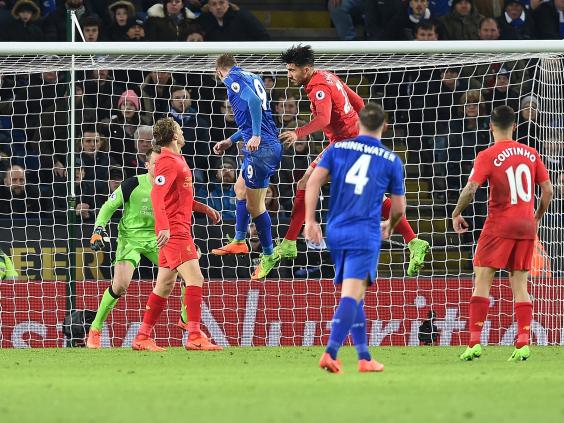 Vardy heads home his second of the night (Getty)

Liverpool’s night got worse as the electric Vardy rose above Can to head in from a Christian Fuchs centre. When Liverpool did respond, it was too late. The King Power crowd had just lit up their phones and chorused Ranieri’s name when the visitors pulled a goal back. Schmeichel had done well to deny Adam Lallana but Coutinho’s low 15-yard strike was too precise

By now Klopp had sent on Divock Origi and Alberto Moreno for Lallana and Mané but there was no late cavalry charge. We even saw Riyad Mahrez come to life with a jinking run and lay-off to Drinkwater who nearly added a fourth goal. Penny for the thoughts of Signor Ranieri?