NHS says there is very low chance of Ebola in the UK, an epidemic even more so due to the way Ebola spreads 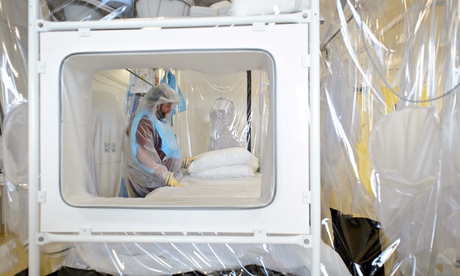 A nurse demonstrates the facilities at the Royal Free hospital in August 2014. Photograph: Leon Neal/AFP/Getty Images

Dozens of hospitals could end up isolating and treating patients suspected of having Ebola if a serious outbreak occurs in Britain, the NHS has said.

All England’s major hospitals are making preparations in case they have to play a part in tackling the disease, not just the four centres specialising in control of infectious diseases which would take any initial flurry of patients.

An NHS spokeswoman confirmed that all hospitals with the capacity to isolate patients, in siderooms or elsewhere, were “gearing up” for the possibility of receiving Ebola patients.

It is not known exactly how many of England’s 160 acute hospital trusts have that capacity but it is thought to be the larger ones, totalling several dozen.

If cases do emerge, the NHS’s plan is for patients to be initially taken to the Royal Free hospital in north London.

It has the UK’s only high-level isolation unit used to treat people with highly infectious diseases. It is where British nurse Will Pooley – who contracted Ebola while working in Sierra Leone – recovered from the disease in August and September after receiving the experimental drug ZMapp.

Although the unit has only two beds, capacity there will be expanded as a first step, if the need arises, in order to utilise the skills and experience of its dedicated team of doctors, nurses and laboratory staff specialising in infectious diseases.

But the hospital said it was “unlikely” that more than two patients would be admitted with Ebola at the same time.

After that, the infectious diseases units at the Royal Liverpool hospitals, Royal Hallamshire Hospital in Sheffield and Royal Victoria Infirmary in Newcastle upon Tyne would receive cases.

They would be either cases that had emerged in their area or potentially patients brought from London because the Royal Free was already at capacity, according to one intensive care doctor.

But “many” hospitals beyond those four could also play a part in treating Ebola, if enough cases emerged, the NHS England spokeswoman said.

But doctors today stressed that they are not expecting cases of Ebola.

Dr Nick Beeching, clinical director of the Tropical and Infectious Diseases Unit at the Royal Liverpool Hospital, said that his unit is on standby to assist the Royal Free in managing patients with Ebola. However, “while we are planning for this possibility we do not currently expect to care for any patients with confirmed Ebola. There is no risk to the general public and anybody coming to the Royal as a patient or visitor should not be concerned”, Beeching added.

“The risk of Ebola arriving in the UK remains very low and it can only be caught through direct contact with an infected person’s bodily fluids [such as saliva or blood]”, said Dr David Throssell, medical director of the Sheffield Teaching Hospitals NHS Foundation Trust.

Its infectious diseases unit “is well-prepared with the equipment, facilities and specialists to deal with any cases of Ebola appropriately and safely”, he added.

Meanwhile, the time is coming when the British government will have to start putting forward a “constructive public health message” to counter the potential threat from Ebola, according to a doctor who has recently returned from working in west Africa with people infected the disease.

Benjamin Black, an obstetrician with Médecins sans Frontières (MSF) who has been working in Sierra Leone and is preparing to return, said that there had been much media attention on how the west could defend itself and paranoia around “the coming plague”.

He told the Guardian: “That’s simply not the situation. When you talk about numbers of people who have been affected in the west it’s very small and it’s very unlikely that there is going to be any sort of widespread disease here.

“However, I do think that there has been a lot of sensationalist material put out there and maybe the time is coming that the government tries to start putting forward a constructive public health message that prepares the population with the correct information because knowledge is power essentially and if you have the right knowledge then you can feel secure in yourself.”

“The essence to a public health message would be to keep it simple. This is a viral infection, much like the way you talk about any other sort of viral infection … Ebola has slightly taken on a sort of mystical element. It’s not mystical. It’s a disease and [can be countered with] basic hygiene measures that we are very equipped with in this country – soap kills Ebola.

“That is missing in some ways. People don’t realise that this is a weak virus. There needs to be direct bodily fluid contact and the reason why you have a situation as it is in west Africa is not based purely on the disease. It’s based on many more factors. It’s to do with social, economic, political general health infrastructure. What we have in the UK and what we have in the west is a completely different situation so I think that the general public should be educated and they should be well informed as well.”

One of a number of volunteers taking part in a six-month trial of an Ebola vaccine at the Jenner Institute at Oxford University has also been speaking about his experience. The vaccine Nick Owen has been given is called ChAd3, which uses a single benign Ebola virus protein (one seventh of the whole virus) to generate an immune response.

It’s carried into the body by a vector, in this case a chimpanzee adenovirus – or, a common cold. He was deliberately given a virus as it gets inside cells and produces a particular type of immunity. A chimp virus is being used as people are often immune to human common colds, meaning the vaccine wouldn’t have a chance to begin to work. Essentially, it’s a process of tricking the immune system into thinking it has an infection.

He said: “The day after I had the vaccine I felt a bit fluey and had a sore arm but by the evening I was absolutely fine. I think it’s a really small price to pay for what we can potentially get out of this vaccine if it’s going to prevent outbreaks of the magnitude we have seen so far this year.”

Owen has been told that the clinical trial team will have early results in immunology by late October or early November, giving them guidance as to whether the vaccine can be used in Liberia, Sierra Leone and Guinea.

“Every NHS hospital trust has put in place guidance and protocols for what should be done if patients arrive with suspected Ebola … The main symptom is a fever of unknown origin in someone who has recently travelled in a high-risk area or has been close to a person suspected to have Ebola. All NHS staff now know, if you have a patient like that, you should ask: ‘is this Ebola?’.

This will not be something that any doctor or nurse has ever seen before. But it will need to be a diagnosis that’s at the front of everyone’s minds.

Trusts have made every member of staff aware of this, not just intensive care staff. The NHS and Public Health England want everybody to be vigilant.

A patient with Ebola may come in through an A&E unit, or be referred by their GP to a hospital respiratory clinic, or they may already be an inpatient but with another illness.

If there’s a suspected case, the first priority is to isolate them in a sideroom, using staff in facemasks and bodysuits, and then seek advice about what to do next.

All acute hospital trusts have an infectious diseases department and every intensive care unit will be able to isolate patients to varying degrees. And all hospitals have personal protective equipment.

But the four hospitals that specialise in infectious diseases and have higher levels of isolation will have all the necessary clothing, from gowns to facemasks and protective suits and masks.

Because of the complexity of dealing with Ebola, it’s sensible to concentrate the care of patients at a few hospitals with the relevant expertise to deal with them.

All the systems have been put in place to deal with patients appearing with suspected Ebola. But until we are faced with patients we don’t know if the preparations are adequate or not.”