ong Kong’s Victoria Peak was once the home of the city’s colonial ruling classes, and these days its mansions still house Hong Kong’s richest. They chose well: topping out at 552 metres (1,800 ft) above the city, the highest point offers up views of a concrete and glass forest rising out of tropical wilderness. But there’s a better way to get a sense of Hong Kong’s mash-up of natural and manmade – a meander down the mountain. 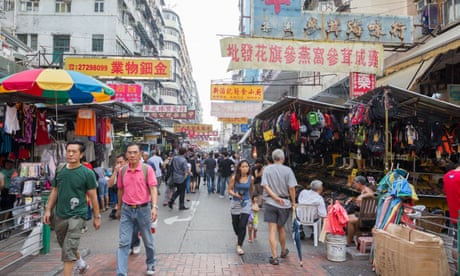 If you’re feeling energetic, then start out with the Peak Circle Walk, a clearly signposted 45-minute flat route around the Peak. The trail has views of the city’s skyscape and also of the island’s far greener south side, looking on to sandy beaches and motor cruisers anchored in sparkling bays.

Time to descend into the city, along the Old Peak Road. The path begins with an unassuming flight of steps around the side of the Peak Tower shopping complex but this paved trail is a gem. As the name implies, it was the first path to run up the mountain; and before the completion of the Peak Tram funicular in 1888 it was the only way up, either on foot or by sedan chair.

Dotted with colonial-era lampposts, the Old Peak Road descends steeply towards the sea

If you’re heading downhill, it only takes about half an hour to complete the pedestrianised section. Dotted with colonial-era lampposts, the Old Peak Road descends steeply towards the sea. Gaps in the foliage reveal skyscrapers that gradually rise to meet you; you’ll find yourself at eye level withluxury apartments and looking down into private swimming pools and tennis courts.

Near the end of the pedestrianised trail is one of the city’s seven boundary stones: placed in 1903 to mark the limits of the one-time City of Victoria (implausibly, one of the stones went missing in 2007). The city has since expanded to sprawl across the entire territory but the boundary stones serve as a reminder of Hong Kong’s once smaller horizons.

The road descends now into the urban mid-levels, where the well-to-do who can’t quite afford the mansions of the Peak live. Following the road down will bring you very neatly to the entrance of the Zoological and Botanical Gardens. Completed in 1871 on rolling plains overlooking the city’s government house, this gently landscaped tropical park hosts lemurs, cranes, meerkats and alligators. 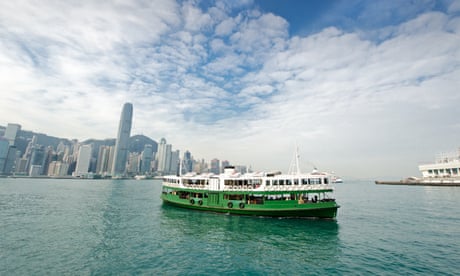 The best public transport in Hong Kong: from double-decker ferries to funiculars

Exit the park onto Garden Road and walk down to St John’s Cathedral. The oldest Anglican church in east Asia was completed in 1849 and while it’s dwarfed by the modern skyscrapers around it, the interior feels like any British cathedral – with the exception of the lazily circling ceiling fans.

Spiritually replenished, it’s time to cross the road to The Murray for some physical refreshment. This new hotel was once a government office tower, and its square, recessed windows were a careful bit of eco-conscious – and budget-conscious – civil service design. By setting the windows back and at an angle, the interiors never receive direct sunlight: thus cutting back on glare and saving the government a considerable air-conditioning bill. Gawp at the building’s three-storey pillared arches over a drink on the open-air patio.

Now cross into Hong Kong Park. Built in 1991, it’s a gorgeous example of the merging of nature and modernity that Hong Kong does so well. The park is suffused with greenery and an impressive manmade waterfall – but glance up and you’re greeted with towers of glass and concrete looming overhead. Above them, higher still, you’ll see the Peak over it all and marvel you’ve made it this far. Make sure to stop by the Edward Youde Aviary for one reason alone: the multi-hued, ground-dwelling crowned pigeons that stomp across the floor.

Head to Flagstaff House, still in the park. Built in 1846, just four years after Hong Kong became a British colony, it’s the oldest western-style building in Hong Kong. For many years it was the home of the commander of the British forces in Hong Kong: now it’s the city’s Museum of Tea Ware, holding a large collection of antique Chinese teapots. Next door, the LockCha tea house can teach you how to make use of all those pots you’ve been gazing it. Its restaurant serves freshly made vegetarian dim sum.

Time to reacclimatise to the hectic city: a glance into the Pacific Placeshopping mall flings us back into fully commercial Hong Kong. This shopping mall, redesigned by British designer Thomas Heatherwick in 2008, is one of the city’s most prestigious. But if you’re dressed well enough for it, then call an end to your downhill journey and instead ascend to Café Gray Deluxe on the 49th floor of the Upper House Hotel. This restaurant and bar has spectacular views of Hong Kong’s harbour, paired with equally fine cocktails. Order an Earl Gray Martini, and toast your descent into the city.

The Peak Tram funicular (HK$37/£3.40) runs from Admiralty’s Cotton Tree Drive straight up the mountain, hitting at times a 27-degree gradient. While the views are phenomenal, the queues can be punishing. The number 15 bus (HK$9.80/90p) from the Central ferry piers winds its way up to the summit, or a taxi from Central will cost about HK$60/£5.50.