It’s a little after six on a Thursday evening at The Lake Pub in Sevrier, a barn-like establishment with nine or 10 pool tables, fewer locals and an American roadhouse vibe, despite the the familiar red British phone box, dartboard and big-screen sports TV.

It’s taken the personable and hard-working tour rep, Ed, and me half an hour of U-turns and stopping to quiz locals to track this place down to an industrial estate with a Lidl, McDonald’s and other usual suspects. We’d managed to find the only corner of picture-postcard, mountain-fringed Lake Annecy that isn’t drop-dead gorgeous.

The reason for this contrarian drive into Lake Annecy’s underbelly is a French television drama, the first series of which was shown on Channel 4 last year, and the second series of which starts this Friday. The Returned (Les Revenants) is a reworking of a 2004 film which managed to make the subject of the undead into something philosophically and spiritually unsettling, as well as human and believable – instead of the usual shoot-em-up stupidity of most zombie horror flicks. 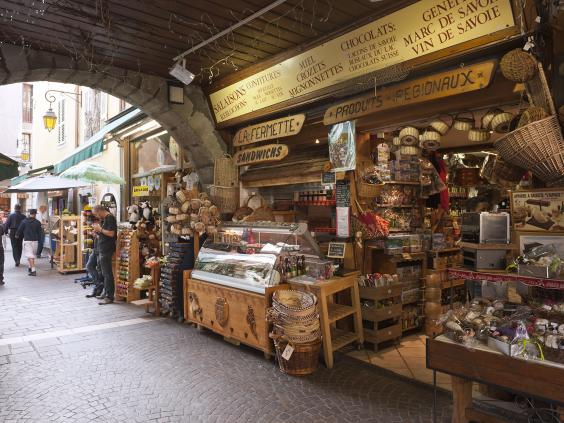 A patisserie in the Annecy Old Town

The Lake Pub, as it’s called in both fiction and in reality, is one of the drama’s main locations – it’s where Lena, the teenage twin sister of Camille, one of the “returned” victims of a coach crash four years earlier, drinks to forget. Oh, and the pub’s barman, Toni, buried his brother alive to put a stop to his serial-killing habit. All in all, it’s the Rovers Return of The Returned. Lots of history here, and The Lake Pub’s real  “patron”, Julian, is unsurprised when I explain the nature of my pilgrimage.

“We’ve had two people from England just the other week, Australians, even Argentinians,” says Julian, who is better looking and more cheerful than Toni. The French aren’t as excited by The Returned, adds Julian. So while the show is met with a Gallic shrug in its own back yard, it won an International Emmy Award for best drama series in 2013, and was inevitably remade for American television (equally inevitably, the US version wasn’t as good as the original).

Shot all around this region, The Returned employs the usual filmic trick of making multiple locations seem like one place. One spot where, for various reasons, it isn’t filmed is the old town of Annecy – not to be confused with Annecy-le-Vieux, a residential quarter where in fact some of The Returned was filmed.

Annecy old town is otherwise known as “the Venice of the Alps”, which is rather overselling an otherwise undeniably picturesque ensemble of higgledy-piggledy streets and pretty canals. The Bruges (or Ghent) of the Haute Savioe, might be a more accurate description, although the concentration of tourists might bring to mind Venice. 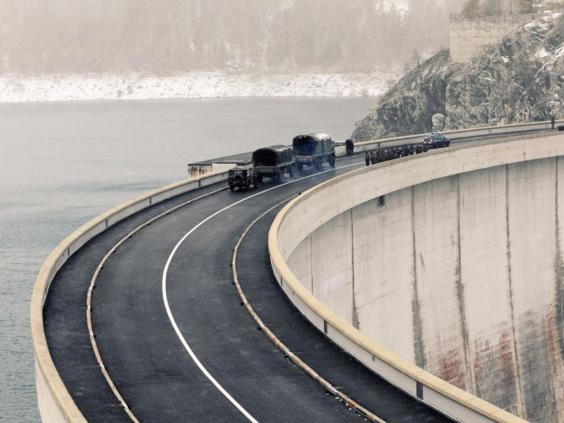 Tignes Dam in ‘The Returned’

The best view of the Château d’Annecy, a handsome set of buildings dating from the 12th century which once housed the lucky old counts of Geneva (Geneva is, by the way, the nearest airport), is from the water. And luckily there is no shortage of hireable options here, including pedalos, skiffs, kayaks and self-drive motor launches (no licence required). A tourist boat circumnavigates the lake in two hours, stopping off at villages along the way.

Unless crowds are your thing, these lakeside villages make a more agreeable base than the town itself. During my trip, I am staying in picturesque Talloires, which has its own beach and jetty where boats can be hired. If your budget can stretch to it, then L’Abbaye de Talloires, in a reconditioned 17th-century monastery, might well be my dream hotel.

On the peaks above the village, paragliders can be seen riding the thermals like gaudily coloured birds of prey. The Col de la Forclaz is paragliding central and Ed has kindly reserved me a ride (buckled safely to a professional). I tell him he has just described my worst nightmare, and instead settle for a sundowner on the terrace of the Edelweiss bistro, watching the subtle colour show as our nearest star drops below the eastern mountains.

Water is my element, and the water is heavenly – a clear but very slightly milky turquoise – and supposedly the freshest lake in Europe, partly thanks to the  extensive filtering reed banks. The  lake temperature in early autumn is  refreshing-to-bracing, but nothing that requires a preliminary cardiac assesment. On my last day I even manage a pre-breakfast plunge, which leaves my skin tingling for the rest of the morning.

It’s the sporty and outward-bound who would probably profit most from the area: bicycles can be hired from several locations, and bike lanes are plentiful, while there’s some excellent walking above the neighbouring village of Menthon-Saint-Bernard. This is where Camille’s house is located in The Returned, although attempting to find it behind the kilometres of dense leylandii hedges would be a fool’s game. Much more profitable is the half-hour climb to the Château de Menthon, probable birthplace of  St Bernard, the patron saint of skiers,  whose name lives on in those large, brandy-carrying rescue dogs. This medieval fortress is a beauty, and has been owned by the same family for nearly 900 years.

But back to The Returned, and its most famous location; the dam over which the coach crashed. The real dam is at Tignes – a two-hour drive away, in an area sprinkled with resorts well-loved by the British skiing classes – Courchevel, Méribel, les Arcs and Val d’Isère. Ed valiantly offers to drive there, but frankly I can’t get enough of Lake Annecy. Like Camille, Toni’s brother and the rest, I will return.

In this article:Annecy, television screens, The Returned